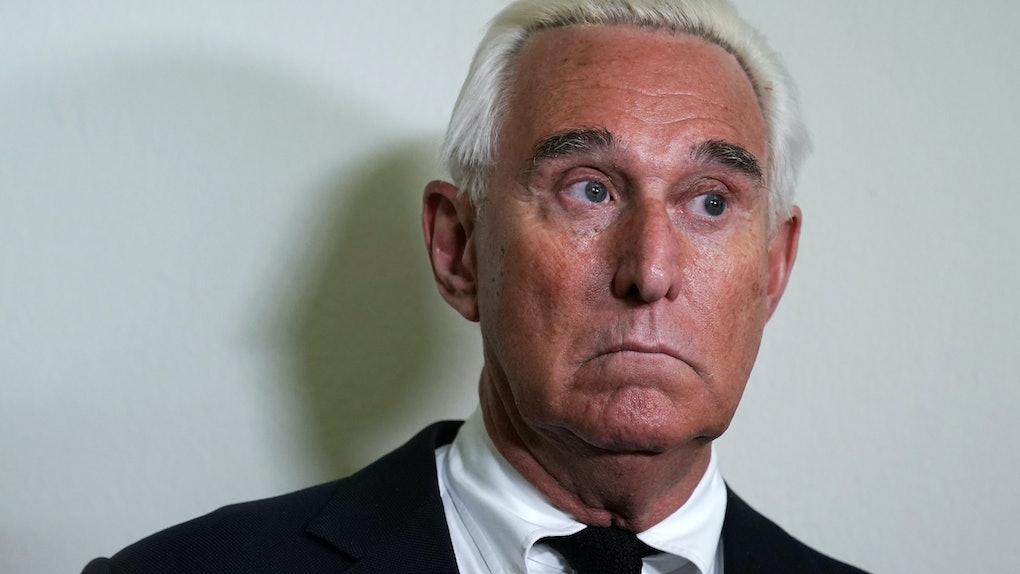 Roger Stone Has Been Indicted In Robert Mueller's Russia Probe, So Things Are Heating Up

Another day, another arrest in the Russia investigation. This time, Roger Stone has reportedly been indicted in Robert Mueller's probe into potential collusion between Russia and members of the 2016 Trump campaign, making him the sixth Trump associate to be pinched in the investigation. Representatives for Stone and the White House did not immediately return Elite Daily's request for additional comment. The special counsel's office declined to comment. Bet you didn't expect your Friday to start off like this, huh?

UPDATE: In a statement to reporters following his court hearing on Jan. 25, Stone said that he had been falsely accused and that he intended to fight the charges in court. “I look forward to being fully and completely vindicated," he said. He also "categorically" denied working with Russians, and said that he would not testify against President Donald Trump. “I have made it clear I will not testify against the president, because I would have to bear false witness against him [to do so]," he said.

EARLIER: According to CNN, Stone, a longtime associate of Donald Trump and self-proclaimed “dirty trickster,” was arrested in the early hours of Jan. 25 and indicted on one count of obstruction, five counts of making false statements and one count of witness tampering. According to the indictment filing, Stone made "multiple false statements" to the House Intelligence Committee about his interactions regarding "Organization 1" — which seems to be WikiLeaks, the organization that released a tranche of Democratic emails ahead of the 2016 election, which investigators say were stolen by Russia.

The indictment also says that after those emails were released, a text message from "an associate of the high-ranking Trump campaign official" was allegedly sent to Stone which said "well done," suggesting that the campaign knew of Stone's transgressions. It's unclear who the high-ranking Trump official is. The document goes on to say that an official followed up asking Stone “what other damaging information” WikiLeaks had “regarding the Clinton campaign."

Stone previously denied having any contacts with Russia, but later acknowledged that he had been in contact with WikiLeaks founder Julian Assange, and the back-and-forth seems to be what lead to some of his charges. Here's a full copy of the indictment.

Stone's lawyers shared a statement with CNN later on Jan. 25, which said their client is "vindicated" and that his alleged lies were merely instances of forgetfulness. The statement said in part: "They found no Russian collusion or they would have charged him with it. Roger Stone is vindicated by the fact there was no Russian collusion."

Stone himself had previously said he knew it was a "possibility" he could be charged in the probe, although he said that he wasn't too "concerned" about it since that would suggest culpability. As speculation about his potential arrest mounted, Trump tweeted about it back in December 2018, calling Mueller "rogue and out of control." He also quoted apparent comments by Stone that said he wouldn't be flipping on the president. The tweet read:

'I will never testify against Trump.' This statement was recently made by Roger Stone, essentially stating that he will not be forced by a rogue and out of control prosecutor to make up lies and stories about 'President Trump.' Nice to know that some people still have 'guts!'

Hmm. According to PBS News, Stone is due in court at 11 a.m. on Jan. 25. We'll start to see how this drama unfolds then.