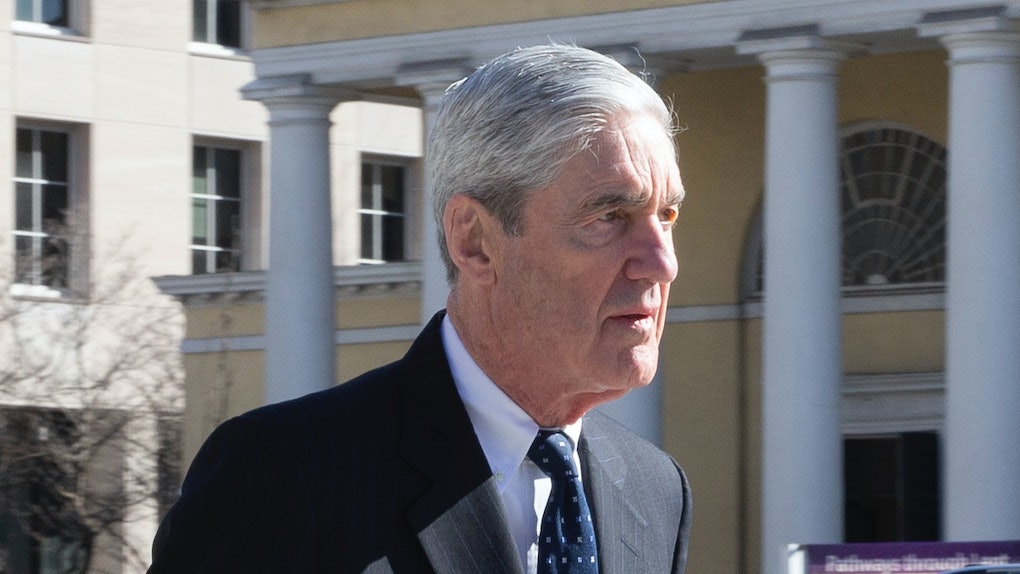 Since Special Counsel Robert Mueller gave the findings of his highly-anticipated report addressing any undue Russian influence on the U.S. presidency to Attorney General William Barr on Friday, March 22, Capitol Hill has been in an uproar. Despite calls from key Democratic officials like Nancy Pelosi and Chuck Schumer to promptly release the full report, Barr took a few days to put together the "principal conclusions" from the investigation before making them public. Now, the results are in, and William Barr's summary of the Mueller report has concluded that there was not enough evidence suggesting that the president colluded with Russian officials to influence the results of the 2016 presidential election. Elite Daily reached out to the White House for comment on the summarized report, but did not hear back by the time of publication.

On Sunday, March 24, Barr shared some of the report's key findings while shedding light on some of the biggest questions of the nearly two-year-long investigation, namely: If the Trump administration colluded with the Kremlin leading up to the 2016 presidential election and if the president attempted to obstruct justice and hide any wrongdoing by firing then-FBI Director James Comey. President Trump has long denied any wrongdoing and has repeatedly called the investigation a "witch hunt." In short, Barr quoted Mueller in his summary:

'The evidence does not establish that the President was involved in an underlying crime related to Russian election interference,' and that, while not determinative, the absence of such evidence bears upon the President’s intent with respect to obstruction.

However, Barr made sure to note that the report's findings also did not "exonerate" Trump:

The Special Counsel states that 'while this report does not conclude that the President committed a crime, it also does not exonerate him.'

Barr writes in the letter that Mueller's lack of "legal conclusiveness" leaves the determination to the Attorney General, and he said from there that he and Deputy Attorney General Rod Rosenstein "concluded that the evidence developed during the Special Counsel’s investigation is no sufficient to establish that the President committed an obstruction-of-justice offense."

Even before the Mueller report was released, many pointed to the fact that the special counsel didn't recommend any new indictments as vindication for the president, although it should be noted that the Justice Department has a policy that you cannot indict a sitting president. Still, it was previously rumored that Donald Trump Jr. and Jared Kushner — two attendees of the Trump Tower meeting — could be indicted, and Mueller's final report did not contain any new indictments. During the course of the special counsel's investigation, he indicted 34 people and entities and brought up charges against a few of Trump's former associates like Paul Manafort, Michael Cohen, Michael Flynn, and Roger Stone.

The partial release of Mueller's findings was a blow to lawmakers who'd previously urged the attorney general to share the full documentations from the report. After he received the report, Barr assured Congress that he was "committed to as much transparency as possible" and that he was consulting with Special Counsel Mueller and Deputy Attorney General Rosenstein as to what information to share with the public. The DOJ did not respond to Elite Daily's request for comment on whether the full Mueller report would be made public, following Attorney General Barr's letter.

Shortly after news broke that Barr had received the report on Friday, Pelosi and Schumer released a joint statement where they asked the attorney general to "make the full report public and provide its underlying documentation and findings to Congress." Elite Daily previously reached out to the DOJ for comment on their statement, but did not hear back.

The Special Counsel’s investigation focused on questions that go to the integrity of our democracy itself: whether foreign powers corruptly interfered in our elections, and whether unlawful means were used to hinder that investigation. The American people have a right to the truth. The watchword is transparency.

Before the report was made public, the president headed to his Mar-a-Lago estate in Florida to spend the weekend golfing with Kid Rock. Trump, who's oft referred to the long-running investigation as a "witch hunt" and has repeatedly denied that his administration collaborated with the Russians or that the U.S. presidency has any undue influence from the country, was uncharacteristically mum about the news that the investigation had wrapped up.

Now that the key findings from Mueller's explosive report have been shared, it'll be up to Washington to decide which legal and political actions to take, if any, moving forward.

More like this
The More Contagious B-117 COVID Variant Is Now The Most Common Strain In The U.S.
By Rhyma Castillo
These Tweets & Memes About Matt Gaetz's Venmo All Make The Same Joke
By Cianna Garrison
These Unique Gifts For Moms Are A Change Of Pace From A Bouquet Of Flowers
By Cianna Garrison
Stay up to date