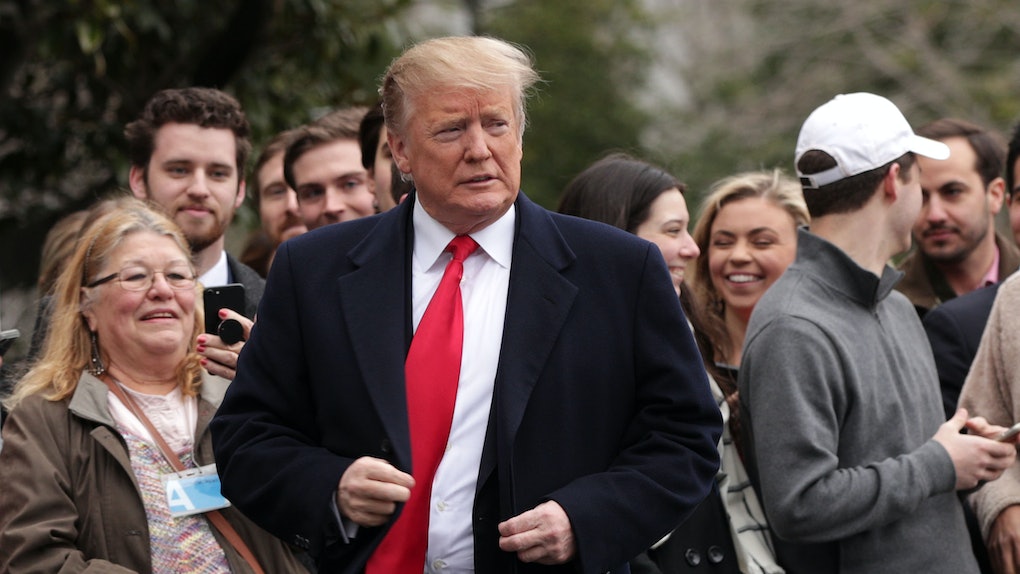 Two days after Special Counsel Robert Mueller submitted the long-awaited findings on his probe, the president is breaking his silence on social media. While he has referred to the investigation — which attempted to identify any collusion between the president's team and Russia during the 2016 presidential election — as a "witch hunt" in the past, Donald Trump's first tweets after the Mueller report surprisingly skirted around the subject of the probe. Elite Daily reached out to the White House for comment on the president's newest tweets, but did not hear back by the time of publication.

On Friday, March 22, Mueller marked the end of his investigation as he turned over the results of his probe to Attorney General William Barr. Barr is now deciding how much of the findings to make public. Elite Daily previously reached out to the DOJ for comment on the report, but did not hear back.

While several key figures in Capitol Hill, including Nancy Pelosi and Chuck Schumer, have called for the release of the full report to the public and Congress, it is up to Barr's discretion to decide what he shares. In a statement to Congress, the attorney general said that he would potentially be airing the "principal conclusions" of the report sometime this weekend.

Pelosi and Schumer said in a statement:

Attorney General Barr must not give President Trump, his lawyers or his staff any 'sneak preview' of Special Counsel Mueller’s findings or evidence, and the White House must not be allowed to interfere in decisions about what parts of those findings or evidence are made public.

The White House didn't respond to an Elite Daily email inquiring if the president has seen the contents of the report, but White House press secretary Sarah Sanders took to Twitter on Friday to share:

The next steps are up to Attorney General Barr, and we look forward to the process taking its course. The White House has not received or been briefed on the Special Counsel’s report.

As for the president, he was reportedly spending the weekend at his Mar-a-Lago estate in Florida. In addition to golfing with Kid Rock, Trump made an appearance at a fundraising dinner where he made a speech, although he notably made no mention of Mueller or the probe.

Sunday morning, March 24, he continued to stay mum on Mueller's report as he took to Twitter to wish his followers a good rest of the weekend with two cheerful tweets.

Thus far, the White House has said that the president has not been briefed on the findings on the report — which has yet to be shown to Congress. As Trump was leaving for his Florida estate on Friday, he made a brief statement to reporters where he continued to deny allegations that his inaugural team collaborated with the Kremlin during the 2016 election.

With pressure mounting in Washington in the aftermath of Friday's news, it's likely that Barr will be releasing at least some of the findings of the report to Congress and Trump sooner than later. In the meantime, all eyes will be on the president's Twitter feed.