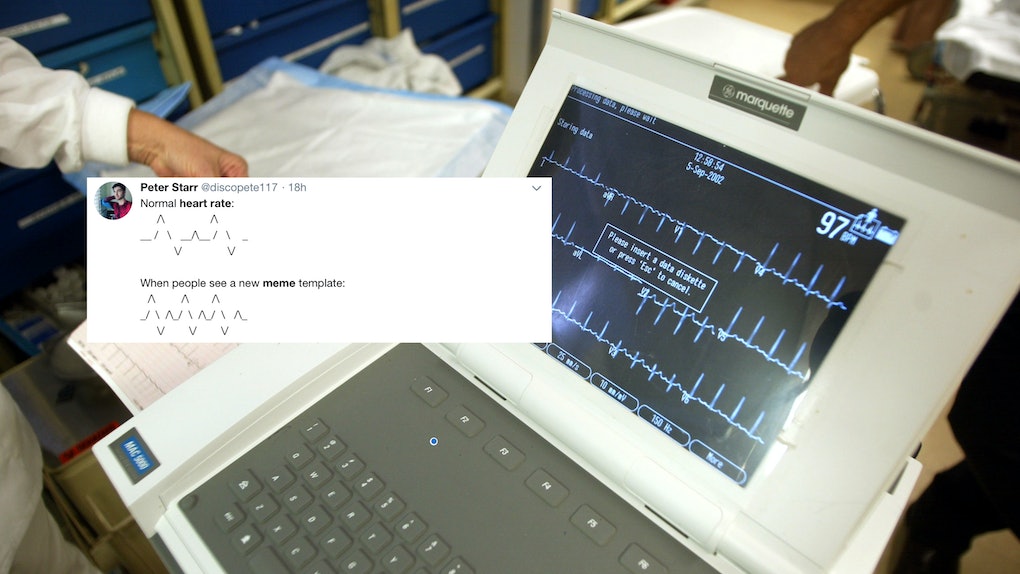 Another day, another new meme format. The latest meme making its rounds on Twitter and other social media pokes fun at the things that get peopled worked up and either increase or, in some cases, flatline their heart rates. TBH, these heart rate memes will have you laughing so hard you may have to check your own heart rate if you consume too many.

In recent days, a new meme format that can be called the "heart rate" has started circulating on the internet. The meme uses a series of dashes, slashes, and carets to convey the speed of a heart beat, and how it changes when something emotional happens or when something works a person up, and let me be clear, the results are hilarious.

The format itself is pretty simple. First, the meme depicts a normal heart rate as if it were on a heart rate monitor. It shows what your heart rate might look like if a person is simply sitting around, scrolling on a phone, or taking a relaxing walk. Next, the meme shows a more heightened "monitor reading," something someone's heart rate might look like if, say, you see you crush, when you're waiting for a date, when you taste their favorite meal, or when you forget all the studying they did for a big test. Some different versions of the meme show a normal heart rate and a flatlined one. What might make your heart flatline, you ask? Maybe if that crush you saw told you they didn't like Keeping Up With the Kardashians or the date you were waiting for said they weren't a dog person. At least, that what would make me flatline.

Here are some more heart rates memes that will have you laughing so hard your heart rate will go up.

Though the heart rate meme might be one of my 2019 faves, this year has blessed the internet with unprecedented amounts of good meme content. Take, for example, the recent "Old Town Road" memes that highlight Billy Ray Cyrus' featured verse and how good it is. The world has also been blessed with endless pop culture memes this year, like the one about Hannah G. from Bachelor writing in her diary, memes about Pete Davidson's dating life, and of course limitless content about The Avengers. There have also been a healthy amount of memes making fun of pop culture and political figures, like the memes that highlight the various absurd things Donald Trump says or the memes that emerged after J.K. Rowling said Dumbledore and Grindelwald had an "intense" sexual relationship.

While I loved all these memes, I'm personally a huge sucker for memes that incorporate images, visual components, or emojis like the heart rate meme did. That's why one of my favorite meme formats so far this year has to be the "summoning circle" meme which combines the phrase "summoning circle, hope this works!" with a circle made from candle emojis. People write different things in the center of the emoji circle like "happiness without Instagram," or "energy to get through a semester," or "clear skin."