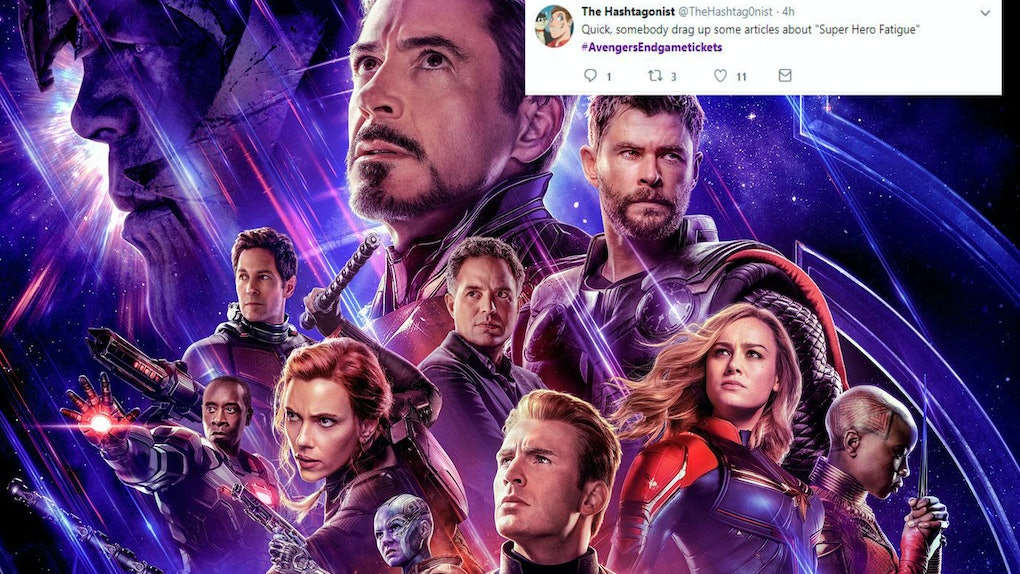 These Tweets About 'Avengers: Endgame' Tickets Will Make You Break A Sweat

When Marvel dropped the second trailer for Avengers: Endgame in mid-March, there was a palpable sense of confusion among industry watchers. Rickets didn't go on sale at the same time, a confusing bit of business. Infinity War tied the ticket sale announcement to the second trailer last year, right at the mid-March line. What was Disney waiting for? Apparently, the answer is, to interrupt everyone's morning and take them by surprise. These tweets about Avengers: Endgame tickets going on sale in the early hours of April 2 shows why Disney waited until the last minute. Scarcity, after all, breeds desire.

It helped that April Fool's Day was on Monday, leading those who heard rumors of a ticket drop on Tuesday morning to write it off as a prank or to miss the story entirely. Either way, the tickets, and the trailer that came with them set off a firestorm of frantic fans trying to purchase tickets. According to Deadline:

On Twitter, half-awake fans found themselves trying to buy tickets on their phones without their morning coffee. It went as well as could reasonably be expected.

Within minutes of the announcement, both AMC and Fandango's websites were down. By 8:30 a.m. ET, most fans were reporting sit5es either down or slower than molasses. Atom, which uses AMC as their vendor, also found themselves hosed, and though Cinemark did manage to process tickets, it took a considerable amount of time.

Considering this is the first of two major conclusions to long-gestating movie franchises, the results did not bode well for when Star Wars IX tickets go on sale this October. Perhaps AMC and Fandango will put more servers in place by then.

Social media accounts for companies scrambled to thank those who had long wait times for their patience. However, it didn't stop the complaining from those watching the little wheel spin as the site s.l.o.w.l.y. processed their requests, or the clever memes that resulted.

Some fans had ridiculous wait times.

Others turned to giffing their woes.

With such high demand and long waits, it wasn't long before some fans discovered they would get through, only to find the showing they were trying for was sold out. Some fans saw when they finally got through; the entire theater was sold out.

As you can imagine, that only added to the sense of hysteria to get tickets opening weekend.

Hopefully, everyone who wants tickets to Endgame's opening weekend will manage it. Avengers: Endgame opens everywhere in the US on Friday, April 26, 2019.