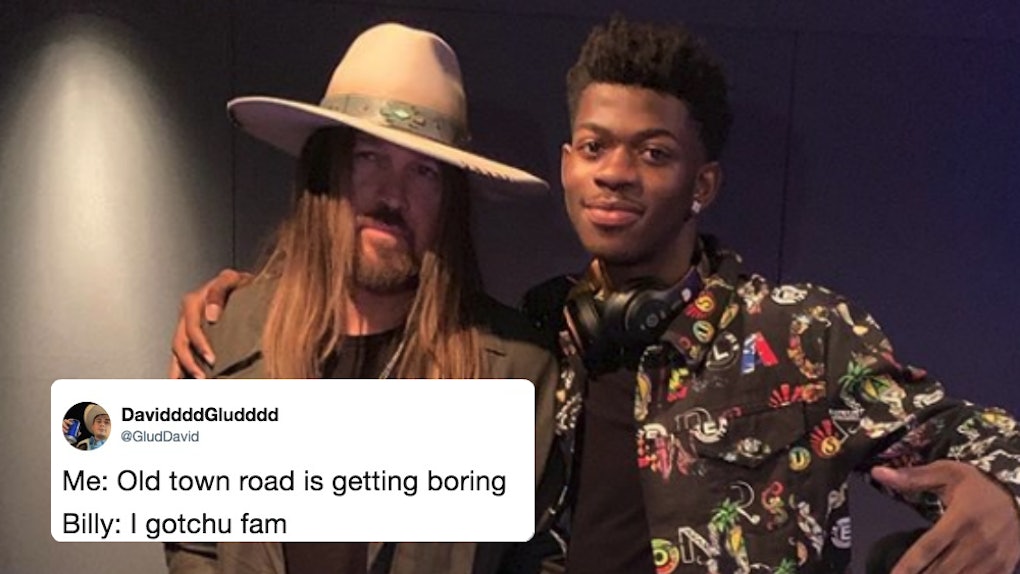 I'm embarrassed to say I was late to the "Old Town Road" movement, but I'm damn happy to be here now. Rapper and musician Lil Nas X is at the forefront of music industry headlines right now thanks to his unusual hit, and now Billy Ray Cyrus has gotten involved. After Lil Nas X's hit single got unceremoniously removed from the Billboard country charts for not being country enough, the young hip-hop artist teamed up with the country vet (and Miley Cyrus' dad) to propel the track to brand new cross-genre heights. And they're bringing a slew of hilarious memes with them. These "Old Town Road" memes are a delicious bite of what can happen when two beloved musical genres collide and the internet is here for it.

Here's the drive-by on this song's history: Lil Nas X created the track by pairing a bumping bass and snappy drum beat with what sounds to me like a banjo in a musical hybrid he's dubbed "country trap." The lyrics have the tell-tale characteristics of a classic country hit. References to things like boots, horses, cowboy hats, porches, tractors, a country twang, and yes, even an "old town road," which altogether tells the most amateur music guru this song is country. The hybrid actually debuted on Billboard’s cross-genre Hot 100 chart, Hot Country Songs chart, and Hot R&B/Hip-Hop Songs. NBD.

Here are some of the opening lyrics:

And here is the original track:

However, Billboard seemed to give it a weird and random second thought, and ultimately removed "Old Town Road" from the country category, reportedly telling Lil Nas X that "his inclusion on the ranking was a mistake." Billboard did not publicly address the change but did tell Rolling Stone in a statement:

... Upon further review, it was determined that ‘Old Town Road’ by Lil Nas X does not currently merit inclusion on Billboard‘s country charts. When determining genres, a few factors are examined, but first and foremost is musical composition. While ‘Old Town Road’ incorporates references to country and cowboy imagery, it does not embrace enough elements of today’s country music to chart in its current version.

And fans are eating the remix up. You can listen to it below:

The memes that have stemmed from the controversy and subsequent collaboration are amazing. Country fans are converting to rap fans and vice versa. Somehow, this song has become a musical equalizer.

Lil Nas X probably said it best when he shared a series of photos with Mr. Cyrus on Instagram. He wrote, "BILLY F*CKIN RAY!!! 🐎⚡️"

One thing is clear: Whether it passes Billboard's "country" test or not, Twitter will listen to this song until they literally can't no more.

More like this
How To Do Olivia Rodrigo's "Deja Vu" Challenge On TikTok Like Charli & Addison
By Rachel Chapman
These Tweets About Taylor Swift's "Mr. Perfectly Fine" All Ask 1 Important Question
By Sydney N. Sweeney
I Tried Singing While Running Like Miley Cyrus & OMG, My Lungs
By Rachel Varina
Stay up to date