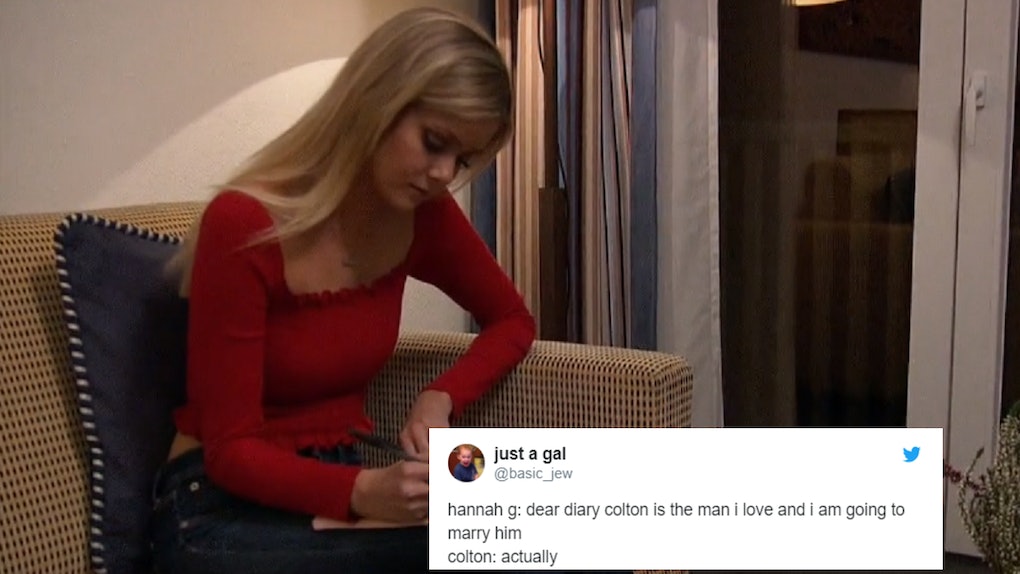 These Memes Of Hannah G. Writing In Her 'Bachelor' Diary Will Crack You Up

Bachelor Nation was in for a heartbreaking night during the first part of Colton Underwood's Bachelor finale. The March 11 episode focused primarily on the former NFL player's decision to say goodbye to Hannah G. and Tayshia after contestant Cassie, who he loved, sent herself home. Both breakups were pretty emotional, but Bachelor fans excel in finding the comedy within tragedy. These memes of Hannah G. writing in her Bachelor diary before Colton dumped her are hilarious, and I just hope she can find some solace in them after her Bachelor days.

ICYMI, Hannah G. was left somewhere in a Portugal hotel room while Colton went on dates with Tayshia and Cassie, parted ways with Cassie, and broke up with Tayshia. The initial recurring joke on Twitter was that Hannah was essentially wandering in a pit of isolation while the other women met with Colton. At her "After the Final Rose" appearance, Hannah even revealed that she didn't know Colton went on other dates before seeing her. Just how long was she in this hotel room?

When Colton finally arrived at her room, their goodbye wasn't pretty. Colton told her he once wanted his final woman to be her and that he wasn't even sure if picking Cassie over her was the right decision. Hannah was totally blindsided, having felt so certain that the show would end with the two of them together. During the finale's live portions, she delivered a fiery manifesto claiming that she was stronger than ever before because of the breakup.

"I felt really empowered being able to talk to him about a moment that I had been holding onto for months," Hannah told PEOPLE at the "After the Final Rose" special. "There are still some open wounds. But I don’t want to be bitter anymore. And I’m ready to live in the present again.”

Fans loved Hannah's girl power moment, but thanks to the shot of her writing in her journal before the Colton storm arrived, they were a tad more invested in poking fun at the record of her deep thoughts. The image of Hannah writing went viral on Twitter, prompting many "Dear Diary" captions that have me LOLing. Between imagining her sequestered experience and Colton ruining her visions for the future, fans have definitely gotten creative with their ideas.

Some viewers also used the shot as a nod to Hannah G.'s rapping skills and what seems like the novel she's writing about her Bachelor role. Plus, the visual of a blonde girl writing in a notebook couldn't help but ring up memories of Mean Girls, Regina George's Burn Book, and the movie's reference in Ariana Grande's music video "Thank U, Next."

We have to wait and see if a Bachelorette title is in Hannah's future, but if not, it looks like she's found the gag of her Bachelor in Paradise intro. Let's hope she won't have to write about boys breaking her heart again if she hits the beach this summer!