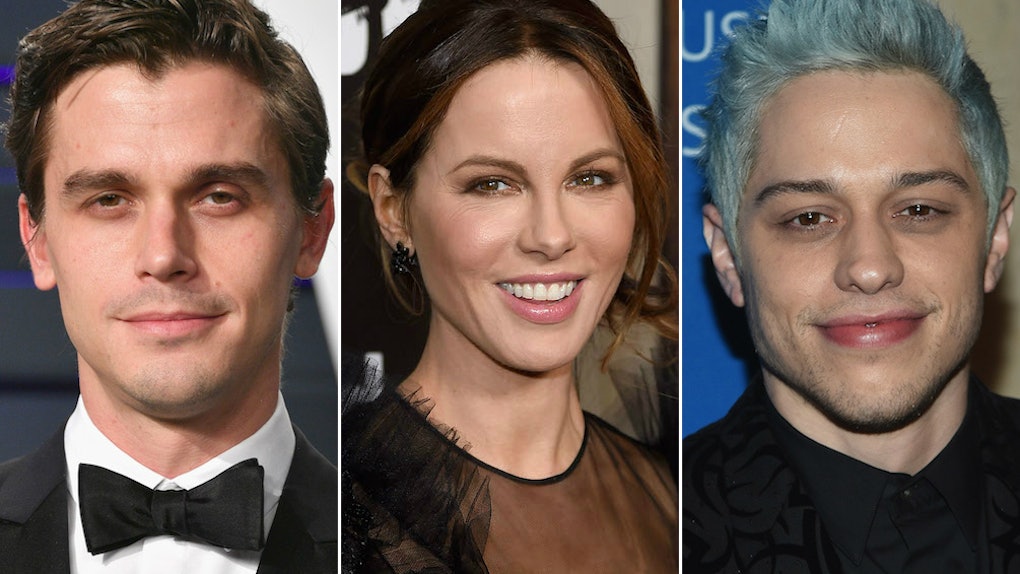 Kate Beckinsale and Pete Davidson are hooking up, and that's a sentence I never thought I'd write. But here we are! And Antoni Porowski got thrown into this! Not because they're all hooking up (but oh, what a wonderful twist that would be!), but because he was sitting right next to Beckinsale as she made out with Davidson at a hockey game (more sentences I never thought I'd write), and now it's a meme. And Kate Beckinsale's reaction to the Antoni third-wheeling meme is sure to make you LOL.

Honestly, who knew that Ariana Grande and Pete Davidson's breakup would open the door for Pete Davidson and Kate Beckinsale to become a thing? Random as hell! But that's 2019 for ya, I guess. Antoni Porowski memes have been popping up like daisies in spring in response to the photos of Beckinsale and Davidson making out. In case you haven't seen those, the two actors were photographed intensely making out at a hockey game in NYC recently. The photos show Davidson literally putting his full tongue into Beckinsale's mouth, so that's cute.

And now, I give you some dank memes.

The meme labeled Davidson as "Guys with problems from childhood who I can 'fix,'" Porowski as "Wholesome guys with good paying jobs who text back and have no baggage," and Beckinsale as "Me." Excellent meme content, truly.

Beckinsale commented on the meme saying, "Antoni is gay, if that helps clarify at all #queereye." Oh, Kate. You jokester. Porowski has actually made clear in the past that he sexually identifies as more fluid than just gay, but I get where Beckinsale was going with this. It's not entirely correct, but I get it.

Beckinsale and Davidson being a thing has got to be the most random celebrity hookup I've seen in a while. And I thought Grande and Davidson were random. The two reportedly hit it off at a Golden Globes afterparty in January and have been casually hanging out ever since. Elite Daily previously reached out to Davidson and Beckinsale's teams for comment on the nature of their relationship, but did not hear back by the time of publication.

A source told E! News that the two, while an admittedly random pair, just vibe with each other.

"You wouldn’t necessarily put them together, but it’s working for now," the source said. "[Kate is] excited about getting to know him and hoping to spend more time with him ... The biggest thing going for Pete is his humor. He always has her laughing and that’s a good feeling to have." Elite Daily reached out to Beckinsale and Davidson's teams previously for comment on the report, but did not hear back by the time of publication.

Beckinsale's ex, Matt Rife (who is also a comedian), recently made some, uh, interesting comments about this relationship.

Rife told TMZ that his one-year relationship with Beckinsale was "complicated," but that he wishes her and Davidson the best. Elite Daily reached out to Beckinsale's team previously for comment on Rife's comments, but did not hear back by the time of publication.

“Advice for Pete? Man to man … run,” he told the outlet on March 4. “Enjoy it while you can. I hope they’re both happy. I hope that it can build to where it’s an established, good relationship. I don’t know. I don’t know what to tell you. I haven’t spoken to her in a while. I haven’t spoken to Pete in about the same amount of time, if not longer.”

“We dated for a year… it was complicated," he continued. "For sure. A lot of ups and downs. But she’s moved on. I wish them both the best. I hope they’re happy. I don’t really have any solid advice. Just be careful.”

Uh, OK? That is... a concerning comment? What are you trying to imply, dude? Whatever, Imma go look at more Antoni memes.