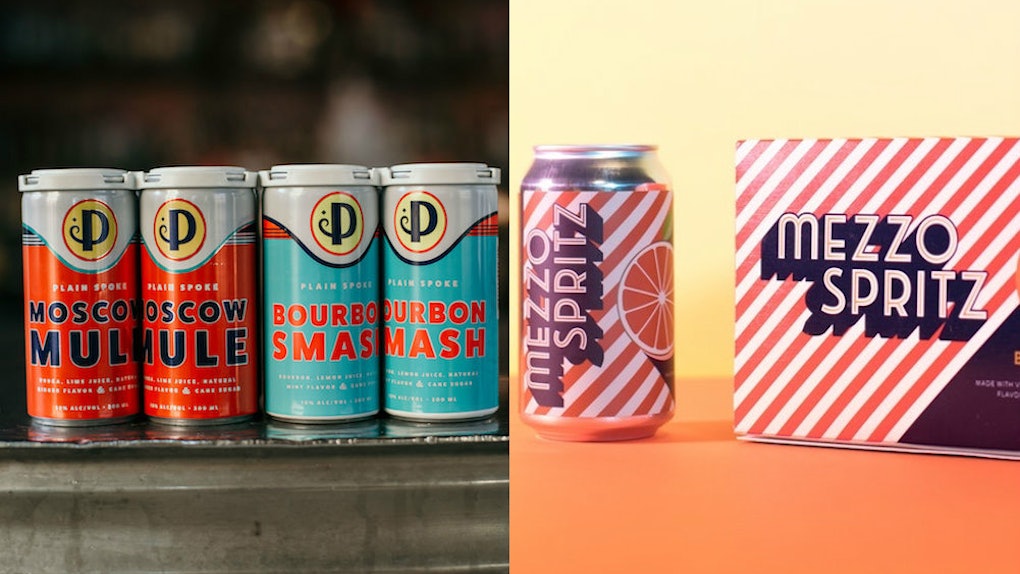 By now, canned alcoholic drinks have most likely popped up on your radar at some point or another. In the last couple of years, ready-to-drink beverages have skyrocketed in popularity, and I totally get why. While they're excellent for minimizing spillage, they also make beverage transportation far easier than ever before, so you don't have to lug around a pitcher, mixology tools, a bottle of wine, or even a corkscrew all day long. And if you, too, simply can't resist a little added on-the-go convenience, here are 9 canned alcoholic drinks to try this summer. Honestly, each and every one of them are really, really fantastic options.

Maybe some ice cold rosé is your jam; or you might prefer a refreshing margarita; you may have even hopped on that ever-popular Aperol Spritz train. Whatever your sip of choice, you're almost certain to find a canned variety of if. And while absolutely nothing will ever surpass a freshly mixed (or poured) beverage, canned alcoholic drinks are — in fact — the future of sipping. To be completely honest, I'm not mad about it, not even in the slightest. There are so many different brands that offer canned versions of their boozy products, and there are a ton of really solid flavors. So, make sure to check out a handful of my favorite ones, below.

The Craft Brew Alliance (aka the CBA) launched a new company called the pH Experiment, and they're releasing a series of canned alcoholic beverages. The first product is called the Pre Aperitivo Spritz, which is described as a flowery, bubbly beverage that tastes just like your classic Italian aperitivo. It's available in a six-pack of 12-ounce cans and clear bottles. It's also gluten free, and it boasts a 6.6% ABV.

Midwestern-based spirits company UV Vodka created a new ready-to-drink cocktail called UVGO. It's a sparkling beverage with an ABV of 5%. Each canned cocktail is made with all-natural ingredients, and they come in a variety of classic flavors, including Blue Raspberry, Lemon Lime, Black Cherry, and Pink Lemonade.

Plain Spoke Cocktails is a Wisconsin-based company that makes all-natural canned mixed drinks, according to the brand. They come in two classic flavors: Moscow Mule and Bourbon Smash. Per the band, there is a third not-yet-revealed variety launching this summer. You can locate where they're sold on the website to find some for yourself.

If canned rosé is more your vibe, check out JaM Cellars' CandyCans. Each one is fruit-forward with notes of spring flowers, according to the brand, and they're sold in four-packs for $19.99. Each can contains 250 milliliters of wine, and they can be found in most grocery stores nationwide. Just check their store locator to be sure where you can snag a pack by you.

In March 2019, the founder of Virtue Cider released a new canned beverage called the Mezzo Spritz. Loosely based on the ever-popular Aperol Spritz, per the brand, it's made with Virtue Cider, sparkling water, and refreshing botanicals. It contains 3.5% ABV, which, IMHO, is perfect and light enough for a hot summer day.

If you've never had a Michelada, I'll fill you in: It's a beer cocktail that originates from Mexico. However, heading to the home country of the Michelada isn't as easy as sipping a recreation. Mexican beverage brand Estrella Jalisco created a mango-flavored canned Michelada, according to the brand. It features all the ingredients of the classic drink with Clamato Picante. You can order them online via Total Wine's website for $3.29 per can, or you can locate where to buy them on their website.

A new brand of canned wines called On Y Va recently launched slim 250-milliliter (aka 8.4 ounces) limited-edition canettes of Sauvignon Blanc, according to the brand. The wine is sourced from France's wine country in the Loire Valley. On Y Va cans will be available on wine store shelves nationwide as of June 2019, in four-packs that cost $32 each.

You're probably familiar with Anheuser-Busch's line of Ritas drinks, but now, the flavored malt beverage comes in the form of new Ritas Spritz cans. They boast a "lower alcohol content" (6% ABV) than the classic Ritas, as well as fizzy refreshing flavors. You can choose from among many flavors, like White Peach Rosé, Pear Orange Sangria, Strawberry Blueberry Sangria, and you can buy them at most major retailers nationwide.

Coffee liqueur company Kahlua recently released a ready-to-drink Kahlúa Espresso Style Martini. It's a canned cocktail that combines Kahlúa, coffee, and what every martini needs: vodka. They're sold in packs of four cans at select retailers nationwide, and each can contains 4.5% ABV. It's a great brunch alternative to mimosas, if you ask me.

There are so many canned alcoholic drinks out there, which are perfect for picnics, BBQs, or rooftop happy hours. Regardless of what you choose, though, I can guarantee you'll end up having a grand time (with minimal spillage, of course!).