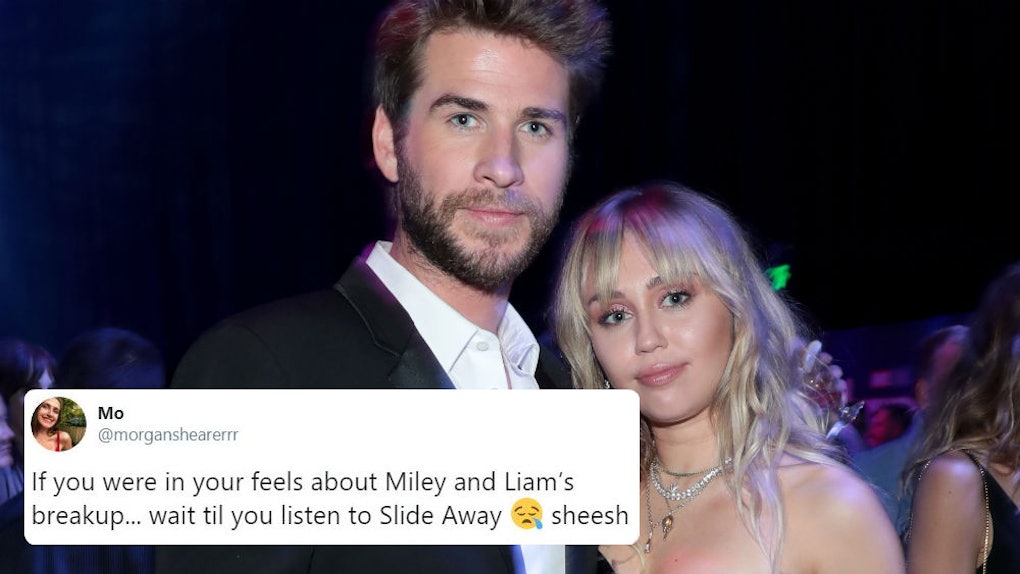 Wow. Miley Cyrus is really putting it all on the table when it comes to her breakup with Liam Hemsworth. On Aug. 16, Cyrus dropped a surprise song, which would usually be cause for celebration. But in the case of her new song, "Slide Away," fans are loving the song's artistry, but the message behind it has them gutted. The tweets about Miley Cyrus' "Slide Away" really capture how heartbroken the world is over Cyrus and Hemsworth's breakup.

It doesn't take a rocket scientist to analyze the meaning behind Cyrus' new track. The lyrics seemingly lay out what led to Cyrus' split from Hemsworth without actually mentioning his name. But she doesn't need to. There are more than a few lines in the song that allude to Hemsworth and her relationship with him.

In the very first verse, Cyrus sings, "Think I’m gonna miss these harbor lights / But it’s time to let it go," which seems to reference Australia and the Sydney Harbour.

It seems pretty clear the song is about Cyrus and Hemsworth growing apart and Twitter is utterly devastated.

Fans of Cyrus who are also fans of Taylor Swift can't help but feel like they're having emotional whiplash after listening to "Slide Away." Swift also released the title track off her new album Lover on Aug. 16, and the message behind her song is a complete 180 from Cyrus'. While "Slide Away" tells the story of lovers growing apart, Swift's expresses the desire to be close to her lover forever.

Cyrus and Hemsworth's reps announced that they were separating after only eight months of marriage on Aug. 10, and since then, both Cyrus and Hemsworth have posted about their split on Instagram, or at least alluded to it.

In her post, Cyrus opened up about not fighting evolution, but didn't directly address the breakup, writing:

Don’t fight evolution, because you will never win. Like the mountain I am standing on top of , which was once under water , connected with Africa , change is inevitable. The Dolomites were not created over night, it was over millions of years that this magnificent beauty was formed. My dad always told me “ Nature never hurries but it is always on time”.... it fills my heart with peace and hope KNOWING that is true. I was taught to respect the planet and its process and I am committed to doing the same with my own ....

Hemsworth's post about the breakup was much more direct, explicitly confirming all the breakup news. He wrote,

If you were looking for a more direct quote about the breakup from Miley, it sure seems like "Slide Away" is it. You can listen to the emotional track below.

More like this
I Tried Singing While Running Like Miley Cyrus & OMG, My Lungs
By Rachel Varina
These Tweets Comparing SuperM's "We Do" To BTS' "Dynamite" Video Are So Split
By Michele Mendez
These Tweets About BTS' 'Bang Bang Con 2021' Sum Up The Epic Performance
By Cianna Garrison
Stay up to date