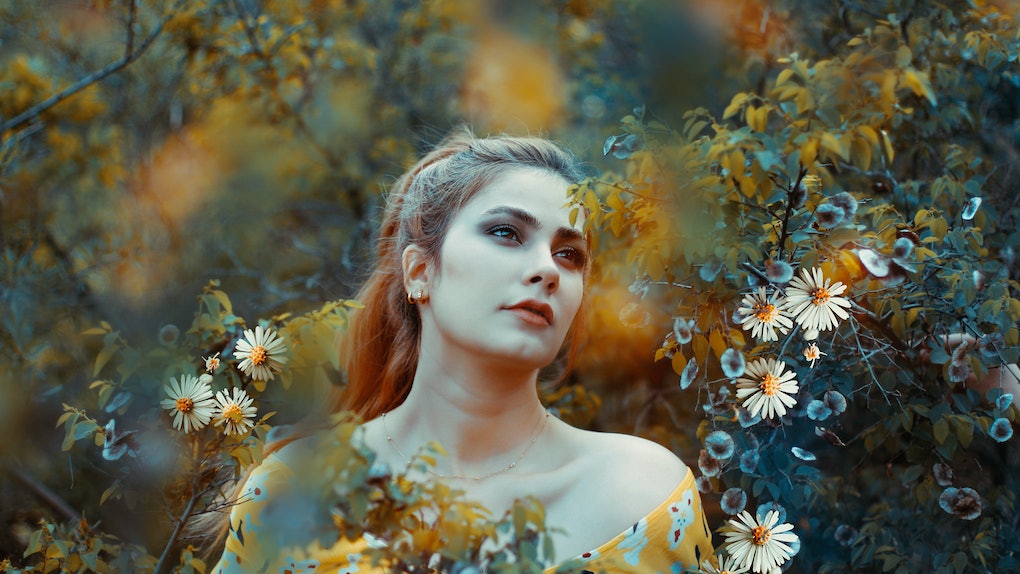 The Spiritual Meaning Of Scorpio Season 2020 Is About Transformation

A caterpillar doesn't become a butterfly overnight — it's a process. Time really is the best medicine, but the sacred symbolism behind every metamorphosis deeply connects to Scorpio's mystifying essence. With this in mind, it's no secret that the spiritual meaning of Scorpio season 2020 has a lot to do with transformation, both from an individual and collective standpoint. The divine order of the zodiac wheel perfectly embodies the stages of human development — along with the struggle for greater consciousness — and Scorpio's zodiac archetype plays a significant role in the process.

In addition to being an elusive water sign — enigmatic by nature and unusually intuitive — Scorpio's modality is fixed, which means it's unadaptable and unmoving. This modality is specifically meant to sustain, secure, and stabilize, but with the help of Scorpio's element, water, it's expressed through emotion, intuition, and the unconscious. Scorpio's polarizing essence is nothing short of perplexing, not to mention utterly intimidating; only a fixed water sign could fulfill this divine duty. Everything from its psychic connection to the afterlife to its general fluidity is ever-present, which makes its magic almost tangible.

Governed by Pluto — planet of death, regeneration, taboo, and all things hidden beneath the surface — it's no wonder Scorpio's aura is so hypnotic. Pluto is the Roman version of the Greek god Hades, often referred to as the King of Hell, in case you're wondering which zodiac sign wins "Most Likely To Be A Vampire." Scorpio wants to merge with another mind, body, and soul. Once they get a hold of it, they'll never let go. Look into the eyes of a sun in Scorpio native, and chances are they'll carry your essence behind their eyes and in the depths of their psyche for all eternity.

Scorpio is a product of Hades, which is where this fixed water sign gets its reputation for being "evil," when in reality, it simply symbolizes the darkest parts of the human psyche. It's easy to feel intimidated by what this sign stands for, but it also reminds you to embrace both the yin and yang, which are already alive in you; you are a perfect hybrid of the light and the dark. Change is the only thing that's constant, and with this Pluto-ruled season officially in session, it is your divine duty to surrender to its mystifying vibration.

For more context, check which of the 12 astrological houses belongs to Pluto-ruled Scorpio in your birth chart. This is precisely where the sun will beam is majestic rays, energizing and revitalizing you, for the time being. If you're still unsure, think back to some of the most passionate and/or transformative moments in your life. Despite how coincidental it may sound, it's likely between the months of October and November. Autumn is a season of mystery, but also of reflection as we begin to descend into the darker half of the year. This is all reflected on your individual and collective experience.

Astrologically speaking, exploring the positioning of Scorpio's planetary rulers, Mars and Pluto, can help you determine more about this year's season, along with what you can expect energetically. Seeing that Mars is retrograde until Nov. 13 is very telling, as it is the planet that governs Scorpio's raw passion and external expression. Mars is the planet of aggression, assertion, carnal instincts, and sex; its retrograde journey naturally puts a damper on Scorpio's sexually charged nature, so don't be discouraged if things haven't been all that great between the sheets.

More importantly, with Scorpio's modern ruler, Pluto, traveling together with Saturn and Jupiter in Capricorn, there's a natural emphasis on government systems, previously set structures, and one's sense of authority. Traditions are crumbling, both at an individual and global level, so if something's hanging by a string, chances are it no longer serves you. Let it go, and don't you worry. You'll be reborn again in the springtime.