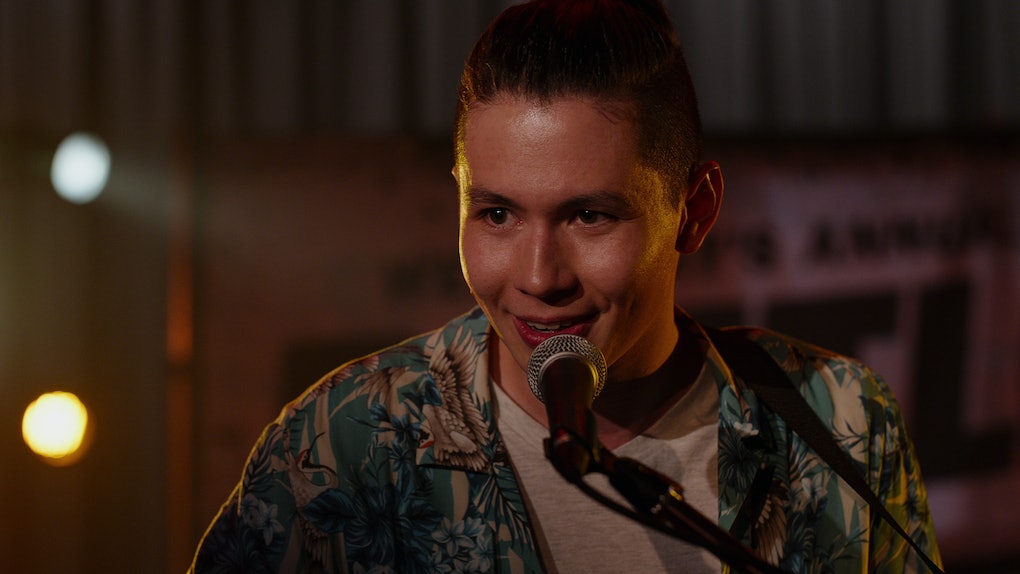 It's hard not to fall in love with the characters on Netflix's Ginny & Georgia, especially when romance is at the center of the storylines. Love triangles, estranged partners, and secret flings abound in the 10-episode first season. While every character has their own allure, Ginny's boyfriend, Hunter, might be the most charming of them all — thanks in large part to his sweet serenade for Ginny on the show. After learning the lyrics to Hunter's song, "I Can Barely Breathe," on Ginny & Georgia, there's a good chance you'll be swooning right along with Ginny and her MANG pals.

Hunter's good looks and kind heart already make him the dream teen BF, and his musical talent sweetens the deal. Throughout the first season, he does everything from play guitar to tap dance, but it's the song he wrote for Ginny that'll really take your ~breath~ away.

The song, "I Can Barely Breathe" was written for the show by Greg Shulman and Agatha Kaspar and is performed by Temple and Rebecca Ablack (who plays Padma in the show). Hunter and his band performed the song at the town's Battle of the Bands competition, which came at the perfect time since Ginny was questioning her connection with Hunter after sexting him and not receiving a reply.

To show her how he really felt about her, Hunter performed the song at the competition, earning not only first place, but Ginny's heart as well. After really listening to the lyrics, it's easy to see why.

I can't breathe when you are near

I don't know how to tell you

From the moment I met you my heart grew

And I think of you every day

When my life was in the darkness

You say words that I wanna hear

You mean everything and more to me

That's all I wanted you to know

And when I hold you tightly

I can't breathe when you are near

And I really, really wanna drown your worries and your fears

With you I cry no tears

And I can barely breathe when you are near

More like this
'Ginny & Georgia's Sara Waisglass Has Big Dreams — & They Involve 'SNL'
By Lexi Williams
'Never Have I Ever' Season 2: Release Date, Cast, Trailer, Photos, & More
By Ani Bundel
Netflix Renewed 'Bridgerton' For Seasons 3 & 4, Likely With More To Come
By Ani Bundel
Stay up to date