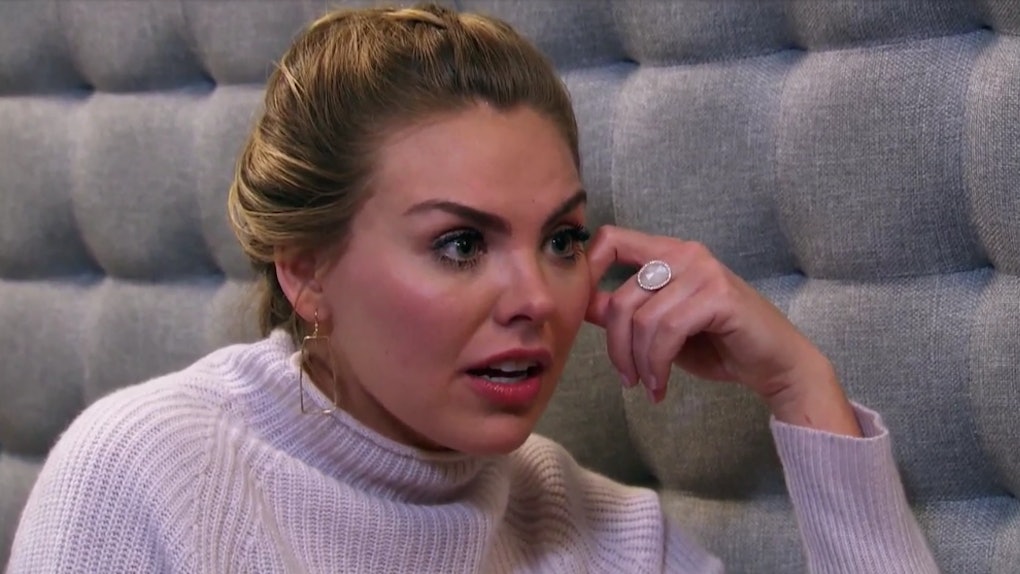 Hannah B.’s season of The Bachelorette has been full of unexpected plot twists (like, uh, basically any scene involving Luke P., who continues to prove that yes, he can get worse the more you get to know him). But the one moment I can’t stop thinking about? Hannah’s explosive takedown of Luke P. on the July 15 episode after he tried to shame her for having other physical relationships on the show. The Bachelorette’s Hannah B.’s thoughts on sex and religion remind me of my own struggle to overcome guilt and stigma related to my sexuality. Her fierce ownership of her body and her choices makes me feel personally invested in her journey.

In the July 15 fantasy suites episode, during Luke P. and Hannah’s dinner date in Crete, Greece, Luke revealed his concerns about Hannah’s relationships with the other men. “Let’s say you have had sex with one or multiple of these guys, then I would be wanting to go home,” he told her. This did not sit well with Hannah, who told Luke she wouldn't stand for him making her feel ashamed, and ultimately asked him to leave. As they walked to the car, Luke refused to get in, so Hannah proceeded to tell him about having sex with Peter in the windmill (twice). And then, came the quote that might be Hannah’s most iconic of the season: “I have had sex, and honestly, Jesus still loves me.” Luke finally got in the car, and Hannah flipped him off as he rode away in the pouring rain. Boy, bye.

These strong words from Hannah cut straight to my heart because they reminded me of my own personal story. Like Hannah, I grew up in the South, competed in pageants, and felt an overwhelming pressure to be perfectly poised and articulate at all times. (Hannah told the Alabama Newscenter in May 2018 that she has dealt with the pressure of high expectations placed on her by the pageant community.) And I, too, felt shame about my sexuality for many years. Southern Christian purity culture affected my views on sex in a way I’m still working through as an adult. I learned that sex belonged in the context of marriage, and that a woman was “used goods” if she gave her virginity to someone who wasn’t her husband.

Although this message didn’t come directly from my parents (who were progressive and open-minded), the religious environment where I grew up in Tennessee made me afraid of intimate relationships. While young men were fed the message that their sexual urges were “natural,” women were taught that their virginity was a gift to be given away only once — to their husbands. Throughout middle and high school, I feared that getting physically involved with someone would make me feel bonded to them for life. And if we broke up, I’d never be the same again. It wasn’t until college that I began to unpack the cultural norms that led me to feel such confusion, and now I’m slowly learning to love my body for the joy and pleasure it can bring.

Hannah B. may feel confident embracing her sexuality now, but she hasn’t always been this self-assured. During her one-on-one with Colton, which aired on the last season of The Bachelor back on Jan. 14, Hannah shared that she felt shame after losing her virginity before she got married. “There was a lot of guilt, and it killed me,” she told Colton. “I don’t feel perfect because I can’t give [my virginity] to somebody.”

It was the first glimpse viewers got into Hannah’s deep insecurities and fears about intimate relationships. It was also the first moment I felt a strong kinship with her. Here was this woman sharing her personal experience with purity culture — and how it’s continued to affect her life — on national television, and it helped me feel like my own story had meaning. I’ve met other friends who have risen above religious stigma and learned to embrace their sexuality, but I’ve never seen someone talk about it so candidly on a national stage.

Now, as the Bachelorette, Hannah is tackling the tricky subjects of sex and religion head-on. She has admitted that the subject of sex still carries a lot of weight for her, telling ET on May 21 that she “struggled with what I was going to do with fantasy suites.” But at the same time, she’s quick to shut down any attempts to shame her for enjoying physical relationships on the show. “Nobody’s going to judge me, and I won’t stand for it,” she told ET. “I’m going to speak my mind.”

This new episode isn’t the first time Luke P. and Hannah have argued about sex on the show. In the June 24 episode, Luke freaked out after Hannah went on a naked bungee-jumping date with Garrett, saying, “Her body is her temple, and to expose it to anyone who isn’t her husband, that’s a slap in my face.” Hannah found his comments hurtful, and she told him so. “It wasn’t a sexual thing,” she said of her date with Garrett. “But even if it was, at this point, it doesn’t matter because you’re not my husband. You don’t own my body, you don’t own me. It’s my body.” Get. It. Girl.

I love seeing a celebrity talk openly about how she’s overcome purity culture and embraced her sexuality. And Hannah is doing just that — from her steamy make-out scene with Peter in the hot tub, to calling Luke P. “dessert,” to the windmill sex reveal, she’s all in on the physical chemistry with her suitors. And she’s proud of both the physical and emotional connections she’s building. “My mama always told me to try before you buy… and I’m having a great time,” she tweeted on June 12. And in response to the hate from other Christians she’s been getting on social media, Hannah says she refuses to feel ashamed. “I’ve lived my life for the world to see and judge and absolutely, I’m a hot mess on a stick, I blew it a few times,” she wrote in an Instagram post on June 25. “But I refuse to believe I give Christians a bad name.”

Unlike me, Hannah continues to feel connected to her religion, even praying out loud on the show before going on dates. And in my opinion, her Christian faith makes her progressive attitudes about sexuality all the more inspiring. No one should be made to feel like she is “less than” because she enjoys and pursues physical relationships — if anything, a healthy sex life is something to enjoy and be proud of.

Just because Hannah is savoring her chemistry with multiple men doesn’t mean she’s any less serious about finding lasting love. Enjoying physical relationships while dating, but also pursuing partners with care and intention, do not have to be mutually exclusive ideas. In fact, I’d argue that a physical relationship can help deepen and grow your emotional bond with someone — it can actually be part of developing a meaningful long-term love.

Hannah B.’s season is my favorite in Bachelor franchise history (and that’s saying a lot, because I’ve been a fan since Sean Lowe first stole my heart in 2013). She has a fighting spirit, and that’s why her message is important for anyone who has ever felt shamed or judged about their sexual history. You have the right to use your body in whatever way you’d like, and your physical relationships are just that — yours, and no one else’s to criticize. Hannah may be dating in an unconventional way (with 30 suitors on national television), but she sure as hell won’t let anyone make her feel guilty for her happiness. And that’s a "beast" if I've ever seen one.