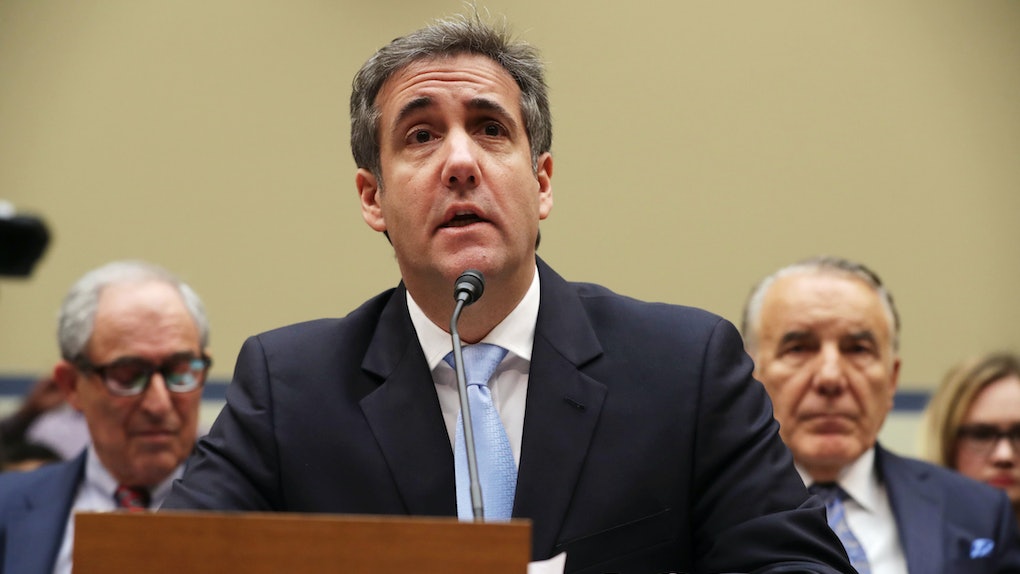 Well everyone, the day we had all been waiting for has finally arrived. On Wednesday, Feb. 27, Donald Trump's former lawyer, Michael Cohen, sat down in front of the House Oversight Committee to spill some serious tea, and it was piping hot. In case you couldn't tune into this juicy ordeal, these are the seven biggest moments from Cohen's hearing, so peruse and enjoy.

Across the nation, people tuned in to watch Michael Cohen testify in front of Congress about his time working with his former client, President Donald Trump. During the testimony, Republicans and Democrats both questioned Cohen's relationship with Trump, and his experience working with him over the years. The anticipated event kicked off at 10 a.m. ET on Feb. 27, and it was hours of endless questions, accusations, and lots of shade-throwing.

Truth be told, the list of details Cohen disclosed is too long to note, but there were a few moments that really struck a chord. So, if you're interested in political drama but would rather opt for the Cliffs Notes version, I've compiled a short list of some of the biggest takeaways from Cohen's testimony. So everyone, take a seat, sit back, relax, and enjoy the show.

When asked about 2016 negotiations to build a Trump Tower in Moscow, Russia, during the presidential election. Cohen alleged that Trump did not explicitly instruct him to lie about the deal — but it was understood that he would. "That's not how he operates," he said. He did claim that Trump expected him to lie about the business negotiations concerning the project. "At the same time I was actively negotiating in Russia for him, he would look me in the eye and tell me there's no business in Russia and then go out and lie to the American people," he claimed.

Cohen claimed that Trump's instructions were never explicit. "He speaks in a code, and I understand the code," Cohen said. Elite Daily reached out to the White House for comment but did not hear back by the time of publication.

Prior to Cohen's testimony on Feb. 27, Cohen pleaded guilty to lying to Congress about the project's negotiations, claiming in his plea filing that the attempts to secure a deal went on well after Trump was the presumptive nominee for president, indicating that — while the deal was not illegal — Trump may have had financial interest in Russia while a candidate. These real-estate plans may end up being a key part of FBI Special Counsel Robert Mueller's investigation into whether the Trump campaign actively colluded with Russian operatives during the campaign.

So, even though Cohen confirmed that Trump didn't explicitly instruct him to lie, the implications could be huge.

Cohen Brought The Receipts From The Stormy Daniels Payment

Perhaps one of the most shocking moments from Cohen's testimony was when the former attorney brought the receipts, literally. Cohen presented two checks he claims that Trump gave him to reimburse him for payments he made to adult film actress Stephanie Clifford, better known as Stormy Daniels, to buy her silence about an alleged 2006 affair with Trump just weeks before the end of the 2016 presidential election. Trump has denied both having the alleged affair with Daniels and knowing about the payment in advance, but admitted to reimbursing Cohen for his payment to her. Cohen claims that Trump instructed him to pay off Daniels, which could put the president in violation of campaign finance law. The White House did not reply to Elite Daily's request for additional comment on the documents or the subject.

"[Trump] asked me to pay off an adult film star with whom he had an affair, and to lie to his wife about it, which I did," Cohen claimed in his opening statement.

In this case, a check (or two) is worth a thousand words.

The president has no shortage of legal trouble as it is, but Cohen pulled back the curtain on yet another one. When asked by Rep. Raja Krishnamoorthi (D-Illinois) if he knew of any other wrongdoing or "illegal acts" by the president, Cohen answered with an unequivocal "yes." However, he claimed he couldn't discuss anything, as the matter was part of a Southern District of New York investigation.

"Unfortunately this topic is actually something that’s being investigated right now by the Southern District of New York, and I’ve been asked by them not to discuss and not to talk about these issues," he said. Hmm. He did not offer any other details, including whether the president himself was under investigation, and neither the White House nor the office of the Southern District of New York immediately returned Elite Daily's request for comment on the subject. The office of Special Counsel Robert Mueller declined to comment to Elite Daily.

Either way, my curiosity is piqued.

Who Knew About The 2016 Trump Tower Meeting

Remember the big bombshell of summer 2017? That's when we found out that in 2016, the president's son Donald Trump Jr. met with Russian lawyer Natalia Veselnitskaya, which Trump Jr. later confirmed was to obtain damaging information on then-Democratic opponent Hillary Clinton. While Trump Jr. confirmed the meeting and its purpose, the elder Trump has consistently denied knowing of it in advance. However, while speaking to Congress on Feb. 27, Cohen claimed that he witnessed Don Jr. apparently inform his father of the meeting. The White House did not immediately respond to Elite Daily's request for comment on Cohen's statement or Trump's knowledge of the meeting.

Cohen claimed that during a meeting that summer, he saw and heard Trump Jr. whisper to his father. "The meeting is all set," Don Jr. allegedly whispered to Trump.

Even though Cohen was never told explicitly what that "meeting" pertained to, the former attorney concluded that it was in relation to the 2016 Trump Tower meeting.

Per Cohen, the president likes to boost his own ego by inflating his worth, making generous assumptions about the value of real estate property or other assets in order to be included in "World's Richest" lists, and then deflate them again in order to avoid taxes. The White House did not immediately respond to Elite Daily's request for comment on the subject.

"Mr. Trump inflated his total assets when it served his purposes, such as trying to be listed among the wealthiest people in Forbes, and deflated his assets to reduce his real estate taxes," Cohen claimed.

Besides being kind of cringeworthy, it could come back to bite him. In her questioning of Cohen, Rep. Alexandria Ocasio-Cortez (D-New York) asked some very pointed questions about whether Trump had ever passed off those fudged numbers to insurance companies, and if so, where Congress could find proof.

Trump Might Have Known About The WikiLeaks Email Dump

Another thing to add to the list of what Trump may have known? Cohen claims the president was also in the loop about the trove of hacked Democratic emails that WikiLeaks released ahead of the 2016 presidential election. The White House did not immediately respond to Elite Daily's request for comment on the claim.

Cohen claims that he was present for a July 2016 phone call that Trump took from his friend and associate, Roger Stone, in which Stone allegedly told Trump that the emails were about to drop. "Mr. Stone told Mr. Trump that he had just gotten off the phone with Julian Assange and that Mr. Assange told Mr. Stone that, within a couple of days, there would be a massive dump of emails that would damage Hillary Clinton’s campaign," Cohen claimed. "Mr. Trump responded by stating to the effect of 'wouldn’t that be great.'"

Elite Daily reached out to the White House and representatives of Stone for comment, but did not hear back. Stone, however, told ABC News on Feb. 27 that "Mr. Cohen['s] statement is untrue." WikiLeaks also denied the claims in a tweet.

And of course, what everyone really wants to know — what, if anything, did Cohen know about collusion? Sadly, he couldn't give us anything really major. He said that while he had "suspicions," he couldn't testify to anything concrete. He said,

Questions have been raised about whether I know of direct evidence that Mr. Trump or his campaign colluded with Russia. I do not. I want to be clear. But, I have my suspicions.

In a statement, White House Press Secretary Sarah Huckabee Sanders said that it was "pathetic to see [Cohen] given yet another opportunity to spread his lies.”

Mueller's investigation into whether the Trump campaign colluded with Russian operatives during the 2016 presidential election has been going on for nearly two years, since Mueller was appointed in May 2017. So, it's no wonder that the subject got brought up during Cohen's testimony. While many people might have been waiting for Cohen to unleash some juicy details, unfortunately he wasn't much help.

Believe it or not, rumor has it that Mueller's investigation could be coming to a close very soon. Even though the special counsel's office declined to comment to Elite Daily on whether the investigation was wrapping up and whether a final report was in the works, CNN reported on Feb. 21 that U.S. Attorney General William Barr plans to announce that Mueller has completed his report. So, even if Cohen doesn't know much, we might in the near future.

So what's next for Cohen? Prison, for sure — he will report there for convictions on financial crimes and lying to Congress on May 6. But for Trump? That's clearly more complicated.

Editor's Note: This story was updated on Feb. 28 to include a statement from White House Press Secretary Sarah Huckabee Sanders.