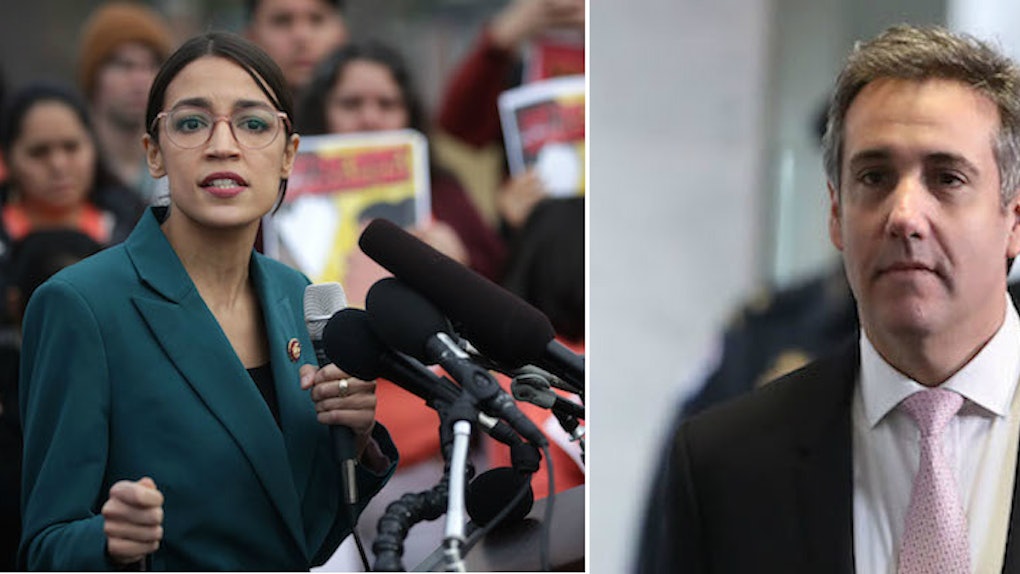 On Wednesday, Feb. 27, former personal fixer and attorney to the president Michael Cohen appeared on Capitol Hill to give a much-awaited public testimony about his knowledge of possible wrongdoing by Donald Trump. And his exchange with one rising-star Democratic lawmaker stood out. This video of Alexandria Ocasio-Cortez questioning Michael Cohen shows the freshman congresswoman knows what she's doing.

Over the course of his three-day congressional-testimony marathon, Cohen was expected to provide information to the committees regarding what he knows about possible evidence of wrongdoing by the president both before and while in office. Specifically, Cohen was said to give information about hush money payments made to two women in fall 2016, before the presidential elections, that were meant to silence them from coming forward with their stories of having alleged extra-marital affairs with Trump years earlier. Trump has admitted to compensating Cohen for making payoffs to the women but had repeatedly denied having affairs with them.

On Tuesday, reports were floating around that Cohen was also expected to give the Senate committee documents implicating the president in alleged criminal activity. And Cohen delivered, spilling all the tea and bringing the receipts. Cohen alleged that the president had spoken with him repeatedly about the Trump Tower Moscow deal while Trump was a candidate, and suggested that the president knew about the 2016 Trump Tower meeting in advance. The White House did not immediately respond to Elite Daily's requests for comment on the subjects, although the president has previously said that he did not know about the 2016 meeting and noted that the Moscow deal was not illegal, calling it "very legal and very cool." Embarassingly, Cohen also alleged that Trump had regularly inflated the estimation of his net worth for an ego boost, and then deflated it to avoid real estate taxes or liabilities. The White House did not immediately respond to Elite Daily's request for comment on that claim.

If it sounds like there was a lot of focus on Trump's business dealings, that's because there was. In fact, Ocasio-Cortez, who noted that Trump's own Trump Links at Ferry Point golf course in her home district of the Bronx had benefitted from taxpayer money, zeroed right in. She chose to ask Cohen all about the president's finances. "Did the president ever provide inflated assets to an insurance company?" she asked. Cohen answered yes, and in response to her follow-up questions, named who would be able to corroborate that and where the committee would be able to find documents. Check it:

If you think that sounds like Ocasio-Cortez is already looking for where the proverbial bodies are buried... well, you're not alone.

Understandably, people on Twitter had a lot to say about AOC and Cohen's exchange in the Wednesday hearing.

It's not the first time AOC has made waves during a hearing like this. The freshman congresswoman turned heads a few weeks ago when she made a debut of sorts on the committee's panel, using theoretical government officials to make an example of how special interests influence politicians.

So what's next for Cohen, Congress, and all of us? Sadly, the public won't get to see his Thursday testimony, but it's not the end of the world. Somehow, I doubt this will be the last we hear of this story.