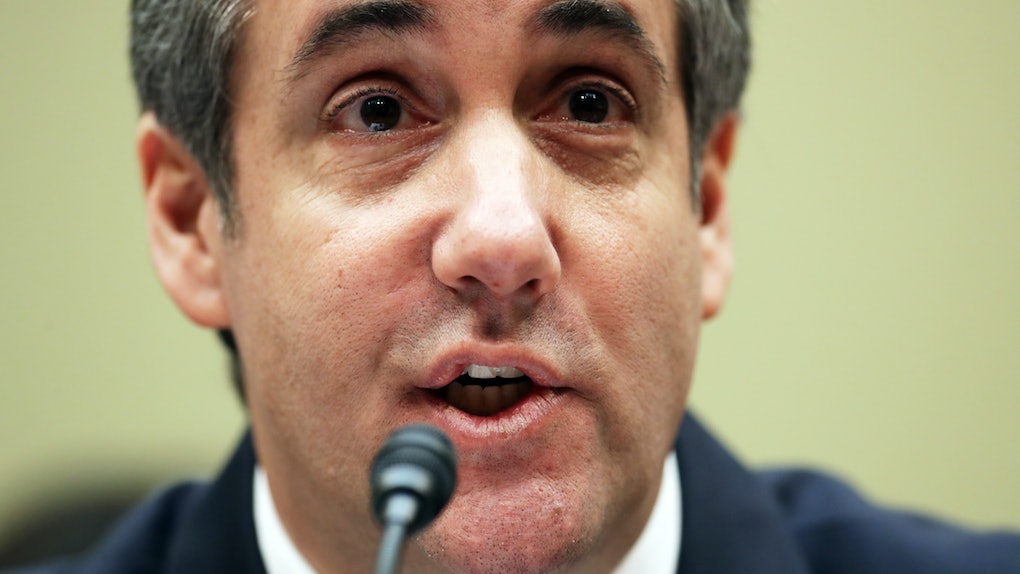 It seems like Michael Cohen laid everything out on the table about his onetime client in his Feb. 27 testimony before the House Oversight Committee. But according to the former lawyer, there are still some secrets left. Though he said he can't reveal those alleged illegal acts just yet, I, for one, can't stop thinking about Michael Cohen's claims of Trump's possible crimes. Elite Daily reached out to the White House for further comment on Cohen's claims, but did not hear back by the time of publication. To be clear, as of writing, Donald Trump has not been formally accused of or charged with any crimes.

The revelation came after Cohen was questioned about whether he knew about any other potential "wrongdoing" or illegal acts by President Donald Trump. After Rep. Raja Krishnamoorthi (D-Illinois) asked the former lawyer about the last time Cohen had been in contact with Trump or any of his associates, Cohen admitted that it was some time within the two months after FBI agents raided his home in April 2018. But he couldn't offer any information in regards to what they discussed, telling the congressman that it was due to an investigation by New York prosecutors. Interesting.

"Unfortunately this topic is actually something that’s being investigated right now by the Southern District of New York, and I’ve been asked by them not to discuss and not to talk about these issues," Cohen said. He did not say what specifically was under investigation, or even if it involved the president, and the Southern District of New York did not immediately return Elite Daily's request for comment on the subject. The office of Special Counsel Robert Mueller declined to comment to Elite Daily.

"Is there any other wrongdoing or illegal act that you are aware of regarding Donald Trump that we haven't yet discussed today?" Krishnamoorthi asked.

"Yes," Cohen replied, adding that he couldn't elaborate as the details might be part of the aforementioned investigation. The White House did not reply to Elite Daily's request for comment.

OK, so we might not know what those alleged crimes are just yet, but Cohen at least opened up about one thing. During his congressional appearance, Cohen described Trump's involvement in a hush money scandal, involving women who claimed they had affairs with the president. Trump has denied all claims of affairs. Cohen showed members of Congress a check from the president, which he said was a reimbursement for money Cohen paid to one of Trump's alleged mistresses in an effort to prevent damage to the 2016 election. (Trump has admitted to reimbursing Cohen for the payment.) “The president of the United States thus wrote a personal check for the payment of hush money as part of a criminal scheme to violate campaign finance laws," Cohen claimed in his testimony, per The Washington Post. However, it's unclear what the outcome of that will be.

I mean, he really laid it on thick, right? It's hard to imagine what else he might be holding on to, but judging from this latest drama, it seems like it could be something big. We'll see.