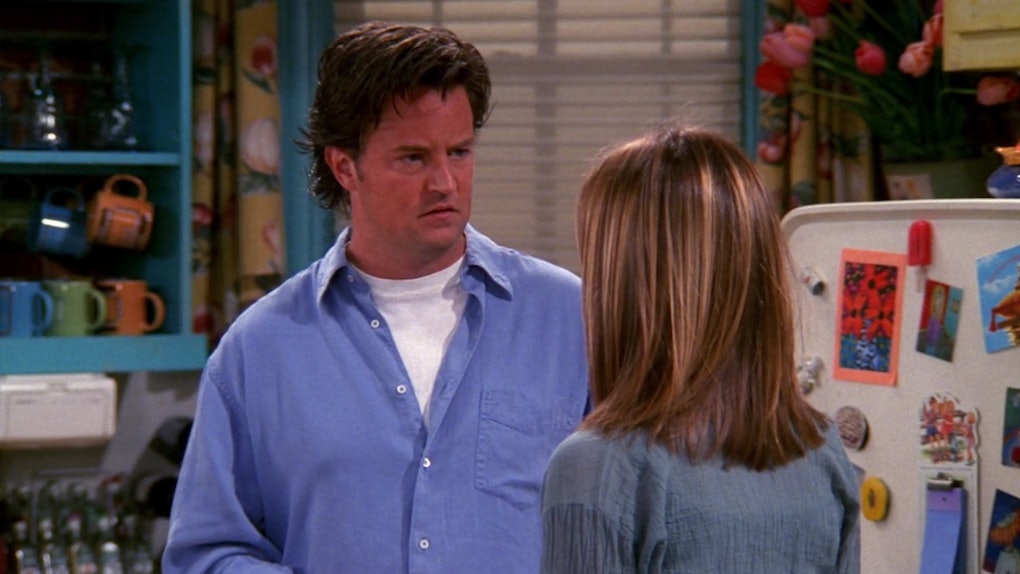 The 7 Best Moments From 'Friends' That Were So Sarcastic

Have you laughed out loud yet this week? If you haven't then you're in some serious need of sarcasm, and your favorite sitcom friend crew. Television truly has a way of making every case of the Mondays a bit better. It doesn't even need to necessarily be the first day of a long week for our go-to shows to know exactly what to say. We watch the same reruns over and over again, but we just can't help it because they never really get old. Some of the best moments from Friends, in particular, are so sarcastic that they have us laughing a little harder even when we know every word in the episode.

Leave it to Chandler to always come up with the best lines in any awkward situation, and Phoebe to say what's really on our minds. There's Joey, who is seemingly the only one who understands that one pizza is just not enough. And, of course, you can't forget Ross, who is all of us when we're channeling our hopeless romantic identities.

We love the entire cast, and we could never pick just one to appreciate the most. One day we'll inevitably move into our own place right near Central Perk, and grab an extra cup of coffee on the couch with our crew before facing the day. On those stressful Monday mornings and the like, that's all we really need — aside from these seven sarcastic scenes from Friends that'll always be there for us, too.

1. The One With The Routine

Sibling goals, am I right? This scene is honestly legendary for any Friends fan, and one that we couldn't help but laugh a little more with every time. Ross and Monica created "The Routine" when they were kids, and it's since won an honorable mention award at a dance competition. But, when they get the chance to bring it to the biggest stage of the Millennium, it's time to break out the cameras and start filming for the blooper reel.

What they don't know is how this dance routine is really one of the most embarrassing moments on the show, that has us all cringing a bit from our couch, too. We can all relate to a time when we were being particularly weird, and just didn't know it until years later when we were looking back on our awkward phase. Thank goodness this dance routine comes with a side of sarcasm.

2. The One Where Mark Is A Genius

Were Ross and Rachel on a break? *Dedicates some time for a huge debate and discussion.* We'll never really have it figured out, but we can all agree that Mark was most definitely a genius. This scene is one of the most underrated sarcastic ones (in my personal opinion) from the earlier seasons of the show.

To sum it up without too many spoilers, Ross and the guys of the gang are talking about Rachel's work relationship with Mark who landed her a job at Bloomingdale's. Ross is being all too jealous and sending Rachel singing lady bugs and the like at work in something that can only be described as calling "dibs." And Mark takes notice.

In a funny moment sitting in Central Perk, Joey comes up with an elaborate story about the future where Rachel and Ross aren't a thing anymore, and Mark is in the picture. It's all so sarcastic, and surely gets us laughing.

Ross had a hot date with the sun in this oh-so sarcastic scene (Pun highly intended, by the way.) After seeing Monica sport her summertime skin, Ross wanted to try out the fake tan life for himself — but, messes up the process and ends up looking quite toasty on only one side. Chandler, being the king of sarcastic humor, takes it as an opportunity to make fun of his best friend and the rest of the gang chimes in a bit, too.

Full disclosure: I've never gotten a fake tan. But, after watching this episode a million times over, I don't think I ever will just out of fear that I'd mess it up like this. I mean, counting can be really hard, right Ross?

4. The One Where Chandler Doesn't Run Into Beyoncé

Oh my god. Don't we all wish we could casually run into Beyoncé? Especially when we have the choice between the queen bee and Janice, I think the decision is quite clear. Chandler has a lot of one-liners throughout the show, but this one is possibly the best. Mostly because, it comes so casually and continues to be really relevant.

In the final seasons, things start to happen really quick as the real world seemingly gets so much more "real" for our favorite friend crew. We're sitting at home watching and saying "same" every five minutes, and occasionally crying over what it might mean if Rachel gets on the plane. But, nothing spooked our emotions more than hearing Janice's voice one last time from the screen. The whole cast of Friends has us crazy in love, except for this one character. Chandler's sarcasm, once again, to the rescue.

5. The One With The Whack Playstation

We could all use a Joey in our friend crew. For one, there would always be pizza in the picture if he was around — or at least some sandwiches. This scene is one that my roommates and I will continuously quote in all the real world years to come. Truth is, growing up is hard and especially when your 20-somethings are starting to come to a close, you don't quite want to accept your age.

Joey, in preparation for an audition, puts on his best impression of a 19-year-old. It takes everything in Chandler to not tell him he looks ridiculous, but then PlayStations and New York Knicks jerseys come into the mix, and all bets are off. On a scale of one to 10, Joey will always be a 19 in our hearts — and so will Chandler's always on-point sarcasm.

6. The One With The New Year's Resolutions

New Year's resolutions are tough, and by now you might have given yours up. I hope you make new ones, or maybe place some bets like these ones with your friend crew while you still can. The year isn't over yet, and maybe you'll win some money!

In this sarcastic scene, the gang decides that each one of them should quit one of their bad habits or learn something new. They tell Chandler that there's no way he can't make fun of his friends for any length of time, and call it less possible than Phoebe's goal to fly a plane. The entire episode, Chandler holds in his comments — which is honestly quite impressive considering Ross's leather pants that make an appearance. But, he bursts right at the end in a real moment of relief that had us all laughing and saying, "same."

7. The One With Ross's Sarcastic Story

We really underestimated Ross and his sarcastic stories. Throughout the entire show, it's Chandler that's known as the funny one. (And I won't disagree.) But, this scene when Ross and Rachel accidentally lock themselves out of the apartment really needs to take some much-needed cake.

For first time mother, Rachel, this whole episode is a nightmare. She's stressing beyond belief about leaving Emma behind for Phoebe's birthday dinner. And so, losing the keys to the apartment doesn't quite help. In a brilliantly sarcastic moment, Ross comes up with an elaborate story about what could really be happening on the other side of the door, in hopes that it'll put things in perspective. But, just picturing it all going down has us laughing a little harder.

Thank goodness for Friends and all its sarcastic moments for making that case of the Mondays so much better. We all have at least one sarcastic friend in our own crew. But one day, we hope we'll be there for this cast, too.