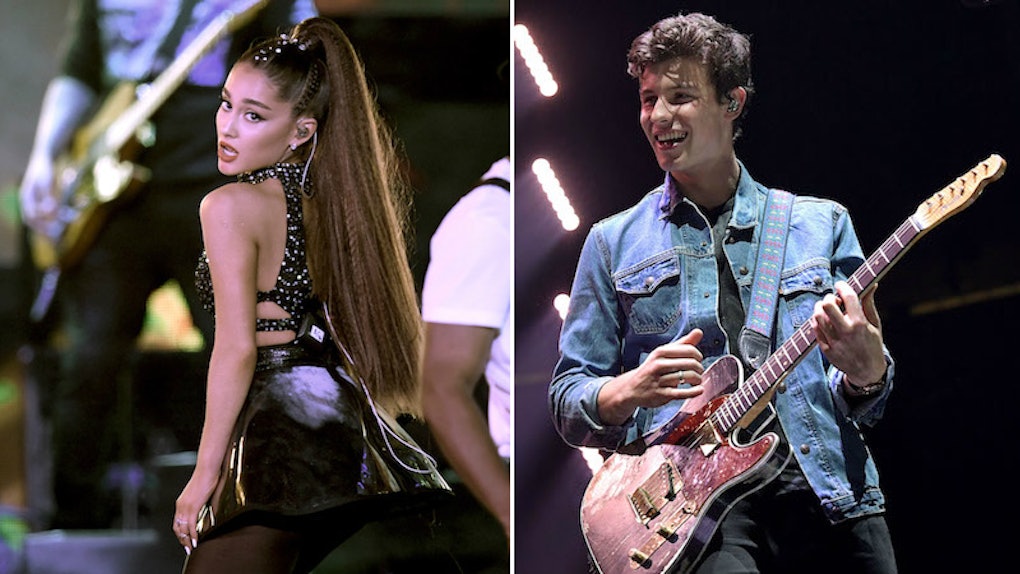 The 2018 MTV VMAs Performances Include Ariana Grande & Shawn Mendes, So You Better Tune In

Hold on to your music butts because the 2018 MTV VMA's performances are going to be BOMB. The epic night of dancing, celebrities, awards, and music is coming to a television near you on Monday, August 20, and it's bringing loads of your favorite artists with it. It was just announced that performance artists include my main girl Ariana Grande, my main-ish boy Shawn Mendes, plus Logic and Ryan Tedder and their single "One Day," which I just heard for the first time but I am INTO it.

UPDATE: Nicki Minaj will be making a surprise appearance during the VMAs with a remote performance. Details are scarce at the moment, but she'll reportedly be taking the stage at an "iconic location in New York." It'll be her very first live performance after the release of her new album Queen. Additionally, Travis Scott will be performing at the VMAs as well.

EARLIER: Fans will undoubtedly be looking forward to Grande's performance with her new single "God Is A Woman" rocking the charts. Between her latest album, Sweetener, and her new engagement to comedian Pete Davidson, this girl has been on fire. She made a slow return to the public eye after the horrific Manchester attack at her concert in the U.K. and fans are so excited to welcome her back into the media and onto their playlists. I can only imagine what kind of response she'll get on the VMA stage!

As for Mendes, homie is nothing if not delightful. Fans were momentarily worried his sweet-baby-boy feelings might be hurt after his rumored ex-girlfriend Hailey Baldwin jumped into an engagement with Justin Bieber just months after appearing at the Met Gala with Mendes. However, when Mendes was asked about Bieber and Baldwin's fast and furious romance by the Canadian program ETALK, he responded, "I love them both. They’re both really awesome people." Bless his heart (and perfect jawline).

Mendes, Grande, and Logic plus Ryan Tedder are only the first three confirmed performers of the night, but there will certainly be many more announced leading up to the main event. Fans can also look forward to some intense award announcements because the competition this year is fierce.

Check out some of the most talked-about award categories and nominees in the list below, and be sure to tune in on August 20, 9 p.m. EST to catch all the action!

VIDEO OF THE YEAR

ARTIST OF THE YEAR

SONG OF THE YEAR

The Chainsmokers – “Everybody Hates Me” – Disruptor Records/Columbia Records

Foo Fighters – “The Sky Is A Neighborhood” – RCA Records

VIDEO WITH A MESSAGE

More like this
This Theory About The Songs In BTS' "Butter" Concept Videos Will Blow ARMYs' Minds
By Michele Mendez
What Is Coco Jones From 'Let It Shine' Up To In 2021? She's Doing It All
By Sydney N. Sweeney
Olivia Rodrigo's "Drivers License" & "Good 4 U" 'SNL' Videos Prove She's A Star
By Abby Monteil
Stay up to date