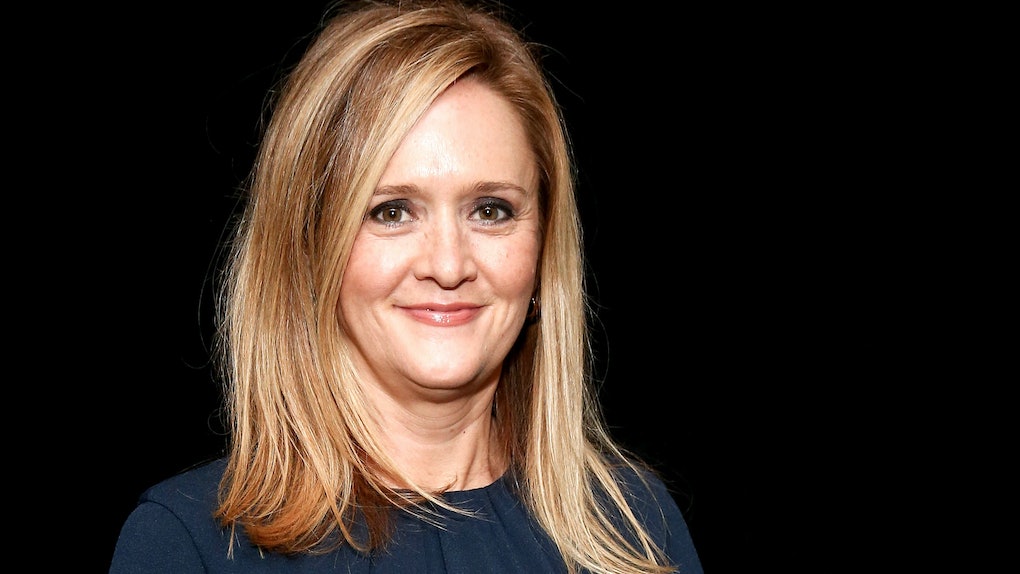 This year's White House Correspondents' Dinner was definitely one for the books. Even though the president and first lady didn't attend, the White House shindig always attracts the political elite from all over, and of course comedians always have a ton to say — particularly this year, when how much "meanness" is allowed at a roast has become such a point of concern. Samantha Bee's tweet about the 2018 White House Correspondents' Dinner is calling the doubters out.

In the days since the April 28 dinner, there's been a lot of discussion about whether host Michelle Wolf's jokes were appropriate for the event. Wolf went hard on the Trump administration, calling out the president and members of the administration present for their false statements, allegations of collusion between the Trump presidential campaign and Russia, Trump's refusal to denounce white supremacists, and troubling record regarding LGBTQ+ issues. In short, she had a lot of material to work with.

But Wolf quickly took a lot of heat for her jokes, with some saying her joke about Sarah Huckabee Sanders was out of line and mocked Sanders' appearance, while the White House Correspondents' Association (WHCA) distanced itself from her jokes in a statement.

Enter Samantha Bee. The Full Frontal host and comedian hasn't been shy about sharing her thoughts on the current Trump administration. From calling out political figures to openly slamming Republican commentator Sean Hannity, this television host doesn't play around when it comes to speaking her feelings. So she brought the receipts — and Trump's own words — to offer an example of jokes that were "out of line."

A reminder that Trump has also "joked" about staying in power indefinitely, his vice president wanting to execute LGBTQ+ people, and physically attacking his political opponents — oh, and the press — among other things. But apparently, making a joke that referenced Sarah Huckabee Sanders' eye makeup is where the line is drawn.

During last year's White House Correspondents' Dinner in April 2017, which Trump did not attend, Samantha Bee held a very special event at the same time in honor of the political party, which she originally titled "Not The White House Correspondents' Dinner." Throughout the evening, the comedian roasted the president with quick jabs and witty one-liners.

"We are living in a Golden Age of journalism," Samantha Bee said at the event. "Unfortunately, that's partly due to a golden president who's rumored to enjoy golden showers."

It was an iconic night, and even though we sadly didn't get to enjoy it a second time, her tweet still speaks volumes.

Keeping up with Trump tradition, the WHCA announced on April 6 that the president wouldn't be attending the Correspondents' Dinner on April 28.

There's just something about Trump and "vital role of free press" that has me scratching my head. Trump has continuously called out publications for reporting so-called "fake news," so it's really not surprising in the slightest that he avoided the press soirée.

So Trump skipped out on the dinner, again. What was he doing instead? Well, the Trump campaign announced on April 17 that Trump would be holding a rally in Washington, Michigan the night of the White House Correspondents' Dinner, according to CNN. Michael Glassner, the Trump campaign's chief operating officer, confirmed this via a public release, but didn't shy away from adding some colorful language.

While the fake news media will be celebrating themselves with the denizens of Washington society in the swamp that evening, President Trump will be in a completely different Washington, celebrating our national economic revival with patriotic Americans.

Well, all right then.

Even though most of us weren't able to attend the White House Correspondents' Dinner, we were still able to take part by watching it on screen. If you missed it, don't worry. Thanks to the glory of the internet you can still relive the experience by watching the video.

The White House Correspondents' Dinner is truly a night that gives comedians across the globe a lot of material to work with, especially in this current Trump administration. So sit back and enjoy the tea — it's still good at the second cup.