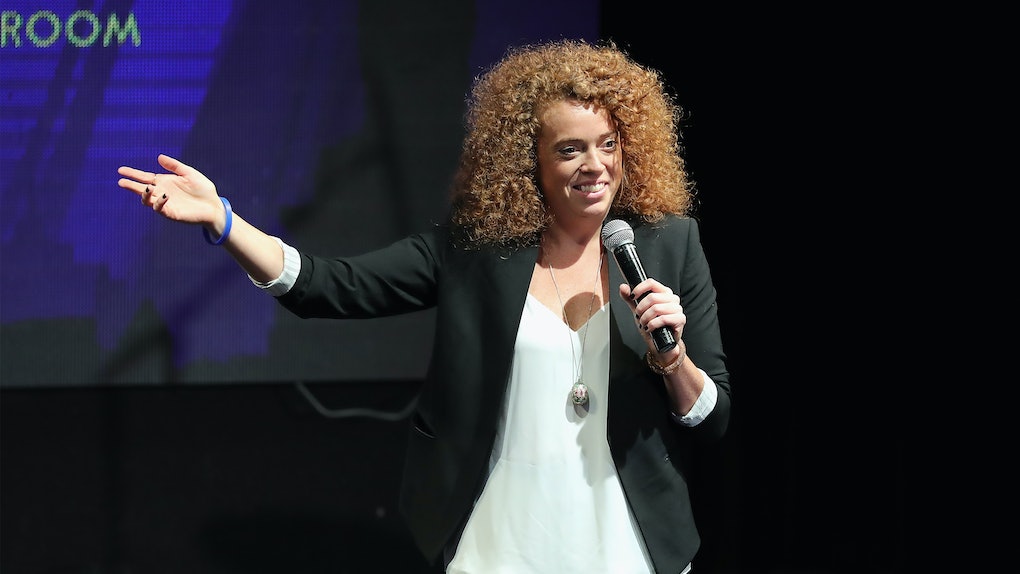 The annual White House Correspondents' Dinner is the one time per year when reporters and journalists that cover the president, as well as prominent Washington politicians, come together and let loose on national television. Considering the relatively grim news cycle as of late, this dinner provides a very much needed comic relief for everyone, and the performance we got from Saturday night's master of ceremonies seriously hit it out of the park. The video of Michelle Wolf's White House Correspondents' Dinner speech was perfection, and I couldn't have asked for a better host.

Wolf took jabs at everyone tonight — from the president, to the press, and even former presidential nominee Hillary Clinton. She started off her speech by making fun of Congress when she said, "I'm here to make jokes, I'm not here to get anything accomplished. So members of Congress should feel right at home."

But really, the whole thing was great. Wolf's jokes landed well with the audience and this speech is a definite must watch. You can see it in all its glory here:

If you didn't know who Wolf was before, after Saturday night's speech I'm sure you'll want to know who she is now. The 32-year-old comedienne hails from Hershey, Pennsylvania and never truly intended to get into comedy. “I was a kinesiology major in college, which is exercise science,” Wolf told TheWrap in 2016. “Then, I was either going to get my PhD or go to medical school, but I was kind of burned out after school. My roommates had all gotten jobs on Wall Street, so they were like, ‘Come work with us on Wall Street! We’ll all live in New York for a couple of years.'”

After working on Wall Street for a couple of years, Wolf wound up taking an improv class that completely changed her world, according to The Village Voice. After that, she began taking comedy seriously and devoted everything she had to writing jokes and practicing her sets at clubs in the city. And all of her hard work paid off when she got her big break in 2013 when she landed a job as a joke writer on Late Night with Seth Meyers.

Since then, Wolf has accomplished so much and is a respected comedienne in her own right. In addition to this gig at the Correspondents' Dinner, Wold starred in her first HBO stand-up special — Nice Lady — in 2017. The special covered a wide variety of topics, including Hillary Clinton, bathroom politics, and the difficulties of being a woman this day and age. Wolf also landed her own half-hour weekly Netflix talk show, The Break, which will premiere on May 27.

That special, along with her work writing jokes for both Late Night as well as The Daily Show with Trevor Noah, is probably what got Wolf the honor of hosting tonight's dinner. The event is a star-studded one where seats are filled with celebrities and notable politicians alike, which likely means that Wolf will be more widely recognized after tonight. But one "celebrity" that's missing from the audience? President Donald Trump.

White House Correspondents’ Association President Margaret Talev made the announcement that Trump will not be present at the dinner, sending Press Secretary Sarah Huckabee Sanders in his place. This is the second year in a row that Trump has opted-out of the dinner — and Wolf was relieved that this would be the case. In an interview with Jimmy Kimmel, Wolf said, "The first thing I thought was like, 'Oh thank God I don't have to hear Trump eat,'" She went on to say, "You know he doesn't chew with his mouth closed. He's probably like a real smack-y eater and a mouth-breather at the same time."

But that didn't stop Wolf from taking a couple of jabs at the president, as everyone does during Saturday night's annual festivities. Wolf was the perfect host choice for the correspondents' dinner, and I'm definitely excited to see what this lady's got in store for her future in comedy.