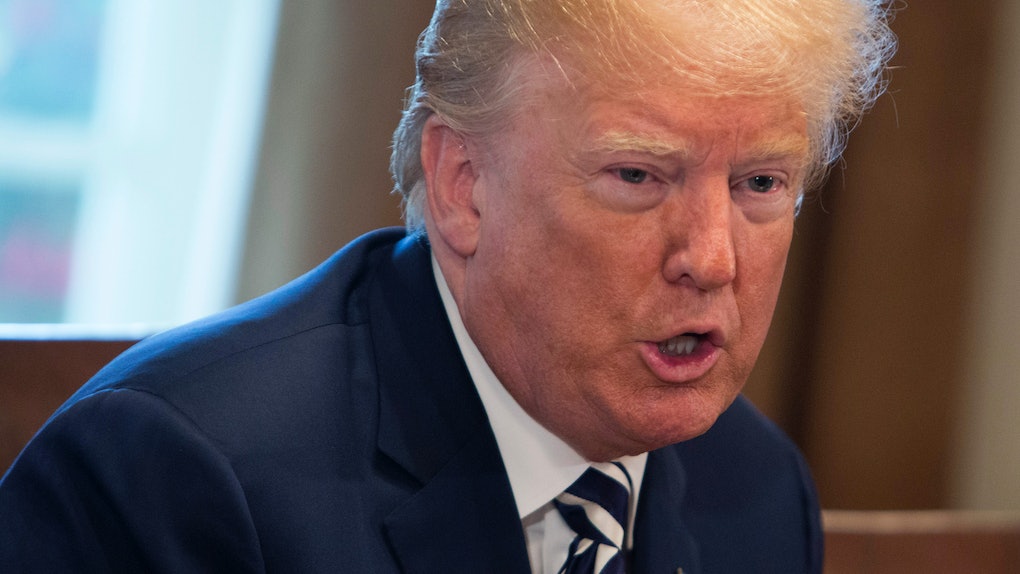 What Is Trump Doing Instead Of The 2018 White House Correspondents' Dinner? It's So Trump

President Donald Trump plans to miss out on all the fun again this year. The White House Correspondents' dinner (WHCD) is coming up on Saturday, April 28. Government officials and media elites will rub elbows over a fancy dinner and hilarious entertainment. But the president has RSVPed "not attending," for the second year in a row — so what is Donald Trump doing instead of the WHCD? Hint: it's not at all surprising, because he's done it before.

Trump will will find himself in a different Washington on April 28. The Trump campaign announced on Tuesday, April 17 that the president will be ditching the WHCD, and will instead host a rally in Washington, Michigan on the night of the dinner, according to CNN. This won't be the first time that Trump held a rally on the night of the WHCD. During last year's event Trump held a rally in Pennsylvania.

Michael Glassner, the Trump campaign's chief operating officer called out the so-called "fake news" media in a release, and said that instead of slumming it in the swap at the WHCD, Trump will be in Washington, MI celebrating the "national economic revival." He said,

While the fake news media will be celebrating themselves with the denizens of Washington society in the swamp that evening, President Trump will be in a completely different Washington, celebrating our national economic revival with patriotic Americans.

Trump had previously stated, on April 6, while appearing on WABC's Bernie & Sid in the Morning, that, "It's unlikely I will do the White House Correspondent's Dinner this year," according to a tweet sent out by the show.

The "unlikely" was short lived, though, because on that very same day the the president of the White House Correspondents' Association (WHCA), Margaret Talev shared a statement to Twitter confirming that Trump would not be in attendance at the dinner, but he will encourage members of his staff to attend. Talev wrote,

The White House has informed us that the president does not plan to participate in this year's dinner but that he will actively encourage members of the executive branch to attend and join us as we celebrate the First Amendment.

Talev went on to say that Press Secretary Sarah Huckabee Sanders will be representing the administraiton. She wrote,

In keeping with tradition, Press Secretary Sarah Sanders also will represent the administration at the head table. The April 28 dinner celebrates award-winning reporting, scholarship winners and the vital role of the First Amendment and the free press in American democracy.

What Talev's statement doesn't note is the reason Trump's skipping the event — namely, his long-running feud with the media, or as he so fondly calls them, the "Fake News Media." In his Bernie & Sid in the Morning appearance, Trump also added that "I sort of feel like the press so bad, it’s so fake, it’s so made up," and said, “I just think I want to get it straightened out with the press before I do it."

Also on April 6, after Talev confirmed Trump wouldn't be attending the WHCA, Trump sent out a tweet of his own blasting the "Fake News Media" and reminding us why Trump really isn't attending the black-tie event. Trump wrote,

Do you believe that the Fake News Media is pushing hard on a story that I am going to replace A.G. Jeff Sessions with EPA Chief Scott Pruitt, who is doing a great job but is TOTALLY under siege? Do people really believe this stuff? So much of the media is dishonest and corrupt!

Not that we needed a reminder, thanks to Trump's fondess for the term "Fake News." His rather raucous Twitter feed is mostly comprised of tweets calling out the media, and he even once announced on Twitter that he was going to hold his own "Fake News Awards" back in January, in which he was set to present awards to "most corrupt & biased of the Mainstream Media." So are we really all that shocked that Trump is flaking on the WHCD for a second year in a row?

Spoiler alert: no. But hey, that just means more dessert and more laughs to go around for everyone else. Your loss, Don.