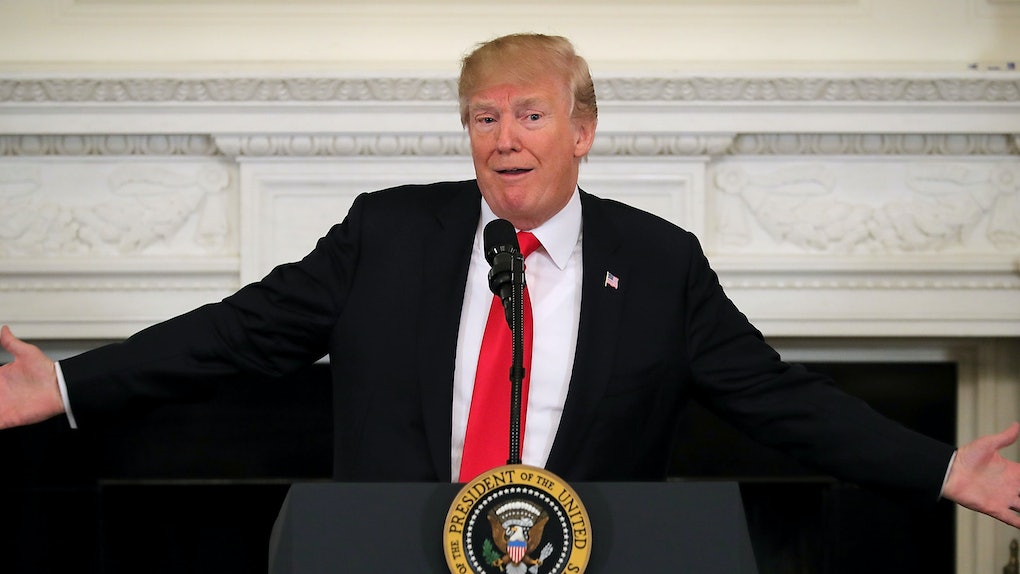 Donald Trump's Presidential Term Limits Joke Is So Out Of Line

When it comes to President Donald Trump, there is not much he can say to shock the public anymore. The president is someone who has grown fond of sharing his many thoughts from his Twitter account, but his latest reported comments came in a closed-door speech to Republican donors. Even with President Trump's seemingly accepted higher threshold than his predecessors when it comes to making shocking remarks, Donald Trump's presidential term limits joke went too far.

According to CNN, the reported comment was made during a fundraising lunch at President Trump's Mar-a-Lago estate in Florida on Saturday, March 3. In a recording of the speech obtained by CNN, the network reported that while talking about China's President Xi Jinping of China's ruling Communist Party, Trump reportedly applauded President Xi's recent move to remove China's two-term limit for presidents. President Trump reportedly told those in attendance at the private lunch, "He's now president for life. President for life. No, he's great. And look, he was able to do that. I think it's great."

President Trump followed up his praise of President Xi by reportedly saying (of abolishing presidential term limits), "Maybe we'll have to give that a shot some day." Elite Daily has reached out to the White House for comment but has not heard back at the time of publication.

The official word on whether term limits on China's presidency will actually go away will come after China's annual congressional meeting on March 5, according to Forbes. The proposal is expected to pass, and according to Reuters, the move is "prompting accusations ... that China is set to become another North Korea." Reuters also notes that according to Chinese news outlet The People's Daily, which is the official newspaper of the Communist Party in the country, the move did not mean "life-long terms."

CNN reported that tone of Trump's speech was upbeat and filled with plenty of jokes, so mentioning the abolishment of U.S. presidential term limits was likely an offhanded quip. Even so, to have a sitting U.S. president jokingly suggest that the United States should look into doing away with the current two-term limit on U.S. presidents is unsettling, to say the least.

The shocking comment is amplified by the fact that President Trump has made his mark as someone who doesn't like to necessarily stick with tradition. You'll recall that some of President Trump's diplomatic actions tend to look quite nontraditional, like his reference of Kim Jong-un as "Little Rocket Man" on Twitter.

Term limits, though, are not simply a tradition of the U.S. presidency — they are the law.

Term limits are literally enshrined in the U.S. Constitution. The 22nd Amendment was passed on March 21, 1947, and it states:

This idea of a two-term limit began with President George Washington, who, according to the Constitution Center, decided to retire in 1797 after two terms on his own accord. Washington's example proved to be enough for his successors to follow suit, though there was no requirement to do so.

It was the onset of World War II that required a departure from Washington's set convention. President Franklin D. Roosevelt secured four presidential terms (that spanned from 1933-1945) during the war, and there was a national worry that this break from the two-term limit could not be undone without an official law — and so the 22nd Amendment was passed in 1947.

The U.S. democracy now functions with this constitutional law for presidential term limits. Former President Barack Obama spoke to the general idea and importance of presidential term limits in 2015 when he spoke to African Leaders at the headquarters of the African Union in Addis Ababa. Obama said that term limits for presidents are essential to democracy and that "democratic progress" is at risk "when leaders refuse to step aside when their terms end," according to the U.S. Embassy in Equatorial Guinea.

So, with the success of a democracy partially dependent on presidential term limits, it's not reassuring for Americans to hear the sitting U.S. president joke about their removal.