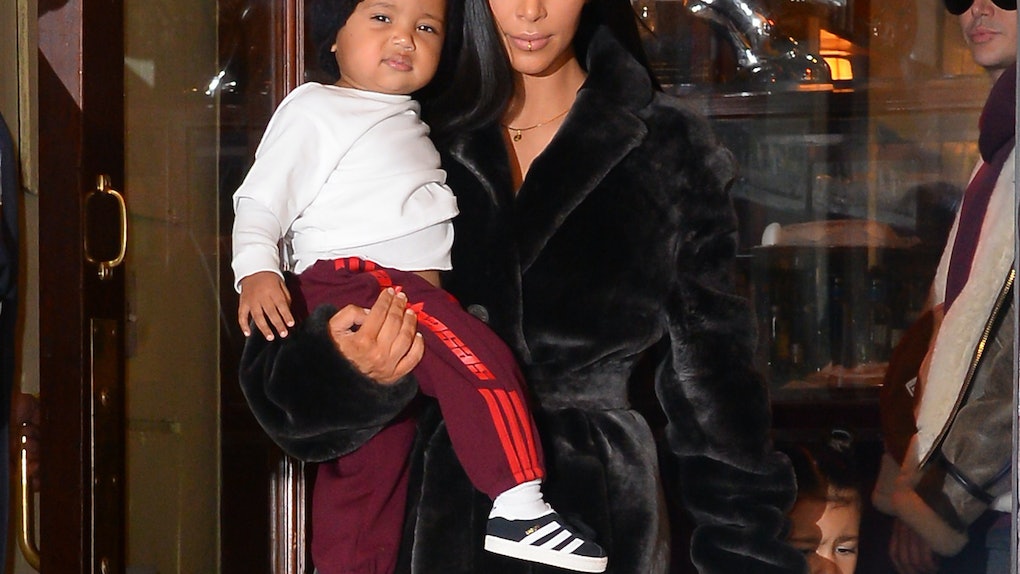 Saint West Was Reportedly Hospitalized With Pneumonia & Fans Are So Worried

All seemed well at the Kardashian New Year's Eve party, so fans were shocked and worried to hear Saint West was hospitalized for pneumonia. According to TMZ, Saint was taken to a Los Angeles hospital on Thursday, Dec. 28, and reportedly stayed there overnight until Saturday, Dec. 30. He was then released and sent home. Fortunately, sources say he's doing well. Elite Daily reached out to Kim Kardashian's team for comment, but did not hear back by the time of publication.

Kim and Kanye also reportedly stayed by their 2-year-old's side during the duration of his hospitalization, taking turns on overnight duties. Luckily, by the time New Year's Eve rolled around, the family all seemed to be at home enjoying the holiday together. On Jan. 2, Kim posted a sweet message for her son on Instagram:

My precious baby boy is so strong! After spending three nights in the hospital & seeing my baby get multiple IV’s and hooked up to oxygen machines, our end of year was challenging. Pneumonia is so scary. I just want to thanks every nurse & doctor out there who works so hard around the clock. We are so grateful for you all! He’s home and all better. He’s so resilient I’m sure he will still say the ambulance ride was cool! My strong Saint

Fans are thankful to hear Saint is feeling better, particularly because he has a big surprise coming very soon. Kardashian and West's third baby will be arriving via surrogate any day now, and we can't imagine what the anticipation is like in that household. Followers were hoping the bundle of joy would arrive before Christmas, but if she's here, the public doesn't know it yet.

Kardashian posted a family Christmas photo including husband Kanye, daughter North, and baby Saint. In the image, Kardashian smolders in a mini lavender dress, and the rest of her family is cool as can be in all black. Very clearly, there is no third baby in sight. Kardashian captioned the pic, "Happy Holidays."

Fans have been anticipating the baby's arrival thanks to sources who claimed her due date is actually sooner than we all originally thought. An insider previously told US Weekly, "Kim’s surrogate is due before Christmas."

WELL, GUESS WHAT, INSIDER? CHRISTMAS CAME AND WENT AND I DID NOT GET ANOTHER KARDASHIAN-WEST BABY UNDER MY TREE.

The good news is another insider says Keeping Up With The Kardashians will "heavily document the pregnancies" in upcoming episodes, assuming this includes both sister Khloé Kardashian's first pregnancy and potentially Kylie Jenner's rumored pregnancy, too. Another source claimed,

[The show] will talk about the surrogate and new baby on KUWTK. They’re filming it around now but it won’t air until much later.

As of right now, we have official confirmation from both Kim and Khloé that they do indeed have babies on the way. After months and months of speculation, Khloé formally announced that she and her boyfriend Tristan Thompson are expecting their first kid together. In an awesome post on Instagram, Khloé wrote,

With Saint safely back at home, the world is settling in for a wonderful 2018 full of new Kardashian/Jenner babies. And, like, hopefully peace on Earth, too.