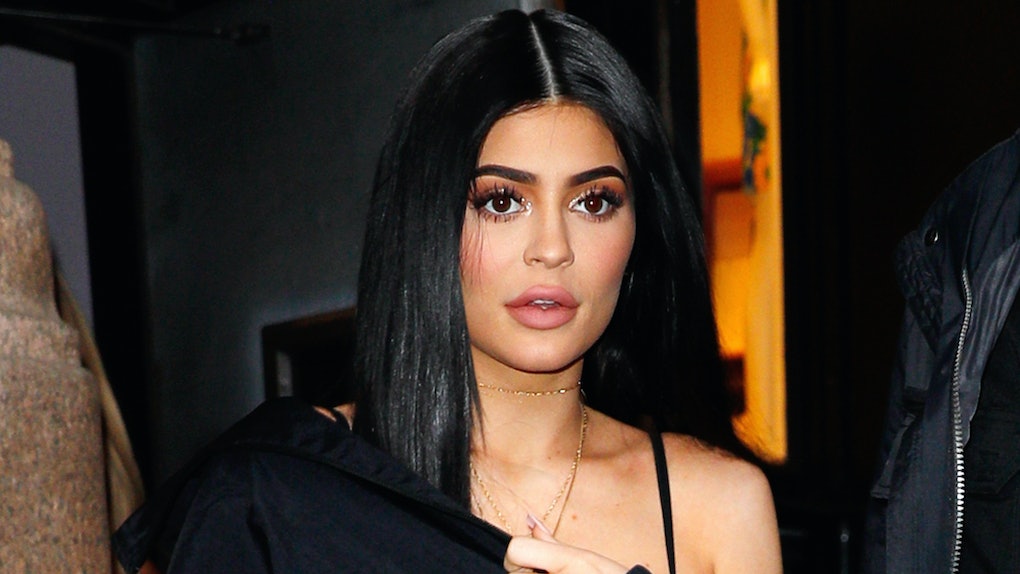 Did Kylie Jenner Give Birth? Fans Think She Has Based On This Theory

New year, new Kardashian pregnancy theory. Despite reports that Kylie Jenner isn't due until March, fans think she already had a baby and that's why she wasn't in the holiday card. So, did Kylie Jenner give birth? This theory was born (get it?) on Twitter, where all great celebrity conspiracies are created. Based on the theory, it's clear to see why fans think Kris Jenner's youngest daughter already had her reported baby with boyfriend Travis Scott.

The Christmas Eve photo from the Kardashian Christmas card is the inspiration behind this theory. Half of the women in the photo are looking off to the side and smiling, seemingly at a specific person. It could be a photographer trying to get the kids' attention. A previous fan theory says they're looking at pregnant Kylie Jenner. This new theory says they're not looking off at pregnant Jenner, rather new mom Jenner holding her baby. Kylie Jenner hasn't confirmed any of these pregnancy rumors and obviously hasn't confirmed or denied any of these theories as a result. So, just like we've been saying ever since we first heard reports of Jenner's reported pregnancy, this is all speculation. It's honestly one of my favorite pastimes now. But we can't know for sure until Jenner confirms or denies the rumors herself.

This is the Christmas Eve photo from the Kardashian Christmas card.

And this is what fans are saying about it.

While it's fun to think about the possibility that Jenner already gave birth to her reported baby, I have my doubts. Since the family has been so silent about these rumors and Jenner has basically been MIA for months, it makes sense that the internet would come up with theories like this to fill the silence. But the fact of the matter is, if Jenner really is pregnant, all of the sources saying she is have said she's due around March, and that by the time the news was revealed, she was already about four months pregnant. (The same thing was reported about Khloé Kardashian, who confirmed her pregnancy in December.) Based on all of this, I really don't think Jenner has given birth. But I do believe we won't know she has until after the fact, as sources have said that is reportedly her plan. So, while this waiting game is feeling hella drawn out, it's Jenner's choice whether to confirm or deny these rumors before she gives birth.

You can see the photo in question here. The photo is from Jordyn Woods' birthday party back in September. In the photo, you can definitely see what seems to be a baby bump underneath the baggy sweatshirt Jenner is wearing. She also seems to be resting her arm on her belly. Fans are taking this as confirmation of her reported pregnancy, but Jenner is still silent/staying out of the public eye.

While it's not confirmed whether or not Kim Kardashian's surrogate has given birth to her and Kanye's third child, Khloé Kardashian has confirmed her pregnancy and has been posting adorable photos of her bump since.