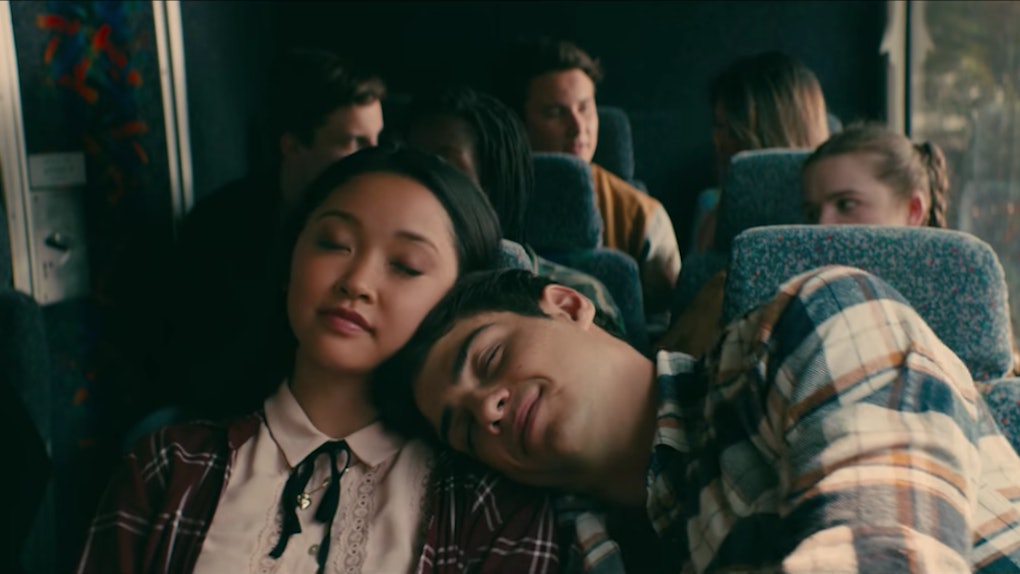 Unless you’ve somehow managed to stay off the internet for the past two weeks, you’re probably no stranger to the absolute delight that is Netflix’s To All The Boys I’ve Loved Before. There’s a reason we can’t stop talking about it — it’s just about the sweetest rom-com to hit our TV screens since... probably ever. One of the things that makes it so addicting and delicious to watch is the undoubtable chemistry between actors Noah Centineo and Lana Condor. They did so well that they made their characters Peter Kavinsky and Lara Jean Covey’s body language seem so authentic, you’d think they’re a real-life couple!

But alas, that is not so. IRL, Condor dates actor Anthony de la Torre, who played a young Jack Sparrow on Pirates Of The Caribbean: Dead Men Tell No Tales. Centineo is reportedly very much on the market, but told E!’s Daily Pop that he probably wouldn’t date a fan, saying, “I don’t close any doors totally, but probably not, because then it’s like more of an infatuation with like, a position more than like, the person. It can overshadow that, which is difficult, I would think.” *Cue massive sobs*.

While we probably can’t expect to match with Centineo on Tinder, the good news is we can watch TATBILB as many times as we want, and continue to fawn over how sweet of a couple Peter and Lara Jean make. So sweet, that I asked body language expert Blanca Cobb to analyze their body language in the movie and gauge the chemistry between them. Turns out, it was just as obvious to Cobb as it was to you, me, and every other individual who’s laid eyes on Peter Kavinsky and Lara Jean Song Covey: These two are tight AF. Here’s what Cobb had to say.

Peter was totally into Lara Jean, even before their contract.

If you recall (you def recall), this scene happens after Lara Jean kisses Peter to make Josh Sanderson, her sister's ex, think she's not actually in love with him. Peter confronts Lara Jean to try and understand why she wrote the letters and what she's going to do next. Remember when he tells her he's "flattered," but that he and Genevieve had just broken up, so "it's never going to happen"? Cobb says based on their body language, Peter was already into Lara Jean before they even started their "fake" relationship.

"When you’re interested in somebody, your body will actually turn toward that person," Cobb tells Elite Daily. "You give them your full attention, so from head to feet — and you can tell, just looking at this picture, that he’s completely facing her from head to toe." Cobb can also tell that Lara Jean is feeling "just upset, a little uneasy, a little nervous," because of the way she's touching the cup in front of her. Cobb says that touching something is a sure-fire way to tell that someone's uncomfortable. But as for Peter, "You can tell that no matter what they’re talking about, he’s definitely engaged with her." Swoon.

They were very comfortable together.

This here was Peter and Lara Jean's first fake-couple kiss. (You know, after the one on the track and right before they negotiated the terms of their contract.) Cobb says that even though they had just started their fake relationship, they were already attracted to each other because when you really like someone, you'll try to get your bodies as close together as possible, no matter the setting.

"So even if you see colleagues, if you’re working in a business office, people will tend to get closer together," Cobb says. "What I like about this kiss here is that their bodies are physically closer together. There’s some distance, but not a lot of distance. And so that’s where you get the indication of whether people have good chemistry or not."

Cobb says Lara Jean's hands in this photo show an already-established comfort between them, as "the more comfortable you are with someone, the more you're going to spread your fingers out. You're going to take up more space on someone's body." It truly seems like Centineo and Condor were very comfortable acting together, as their characters' body language goes beyond what was happening in the actual movie, and is more indicative of a solid, comfortable bond.

They were engaged in deep conversation.

This is, arguably, the scene where Peter and Lara Jean start to develop real feelings toward each other. They open up about more personal topics and really start to get to know each other. Cobb says that we can, again, observe their bodies angling toward each other, "a little bit, slightly, so not completely, but it gives the impression, because you're opening up to that person." Given their body language and their eye contact here, Cobb says it shows they're saying, "OK, I'm gelling with you, I'm liking this conversation, I'm interested in what you have to say." Cute!

Even when they fight, they're still into each other.

Peter and Lara Jean's first big fight happens right before the ski trip, when Lara Jean wants to call off their agreement because she's really starting to fall for Peter. Here, he's trying to convince her to keep up the act a little longer. But don't let Lara Jean's crossed arms fool you. Even though they're fighting, they still care about each other.

"Typically people always love to jump the gun and say when you see crossed arms it automatically means someone’s closed off or tense," Cobb says. "Not necessarily, but you always have to take context. So my opinion is that they’re having some type of conversation that’s generating a little bit of stress." Cobb also points to the rigidity of Peter's fingers as a sign that he's feeling stressed AF. "For me hands are like an emotional barometer, and those hands are a little bit tight."

So yes, there's obvious tension, but they still care about each other deeply, and we can tell by the way they're still looking square at each other. "So what happens when people get in arguments, and there’s a disconnect, you will actually turn your body away from that person," Cobb says. "This happens in real couples. What I like about this is you can argue and still be connected to somebody. So emotionally even though there’s some tension, if you look at their bodies, they’re still angled, they’re facing each other and that’s a really good sign. So even though we see some stress in his fingers, he’s still having open body language. He’s not closed off." Cobb also calls this a "healthy argument," because "there’s no condescension in their faces. They’re looking at each other, they’re tense."

There's zero space between their bodies.

Ah, yes. Who could forget the infamous hot-tub makeout scene? Cobb says that these two are definitely feeling the love here, especially because, "When you’re attracted to somebody, and you want to make it look good — because we’re talking about acting, you have to feel it — you have to be in the moment. They’re getting physically close together, she has her hand on the back of his neck to bring him in further for the kiss, and it looks like you can't even get any air in between their faces."

Cobb describes Peter's face as "dreamy," and with good reason. He and Lara Jean just had a great night in the hot tub. What could go wrong?

Stans of the film will recall that this is right before their big blow-out fight, when Lara Jean finds out Peter went into Gen's room right after their makeout. Gen hasn't confronted her yet, so for now, the two of them are still on cloud nine. Cobb says, "he’s feeling pretty good, you can just tell with the smile. You wouldn’t anticipate a big smile with teeth when people are sleeping or pretend to be sleeping or relaxing. She has a serene look, he has his head completely on her shoulder. It’s great."

This is the part where I cried like a lil baby, because I thought all hope was lost between Peter Kavinsky and Lara Jean Covey. How do you bounce back from giving your ex-girlfriend your current fake-girlfriend's favorite scrunchie?? But even though Lara Jean hard-core dissed him in the school parking lot, Cobb says it looks like Peter really, really wants to make up.

"What I like about this, so he’s considerably taller, but see how he’s bending forward at the hip?" Cobb points out. "That gives the impression of, 'I want to talk to you, I’m interested.' It looks like another tense moment to me. He has some sensitivity here cause he’s bending at the waist so he’s trying to get closer. And again, they’re looking at each other face to face, they’re torso to torso."

Another interesting tidbit? Their hands are hidden. According to Cobb, in real life, "normally when you hide your hands, that's a sign of some tension, some stress, something you're hiding." Definitely lots of stress and tension here, folks.

They definitely got the happily ever after they wanted.

"What I like about this is he’s going in for the kiss, he’s leaning over, and it’s almost like she’s going on her back just a little bit, but how he has that nice grip behind her back is pretty cool," notes Cobb. Indeed, this is finally the part where, after realizing Peter really does care about her, Lara Jean confesses her own feelings in the middle of the lacrosse field. They decide to be an official couple, and, as Peter so beautifully articulated, "just trust." Sigh. When I was in high school, all boys cared about was sports and feeling you up. No one (I mean, no one) suggested you "just trust." This is about as high school rom-com as it gets, and I am 100 percent here for it.

This movie made me laugh, cry, swoon, and squeal with equal parts joy and jealousy, because, ugh. We can learn a lot about love from these two, and hopefully, we'll get a second installment of TATBILB sooner rather than later. I need to know what happens next!