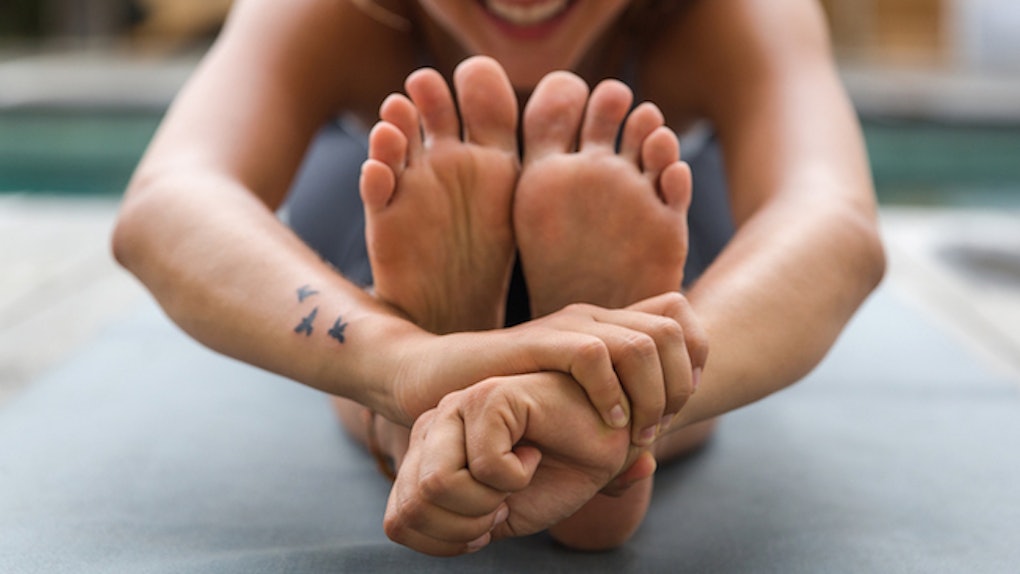 If you've quickly fallen in love with your routine yoga practice, then you know the magical, truly blissful feeling that comes with rolling out your mat. You get giddy over the mere thought of your daily flow, and you've been known to casually plan your entire life around your favorite instructor's class. People who go to yoga class solemnly swear by the fact that the highly effective ancient practice truly keeps them sane. But along with all of the magic and feel-good vibes of the practice, there are also a handful of super relatable struggles that dedicated yogis know all too well.

It's true that practicing yoga consistently can make you a much better and more genuine human being, if you apply the principles you learned in class in your life off of the mat. However, that doesn't mean that going to yoga class is all rainbows and butterflies, 24/7. There are so many little struggles that only people who love yoga understand — but don't worry, getting frustrated or tripped up over these things doesn't make you any less ~spiritual~.

If you can't go more than a day without your beloved yoga fix, you'll definitely find these 14 struggles eerily relatable.

1. When Someone Asks You To Hang During Your Fav Yoga Class

Uh, yeah, sorry. I'm busy that day. And every single day for the rest of eternity in that time slot, so please stop asking me.

2. When Someone Says, "I Would Do Yoga, But I'm Not Flexible Enough"

You feel bad rolling your eyes, because you probably uttered these exact words at the beginning of your own yoga journey. But you low-key want to shake your friend and simultaneously drag them to your favorite class because of how amazing they'll feel, inside and out, regardless of how flexible they are or aren't.

You don't need to be flexible to reap the benefits of yoga! *Claps aggressively to emphasize every word.*

3. When You're Late To Class, And You Try To Discreetly Tip-Toe In

You experienced what is likely an unhealthy amount of road rage trying to get to class on time, but alas, you're still late.

TBH, this is awkward as hell, and an invisibility cloak would come in handy right about now while you're trying to find a place for your mat. STOP STARING AT ME, PEOPLE.

4. When You Have To Use A Studio Rental Mat Because You Forgot Yours

As much as you'd love for every yogi before you to follow the studio rules and clean their damn mats, let's be real, guys: It doesn't always happen. Some studio mats are nasty AF.

Yeah, you'll be skipping chin stands for the day, as well as any other poses that require your face to get intimate with the mat.

5. When You You Realize There's A Substitute For Your Fav Yoga Teacher

You try to like the new instructor, and honestly, she seems great — but you're high-key extremely disappointed.

This might be a great time to practice that healthy sense of non-attachment that yoga calls for (or just quietly sulk in downward facing dog).

6. When Your Neighbor's BO Is Wafting Into Your Zen Bubble

Seriously? How hard is it to remember a few swipes of deodorant on the pits? Come on, fam.

7. When You Realize The BO Is Actually Coming From You

And then you try to use your yogic powers of focus to mentally will a stick of deodorant to magically appear in front of you at its earliest convenience. But of course, it doesn't work.

Is keeping your arms glued to your sides during warrior II frowned upon? Asking for a friend.

8. When All You Want To Do Is Breathe Deeply, But You're Congested AF

If you've tried hitting up your favorite yoga class when you're coming down with a cold, you know this struggle, girl. TBH, it feels like the teacher is personally targeting you when she says to inhale deeply. I mean, it's just cruel at this point.

9. When You Accidentally Fart During Twists And Bends

It's that terrifying moment when you realize you had Chipotle for lunch, and now there's no way you can hold it in during the twisting sequences. Time to draft some heartfelt apology notes to your neighbors.

10. Or When You Queef During A Headstand

Time to dye my hair, change my name, and move to Switzerland. Don't try to contact me.

11. When You Come Up Way Too Quickly From A Forward Fold

Hey, your teacher tells you to come up super slowly, vertebrae by vertebrae, for a reason, girlfriend. But sometimes, you don't listen, and the vertigo is real.

12. When Your Instructor Gives Everyone Mini Massages In Child's Pose — Except You

Real talk though, do I smell? Is it because of that pimple on my shoulder? What's going on?!

13. When You Think It's Time For Savasana, But Your Teacher Says, "OK, Time For A Little Core!"

OK seriously, we just did, like, 45 chaturangas. Can we save the core for another day? I just want to drift into my adult power nap now, thank you very much.

14. When You Finally Get To Savasana, And Your Stomach Puts On A Show

Stomach, this is not the time to be preparing for dinner. I'm trying to contribute to the quiet atmosphere of zen, spirituality, and presence. Rude.

More like this
25 Instagram Captions For Workout Pics & Being A #Boss In The Studio
By Marisa Casciano
The Netflix Reality Show You Should Watch, Based On Your Zodiac Sign
By Chelsea Jackson
Each Zodiac Sign Has A Lucky Day Of The Week That Goes With It & Here's Yours
By Chelsea Jackson
Stay up to date