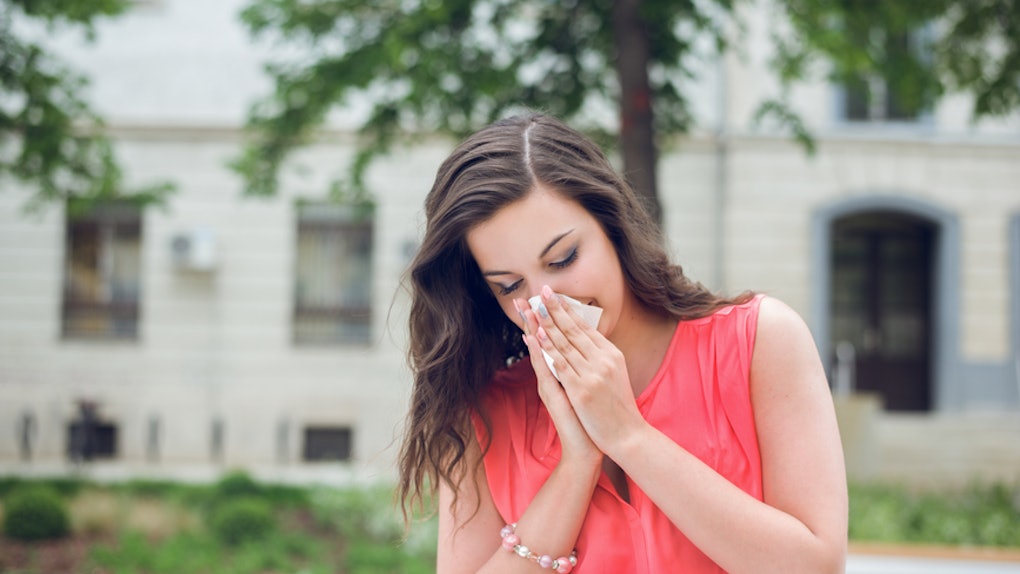 Have your Kleenex ready, and your "bless yous" on the tip of your tongue, friends, because sniffle season is upon us. I’m predicting it's about to get breezy and sneezy everywhere you turn, especially considering pollen levels are expected to spike early on this spring. Even though I’ve been battling allergies since I was born, I’m actually nervous this time around, because figuring out how to tell the difference between allergies and a cold might be slightly more difficult in 2018 compared to seasons past.

According to AccuWeather's 2018 spring allergy forecast, grass and tree pollen are already making the long trek south to north, so if you've been picking at that pesky tickling sensation in your nose, chances are, pollen is the problem. But think about it: Cases of the flu have been ridiculous this year, and a handful of common allergy symptoms overlap with those of the common cold. Unless you’re making doctor appointments every other week, how do you differentiate between sniffles and more serious symptoms?

Allergy and cold symptoms are a little too close for comfort. Generally, I'd always suggest consulting with a professional rather than self-diagnosis, but health care sucks, and I totally understand if you'd rather save on gas and forgo a hefty co-pay. Ergo, here are some of the most significant differences between sniffles and cold symptoms to keep in mind this spring.

Stuffy noses are irritating AF, but one of the tell-tale signs your runny nostrils are just reacting to the season is at the tippy-top of your calendar. According to Live Science, allergies flare up "immediately after exposure to pollens in spring, summer, or fall," while colds "tend to occur in the winter" (hence flu season).

Obviously, there's much more to a medical diagnosis than what month it is, but hey, the diagnosis has to start somewhere, right? Consider how the rest of your body feels in relation to your nose. If everything is relatively copacetic, other than the fact that you're now running low on tissues, consider the time of year you're in first. Chances are, a trip to the doctor isn't necessary.

2. How Long Have You Been Experiencing Symptoms?

When a cold comes on, the illusion that centuries have passed between the onset of your symptoms and when you start to feel healthy again is all too real, but that's all it is: an illusion.

According to the Centers for Disease Control and Prevention, cold symptoms should only last about seven to 10 days max. But allergies? Those suckers really stick around for the long haul. Medical News Today reports that allergy symptoms can last "several weeks" — yes, weeks — depending on allergens in the air.

You know how the onset of the flu is fast and furious? Well, cold symptoms plan their attack more slowly. According to Medical News Today, cold symptoms are gradual, so you might feel your nose start to run one day, and then a day or two later, you're battling chills and a fever on top of an endless stream of snot.

Allergies take after the flu in this respect: They hit you fast and hard. In fact, the U.S. National Library of Medicine states that allergic reactions "happen soon after contact with an allergen," usually within a couple hours or so.

4. Did You Take Your Temperature?

Fevers are the worst, but fortunately, if you're just dealing with a case of the sniffles, chances are your body temp isn't particularly heated.

According to over-the-counter medication manufacturer Vicks, if allergies do produce a fever, it's typically low-grade and nothing to panic over. Having said that, if you take your temperature and it reads anywhere from 102 degrees Fahrenheit or higher, make an appointment with your physician ASAP.

5. Are You Feeling Achy?

As someone who caught the common cold a whopping three times in a matter of one flu season (winter was clearly good to me), I can vouch that body aches are real AF, and when they happen, they're monstrous.

Luckily, Mayo Clinic reports, if it's just allergies, body aches aren't a thing, so if you're not in pain, consider yourself in the clear.

When you're muddling through a nasty cold, the only thing that's probably going to be scratchy is your throat, and even then, it's more like a painful, scratchy sensation than it is an itch.

Hay fever (aka allergies), on the other hand, will make you irritably itchy, Live Science reports. In other words, you'll rub your eyes, nose, and ears, and the slightest tickle in your throat will be enough to drive you through the roof, because it's that one weird itch that you just can't seem to scratch.

7. What Color Are Your Boogers?

TMI, I know, but don't tell me I'm the only one who opens up their tissue after a hearty blow to inspect whatever just flew out. According to internal medicine physician, Dr. Meena Kakarala, M.D., this is an extremely accurate way to determine if whatever you're going through is a case of allergies, or something more. She told Piedmont Healthcare,

Light yellow mucus is nonspecific, but green or darker secretions could signal an infection. This can turn into a bacterial infection if it is not controlled.

Sorry if that makes you squeamish, but examining your mucus for weird colors isn't odd; it's science, and a legitimate way to figure out what's going on in your body before heading to the doctor for confirmation. The more information you can offer, the better, right?