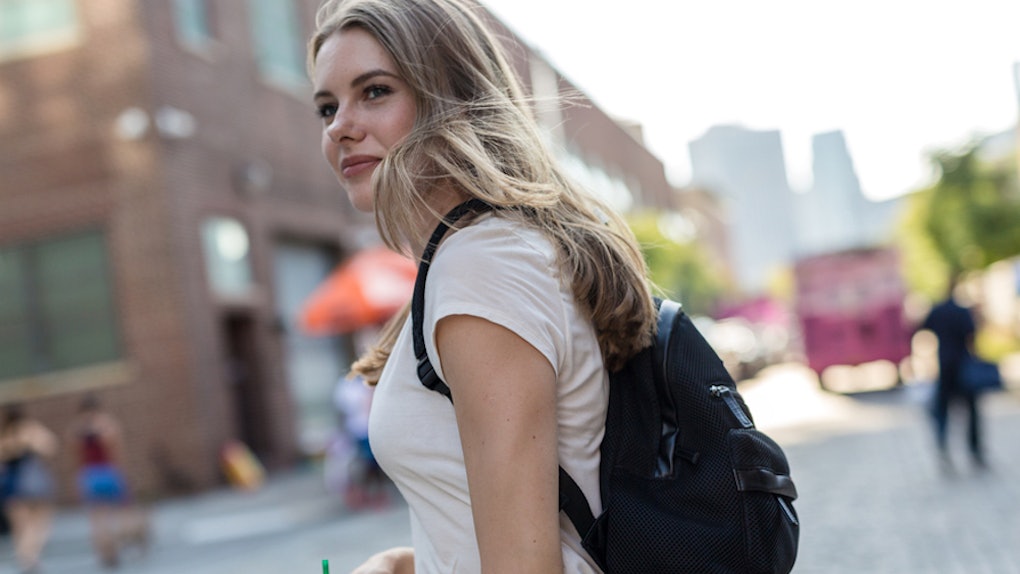 People Who Are Always Late Have These 14 Things In Common

So, you're running late. Are you honestly surprised? You're not sure what really slowed you down this time around, but here you are running to wherever you're supposed to be, and hoping your friends saved you a seat. You knew from the minute you hit snooze this morning that you'd inevitably be skipping out on breakfast, or at least just grabbing a bagel to go. Here's to crossing all of your fingers that the train isn't late, too. If you fit into the crew of people who are always late, then this is totally your reality. You try so hard to be on time, but life just seems to get in the way. Don't worry, because you're not alone. Those bustling city streets are filled with people falling a little bit behind, too.

As Julie Andrews said in The Princess Diaries, "A queen is never late. Everyone else is simply early." Now, we may not be royalty, but that sounds like a pretty good life motto to live by, if you ask me. You'd love a little extra time in the morning to get ready, or just sit for a while with your cup of coffee. But, on most days, you're struggling to get out the door and stick to your schedule.

Being late is honestly so common. And if you're anything like me, you normally own it up just to who you are, and you're proud of it. Tardy people, unite! We have these things 14 things in common.

1. You Always Have Coffee

You quite literally run on Dunkin', or at least some sort of caffeine. Everyone has a favorite coffee order, but you can almost always be expected to show up with a cup in your hand. Maybe stopping at Starbucks was the reason why you were late. Those drive-thru lines in the morning can seriously be brutal.

But, you just can't skip out on your usual cup of Joe because — if we're being honest — it's the only thing that sort of keeps you on time throughout the day. Without that extra kick, you'd probably be sleeping through class and your schedule on the reg.

2. You Can Never Wake Up To Your Alarms

No matter how many alarms you set for the morning, it never seems to be enough. Maybe you're like me where you put them on totally random times, in hopes that waking up in four-minute intervals will change the game. (Spoiler alert: It doesn't.) Or maybe you just use the most aggressive ringtones, like the one that sounds like somebody's blowing a horn right in your ear.

Nothing ever really works, and you find yourself rushing through your morning routine every single time. The worst is when you had plans with a friend, or a big exam in your class. Most days, you try to avoid scheduling anything too early just in case.

3. You Never Seem To Find The Right Outfit

You have a closet full of clothes, but there's not a single look that feels just right. Whether it's an outfit for the day, or picking out something perfect for a night out with your besties — you just can't seem to ever find the ideal top to go with that pair of jeans.

By the time you finally find what you're going to wear, you've torn through all of your roommates' closets, too. There are piles on the floor that you have to step over on your way out the door, and you swear you'll pick it up tomorrow. Fashion is hard, and probably one of the top reasons why you're always running late.

4. You Take Forever To Get Ready

Getting ready is a process, whether you're challenged at being on time or not. Picking out your outfit is just one step. There's also doing your makeup, fixing your hair, and packing your backpack for whatever life adventure you're about to go on.

In some ways, you probably make it a little more complicated than it has to be. But, if there's one routine you love, it's your self-care one. And you wouldn't feel quite as complete going into the day if you skipped something. After all, running late is already so frazzling. So, you might as well show up looking your best.

5. You Know The Best Lazy Hairstyles

On days when you truly don't have time to stick to your usual getting ready routine, you just have to settle for the lazy life. This means swapping out jeans for joggers, maybe outfit repeating if you just did your laundry, and topping it all off with an effortless hairstyle.

You have entire Pinterest boards dedicated to ponytails and braids that will have you looking your best, and require as little time as possible. Fishtails always appear to be way more complex than they really are, and you know that there's not a scrunchie in the world that can't solve your running late problems. And when in doubt, a baseball hat will always make for a sporty and stylish look.

You hate schedules, because you can just never stick to them. Whether it's actually something legitimate that got in the way, or just the usual life nonsense that seems to come up, you find yourself always being at least five minutes behind. Days when you don't have anything to do are the best, not just because you have free time, but because you're not required to be anywhere at any specific moment.

The clock is oh-so-stressful for you and your always-late soul. You dream of a day when you can ditch it and just live by the sunlight instead. Nobody really loves when their planner is packed to the brim, but it's a whole different experience for you when somebody's relying on you to be there. You'd rather be square.

7. You Hate When People Show Up Early

Hosting parties or having friends over is honestly your worst nightmare. Being the one who's always running late means that everyone else always shows up way too early. You can plan all week to make sure you're ready for their arrival, but then one friend will surprise you and show up to your doorstep 30 minutes before and you're still in a bathrobe. Haven't they ever heard of being fashionably late? That's more your style.

To avoid this situation, you normally just go along with the group when it comes to plans — and that's OK, because it's so stressful to have everyone on your schedule. They say the early bird gets the worm, but showing up late means you can get some brunch instead.

8. You Have Perfected The Awkward Walk In

In college, I got so good at walking into class late. It's that awkward moment when the professor has already started giving their lecture, and you open the inevitably noisy door and take your seat while everyone watches you. The first couple of times, I was totally embarrassed. I mean, I was basically calling myself out for waking up late, or prioritizing coffee. But, over time, being a few minutes late became all too regular and I perfected getting my laptop plugged in and settled without being too disruptive.

If you're constantly finding yourself chasing the clock, then you've probably had this moment happen more than once, too. You've perfected the gracious smile or avoiding eye contact. Owning your lateness is honestly the key. Sorry to all those professors. It wasn't you, it was totally me.

9. Your Friends Always Tell You To Be Ready A Bit Earlier

Your friends have dealt with you and your lateness enough to know that whatever time they decide on, they should tell you at least 15 minutes earlier. You're honestly sort of grateful that they give you this heads up, because it means you either have extra time to be your usual late self without any awkward "just a second" texts. Or, it means that you're the one who's on time for once — and what a weird feeling that can be for everyone involved.

Especially on nights out, or days when you're trying to squeeze the most memories in with your squad and need to stick to a schedule, your friends know that this extra step is so necessary.

10. You Send The "Just A Second" Text Too Often

When people pick you up for plans, you're prone to sending the "just a second" text. You always just need one more minute to finish up your makeup, or find the right pair of pants. It's a behind-the-scenes show that nobody needs to see, because it's honestly pure chaos, but has your friend waiting in their car every time.

"Be right out" actually means, "Be out in 10 minutes." And, "On my way" is a sure sign that you're hopping in the shower, and haven't even stepped foot in your driveway. Your besties know how to decode all these messages — but you feel bad any time you get in a situation with someone new and they don't know that you're going to be a little late. Oops!

11. You're Really Good At Multi-Tasking

Running late means that you need to get a million things done, basically all at once. You don't want to skip out on anything, but you also don't have the time to dedicate to each single item on the list. So, you multi-task.

In our modern world, this is actually a really good skill to have, because we're always so busy and juggling a ton of things. See, being late all the time has its advantages, too — teaching you life skills and all. You find yourself eating breakfast while walking to where you're supposed to be, and answering emails while straightening your hair with the other hand. Honestly, somebody should give you an award for efficiency for being able to get so many things done all at once.

According to Business Insider, people who are late on the regular are actually more creative souls. Truth is, you're an incredibly spontaneous person and get so caught up in multi-tasking and your perfect messes, that you lose track of time.

Maybe you're really into art (I understand exactly how you can lose yourself in your work in that case.), or are just always assuming you have more time to get things done than you actually do. In that way, you always look on the brighter sides of things and have a very type B personality. Don't be too hard on yourself. You're positive, and sometimes being tardy comes with that territory.

Making a mess is your forte. Whether it's the pile of clothes that built up on the floor after you tried to decide on your outfit, or just the bun you threw you hair in on the way out the door — being late always means running around and letting some things slip.

Once a week, you probably clean up all your messes and get organized. But, inevitably just a day or two later, they're right back where they started. Oh, well. Life is busy, and sometimes keeping it all together is seemingly impossible.

14. You're Forever Trying To Be Early

The struggle will forever be so real. Some days you seriously give up on trying to be early, but other days you think it through and somehow something still gets in the way. When you tell your friends what happened, it becomes sort of a "the dog ate my homework" situation, and they don't really believe your story. Sure, on the reg you're coming up with weird excuse, but some days you seriously did try and just can't seem to explain yourself.

Being forever late will always sort of be your thing, but lucky for you, you share a whole lot in common with a lot of other people in this world. You're not the only one who's falling behind, and these things keep the tardy totally united.