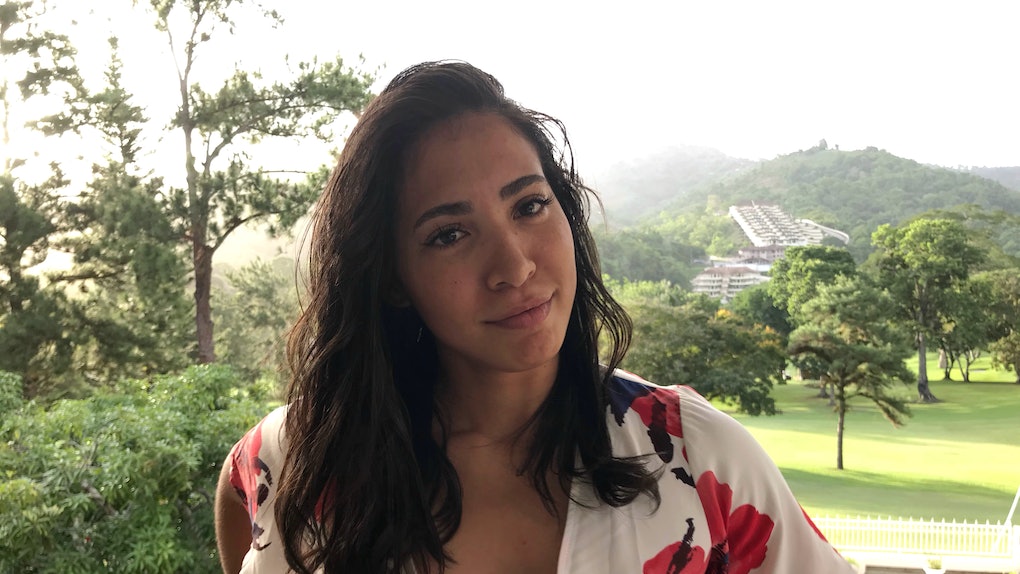 If classic Hollywood movies are your thing, I’m about to ruin Pulp Fiction for you. That’s the movie my date and I watched before my first one-night stand kind of failed and helped me realized that I'm demisexual. In other words, I only develop sexual attraction to people after I've gotten to know them.

Ten months after my last breakup, I realized that I hadn't been on a single date in nearly a year. So, yeah, you could say I was going through a dry spell — but the truth is that I didn’t really miss being in a relationship at all. I appreciated my time alone. Like a lot of recently single people, I was doing some soul-searching. In my case, that meant booking last-minute trips to New Orleans with my friends to get drunk. What I needed wasn’t a new partner (or drinking buddy, for that matter). No, what I really needed was a classic, no-strings-attached, casual hookup to feel like I was still in the game.

I turned to dating apps. I swipe on a regular basis and talk to new people on the apps all the time, but I've never had the guts to go home with any of them in the past. It’s not like I expected some Lifetime movie plot to unfold or anything (you know, the kind where I end up locked in a basement). It’s just that I wasn’t sure I was cut out for a one-night stand. I didn’t know how to convey to another human being that all I wanted from them was meaningless, sexually satisfying sex... for both parties. I'm well aware that it's absolutely normal and healthy to have a no-strings-attached hookup — that wasn't my problem. But what if I wound up hurting my match's feelings? What if they were a total assh*le about my request? Worse, what if they were cool with it? If they were, I didn't know if I could go through with it. Would I be into it?

So how did I end up in an Ikea-furnished bedroom with my date, John Travolta, and Samuel L. Jackson “like three little Fonzies”? I matched with a guy, we talked for a few days, and he invited me to ~hang out~ at his place and watch a movie. I know this sounds like a line (and it probably was), but he really is a cinephile, so it wasn’t entirely out of left field.

Despite his genuine interest in classic cinema, we both knew what was up. After the movie ended, my date clumsily disrobed, then protested when I insisted he wear a condom. He said they "didn't work" for him. We compromised (read: he put on a condom) and things were back on track. Well, sort of. Much like the jittery start to this whole ordeal, the sex itself felt shaky and unsure. Actually, his Ikea furniture was a pretty significant metaphor for our encounter. You know how sometimes you put together Ikea furniture and it does the trick, but it doesn’t quite look the way it’s supposed to or do the things it should? Well, the sex was very much just like that.

The aftermath was worse. As we lay there in complete silence, I became hyperaware of every single sound coming from the room, like the nervous grumbling of our stomachs and the incessant hum of the air conditioner. But inside, I wasn't humming. I felt nothing. Not relief, not guilt, not satisfaction, not even a sense of accomplishment for having actually gone through with my first one-night stand. I thought I would at least be proud of what felt like a coming-of-age moment, but instead, I didn’t care.

There was something else going on that night that I wasn’t ready to own up to until now. Because my date and I were practically strangers, I struggled to feel any intimate connection with him. Physically, I was there in his room, but emotionally, I had checked out when the Pulp Fiction end credits rolled. I feared it was obvious to us both. Like, when we laid awkwardly next to each other afterward, I couldn’t help but think of Mia and Vincent’s dinner conversation in the movie. During a lull in their friendly outing, Mia says, “Don’t you hate that? … Uncomfortable silences. Why do we feel it's necessary to yak about bullsh*t in order to be comfortable?" She goes on to explain, “That's when you know you've found somebody special. When you can just shut the f*ck up for a minute and comfortably enjoy the silence." Now, I don’t know if I should be taking dating advice from the fictional wife of a 1990s gangster, but here’s what I gleaned from that: Uncomfortable silences are uncomfortable for a reason, and in my case, it was because I wasn’t emotionally engaged in this ~relationship~.

It wasn't just that I had absolutely no desire to hook up with this person again — I had no desire to do this again with anyone. Ever. In that moment, I realized something I had suspected for years: I identify as demisexual.

Demisexuality falls on the sexuality spectrum somewhere between sexual and asexual, which is probably why some people might think my stance simply makes me a "prude" or a serial monogamist (a title even I have given myself in the past). But the term doesn’t mean that demisexuals experience a halved or incomplete sexuality. The Asexual Visibility and Education Network (AVEN) defines a demisexual person as someone "who does not experience sexual attraction unless they form an emotional connection." Some people might say that waiting to have sex until you develop a bond with someone is an admirable choice, but that's a mistake. Demisexuality isn't a moral code; it's an innate orientation.

Elizabeth Schroeder, EdD, MSW, and sexuality education expert tells Elite Daily, "[The term] 'demisexual' tends to describe someone who doesn't feel sexual attraction for others unless there's an emotional connection first. This is different from asexuality, which describes someone who may have strong, loving relationships, but for whom sexual attraction is not part of the relationship." She adds, "How does someone know they're demisexual? Like with any other sexual orientation, people discover their feelings of emotional and physical attraction. Some people aren't quite sure how they identify and end up trying different names out that may feel close but don't quite fit. And then one day they read or hear a particular description and then realize, 'Oh, that's me!' That experience can be a huge relief for people who have been feeling like something's not quite right."

Furthermore, just because demisexuals need an intimate emotional connection to experience sexual attraction to a specific person doesn’t mean that people who are demisexual can’t experience sexual desire in general. That's why I was able to go through my one-night stand in the first place. Demisexual people can still experience sexual attraction outside the confines of a serious, romantic relationship. According to Asexuality.org, the emotional connection does not have to be romantic in nature and can often occur between friends.

It’s no coincidence then that all of my romantic relationships grew from friendships and that I’ve never been genuinely interested in anyone I didn’t know on a personal level. In the past, I rationalized this differently. I told myself I wasn’t comfortable dating people with whom I had no social context because it meant I had no safety net — nothing to hold my dates accountable when they let me down. That was true, but it wasn’t the whole story. I've definitely checked people out in line at Trader Joe's, but that wouldn't necessarily be enough for me to pursue anything with them. Instead, I'm more attracted to people with whom I've developed an emotional connection over time.

Demisexuals can still experience romantic attraction without experiencing sexual attraction, which keeps things the right amount of confusing. (This is dating, after all.) As much as I’ve enjoyed exploring this aspect of my identity, I don’t plan on holding on too tightly to the demisexual label. For me, the label feels more reductive than it is affirming because I worry that it will confine my own experiences and the ways in which other people get to know me. Although it continues to help me understand my approach to dating, it’s certainly not everything I’d like potential future dates to know or focus on. It’s not all I’d like to focus on, either.

I spoke to Schroeder about whether or not it was normal to feel this way and she explained, "I think we are living in a time when there is a lot of pressure placed on people to fit into one of these societally-created categories — and these categories, even as they are growing and expanding, still don't necessarily fit for everyone. Identifying in a particular way can be very powerful — especially for anyone who is not heterosexual. There can be empowerment and community that identifying in a particular way provides. At the same time, no one should feel they need to attach a name to how they feel if it doesn't feel right to them."

I still believe the demisexual label accurately portrays how I've felt (and dated) for a long time. Most notably, I'm happy to know that my approach to dating doesn't make me a prude or a tease; it's just who I am. But I also know that I still have so much more to learn about myself and I'd like the opportunity to continue doing so on my own terms.

By now, you’ve probably guessed that yes, being demisexual means online dating might not be as effortless for me because it means putting myself out there with people I know nothing about. But I’m not about to let it stop me from swiping, matching, and flirting with my matches, because that’s one way to establish an emotional connection. And speaking of online dating, I’m not rushing to update my bio to say “demisexual” anytime soon because there’s so much more to my identity and to me that I’d like people to know first.