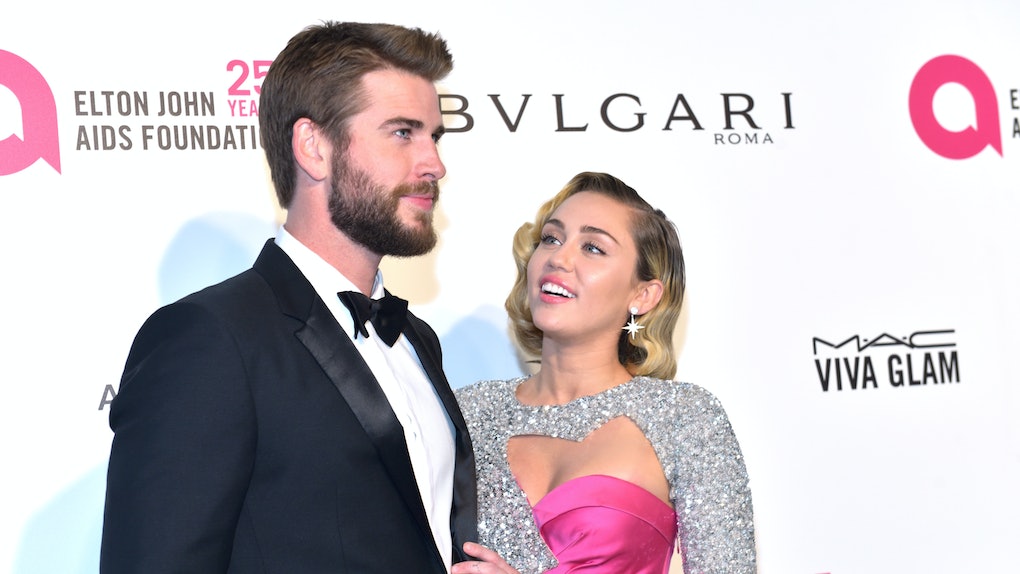 If her 2009 banger "The Climb" taught you anything, maybe it "ain't about how fast you get there" after all. Though Miley Cyrus' new single status is enough to make you ugly-cry in the shower, sources tell PEOPLE magazine that Miley Cyrus and Liam Hemsworth reportedly aren’t rushing to divorce. (Elite Daily reached out to representatives for both Cyrus and Hemsworth, but did not hear back in time for publication.)

A source close to the couple reportedly described the on-again, off-again nature of Cyrus and Hemsworth's relationship to PEOPLE, and reportedly said, “They are great together when they are happy. There is absolutely hope that they will get back together again."

For those of you who weren't obsessed with the 2010 teen drama film The Last Song (can't relate), Cyrus and Hemsworth first met in November 2009 during filming, when Cyrus was 16 years old and Hemsworth was 19.

With a number of public engagements, breakups, and semi-autobiographical love songs — their colorful relationship spanning the past ten years has been anything but linear. Though Cyrus and Hemsworth are currently taking time apart, the source attests that there may eventually be room for a happy ending in their love story. "They are having a break right now because they needed it. It was a bad situation with a lot of disagreements," the source reportedly said. “They both agreed it’s better to spend time apart, but this doesn’t mean their relationship is completely over."

Bittersweet but hopeful (like much of Cyrus's music), it seems the pair is taking some time for themselves, but reportedly, their IRL Last Song love story may not be completely over. After nearly a decade of romance and less than year of marriage, a statement from the actress' rep on Aug. 10 confirmed that the couple was is taking a break.

"Liam and Miley have agreed to separate at this time," Cyrus' rep told PEOPLE. "Ever-evolving, changing as partners and individuals, they have decided this is what’s best while they both focus on themselves and careers." The rep also expressed that Cyrus and Hemsworth are hoping to continue co-parenting their furry family (which reportedly consists of of eight dogs, four cats and one pig.) Gotta' love Hollywood.

Though the news caught fans by surprise, sources say that those close to the couple weren't totally shocked by the breakup. "It's been a rough year," a source reportedly told E! Online. "They have been trying to make it work for months now but haven't felt they were connecting on the level they were feeling when they got married last year."

If you thought the break couldn't hurt any worse, latest reports are speculating that the couple had already spent months apart before officially calling it off, and that Cyrus was the one to pull the plug.

“Miley was the one who ended things with Liam,” the source told Us Weekly on Aug. 12. “They haven’t been together for months.”

If you haven't been keeping up with the 26-year-old singer's colorful Instagram, she's been spotted around Italy notably not wearing her engagement ring, captioning photos with "New day. New adventure" and "Life’s a climb... but the view is great." In addition to her recent kiss with Kaitlynn Carter, it appears that Cyrus has been enjoying her single time in nature. (As well as enjoying wearing lots of Versace.) The 29-year-old Hemsworth also took to the 'gram to call the divorce a "private matter" and to wish Cyrus "nothing but health and happiness going forward."

Though for now it's unclear what's "waiting on the other side" or just how fast they'll get there, sources say there may eventually be hope for Cyrus and Hemsworth to climb back into each other's hearts. Cross your fingers.