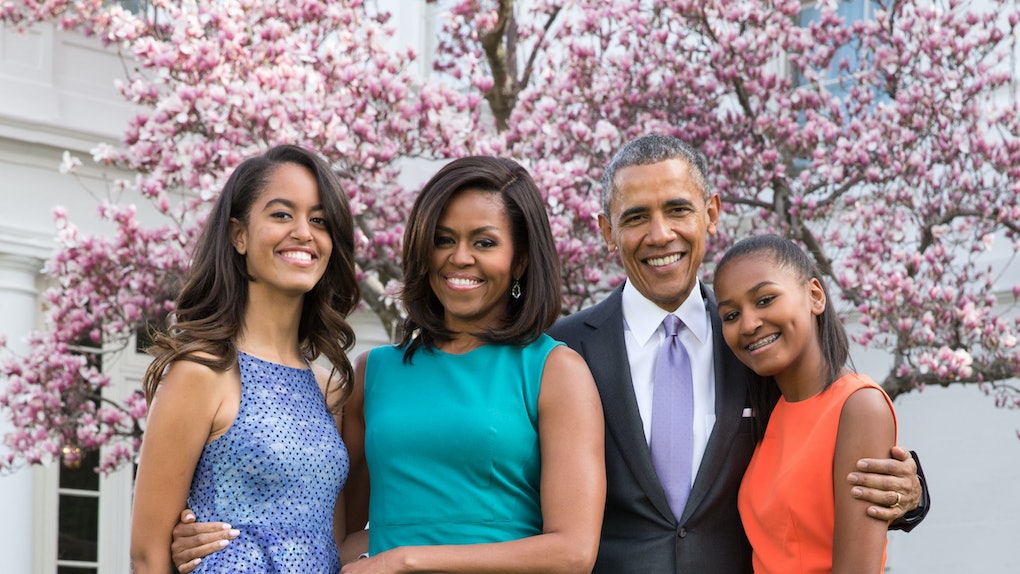 I don't know about you, but I always look forward to the sweet messages Barack and Michelle Obama share for one another on special holidays. The former residents of 1600 Pennsylvania Ave. sure know how to tug at your heartstrings with even the simplest social media post. Whether it's a throwback photo or a heartfelt message (or both!), the Obamas never let down their followers when it comes to hyping each other. Michelle Obama's Father's Day 2019 post for Barack is no exception, and you're definitely going to love how she threw it way back for the Father's Day photo.

On Sunday, June 16, Obama took to Instagram and Twitter to share twinning Father's Day messages for her husband, Barack Obama. The short-but-sweet message is accompanied by what might be one of the cutest #TBT pics to hit the internet. In her post, Michelle writes, "Pretty grateful for this guy. Happy Father’s Day!" OK, that's nice and to the point, but what you're really gonna want to see here is the beyond adorable photo of Sasha and Malia with Barack.

Obama didn't specify just how long ago this picture was taken, but you can tell it's at least from either shortly before or at the very beginning of Barack's presidency in 2008. TBH, I don't even need an exact year for this pic to appreciate how happy and smiley Barack and the girls are as they enjoy each other's company.

Ugh, I almost can't handle the cuteness of this photo, and it kinda makes it hard to believe that little Sasha is now a high school graduate and Malia is already attending college at Harvard University. It almost makes you wish Barack would come through with one of his classic dad jokes right about now to keep you from getting ~emotional~ over the Obama girls growing up so dang fast. If you do need something to help you crack a smile, you can look to the fact that it appears Barack is donning his famous "dad jeans" in the throwback pic, and "dad jeans" on Father's Day is kind of a dad joke on its own, right?

Jokes aside, Barack got serious for his Mother's Day post to Michelle Obama this year back on Sunday, May 12. He seemed to have had a similar idea as Obama, as he posted a picture of his wife and their two girls with a meaningful caption that read, "Happy Mother's Day to the most caring, brilliant, funny, and grounded woman I know—a perfect role model not just for our daughters, but so many others. Love you, [Michelle Obama]." Barack chose a more recent snapshot of the girls, but the sentiment was heartfelt all the same.

OK, I think that's about enough proof to show how the Obamas absolutely slay the game when it comes to showing some social media love for each other to celebrate special holidays and milestones. With Barack's birthday coming up on Aug. 4, it looks like it will be Obama's turn once again to come up with a little social media tribute. Now, you'll just have to wait and see if she opts for another #TBT moment.