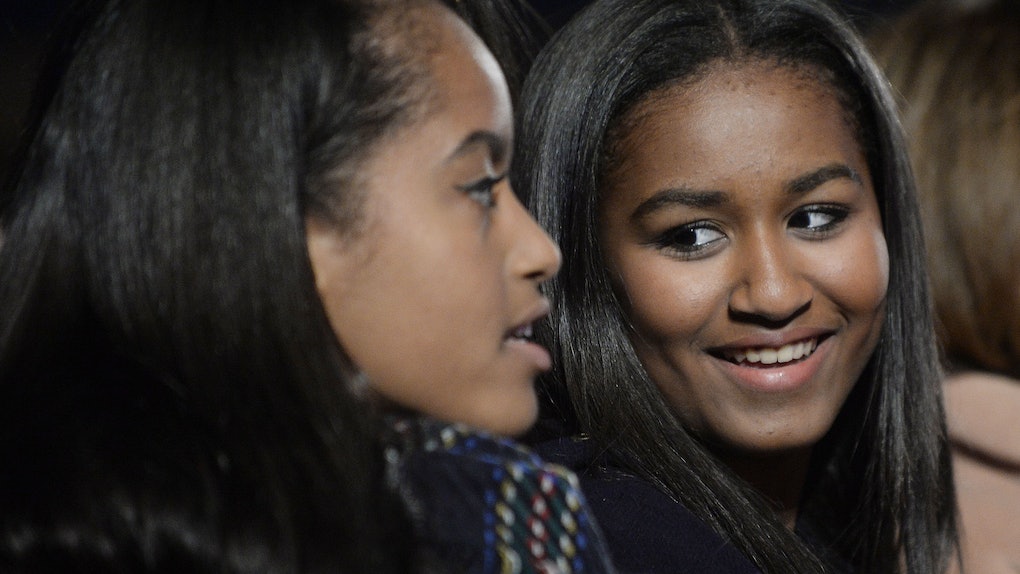 Congratulations are in order for Sasha Obama! Sasha Obama graduated from high school, which not only means no more summer homework (!!!), but that she's officially all grown up. Everybody, let's give her a round of applause (and then sulk about how old we are now).

According to Us Weekly, Obama crossed the stage on Sunday, June 9, with her parents Barack and Michelle Obama, and her big sis Malia looking on. Her school, Sidwell Friends School in Washington, D.C., posted a photo of the graduating class on its Instagram page, which shows Obama wearing what appears to be an all-white dress with her hair flowing flawlessly at her shoulders. The photo was posted alongside a quote from 2019's commencement speaker, Sheila Johnson, which says, "Life has never been about you or about me. Life and all that matters within it has always been about us." The post also congratulated the graduates, adding that the school "can't wait to see the great things [they] will do!" Aww!

You might have to squint to see her since the graduates are kinda far away from the camera, but you can see Obama in the second row from the back on the left side.

Can you believe it? IDK about you, but it seems like yesterday to me that Obama was a young child entering the White House and now she's reportedly on her way to the University of Michigan. They grow up so fast!

In honor of the big day, Obama's family reportedly threw a joint party with Joe Biden's fam. Apparently, the former vice president's granddaughter, Maisy Biden, went to school with Obama and was also among the graduating class, creating the perfect opportunity to celebrate together. According to The Hill, Biden, who is a 2020 contender, spoke about the party on June 11 at a campaign event in Iowa, saying that it was the perfect celebration given that Obama and Maisy are so close. “Her best friend is Sasha Obama. Barack and Jill and the whole family, we had a whole get together," he told the audience.

That's not the only shindig Obama has been to as of late, either. On May 24, she also went to prom. For the event, she opted for a formal floor-length, all-black spaghetti-strap dress with a thigh-high split, pairing the gown with a trendy smokey eye and sleek tresses slicked to the back. Her date, on the other hand, dazzled in a simple tuxedo. If you missed it, you can get a look at some pics here. And prepare to be amazed, just like most of Twitter was upon seeing the photos.

The photos also had people feeling super nostalgic, tweeting things like, "We getting old y'all" — so you should probably brace yourself for that before you go clicking.

But let's just face it: Obama, like everyone else is the world, is getting older. And she's seemingly doing so gracefully. Here's wishing her lots of success in her journeys to come.