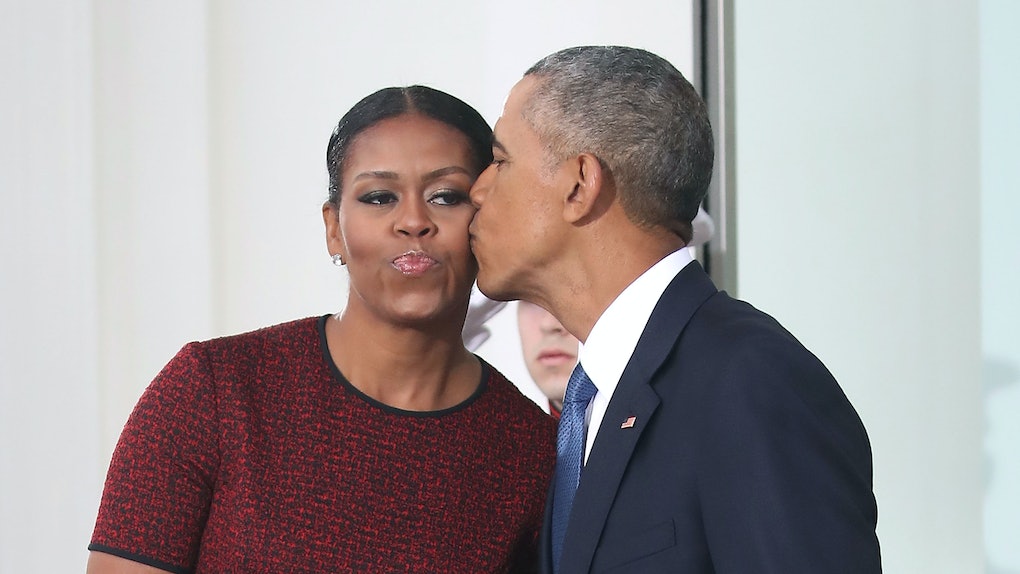 At this point, you have most likely seen your fair share of Mother's Day posts in your Instagram feed. And while warm and fuzzy photos of your friends with their moms are undeniably adorable, Barack Obama's post for Michelle Obama most definitely takes the cake. So, if you haven't already taken a look at Barack Obama's 2019 Mother's Day post for Michelle, it deserves all the likes in the world, and then some. It refers to the former First Lady as "a perfect role model," and while it totally pulls at my heart strings, he's certainly spot on.

On Sunday, May 12 (aka Mother's Day!), Barack Obama recognized Michelle Obama in the sweetest way possible. With similar sentiment to his Mother's Day post from last year, the former President honored Michelle as the lovely wife, mother, and woman she is, with a photo featuring Michelle hugging their two daughters, Malia and Sasha, at the Great Wall of China. And while the setting is undeniably gorgeous (I mean, really, the Great Wall is pretty remarkable), having the three of them hugging in the foreground makes it 10 times more meaningful. Definitely take a look at it for yourself, below. In my opinion, it's almost too cute for words.

OK can someone with ~skills~ try Photoshopping me into this family photo, please? I'm suffering from major #FOMO right now.

While the photo of Barack's loving family is undeniably a tear-jerker on its own, the caption of the post is — as you can probably imagine — beautiful beyond belief.

Happy Mother's Day to the most caring, brilliant, funny, and grounded woman I know—a perfect role model not just for our daughters, but so many others. Love you, @MichelleObama.

Of course his sentiment is heartwarming, but let's face it: Barack is definitely right. There's no denying that Michelle is a pretty fantastic role model — not only for the two of their kids — but also for the kids and young women who look up to her.

Most recently, Michelle made a trip to Spelman College in Atlanta, Georgia on Saturday, May 11. Surprising a group of students who had studied her New York Times Best Seller, Becoming, Michelle spoke to the group of 18 students about having faith in themselves, according to the Atlanta-Journal Constitution. She shared how she realized her own capabilities throughout her eight years in the White House, comparing her own education and abilities to that of world leaders. Before parting ways with the students, she shared one last bit of advice, telling them, "The biggest challenge to overcome now is believing in yourself." Sounds like the advice of a pretty good role model to me.

While children and spouses/partners alike are honoring all the mothers in their lives today, the people who this day is all about are also focusing on honoring their own mothers. On Friday, May 10, Michelle posted to Instagram, noting just how much she how much she appreciates her mother. She credits her mom for helping her form all of her fantastic parenting skills. She also makes note of how much she loves her two daughters and everything they have been through together. To be completely honest, it's so sweet and it really makes me wish that I, too, was an Obama.

Michelle Obama is a really remarkable woman, and it's really no surprise Barack recognizes that. His post for her is honestly adorable, and if you don't throw it a "like," I'm 100% judging you right now. Anyway, here's to recognizing all the special women in your life today — there's no doubt in my mind that the FLOTUS is one of them.