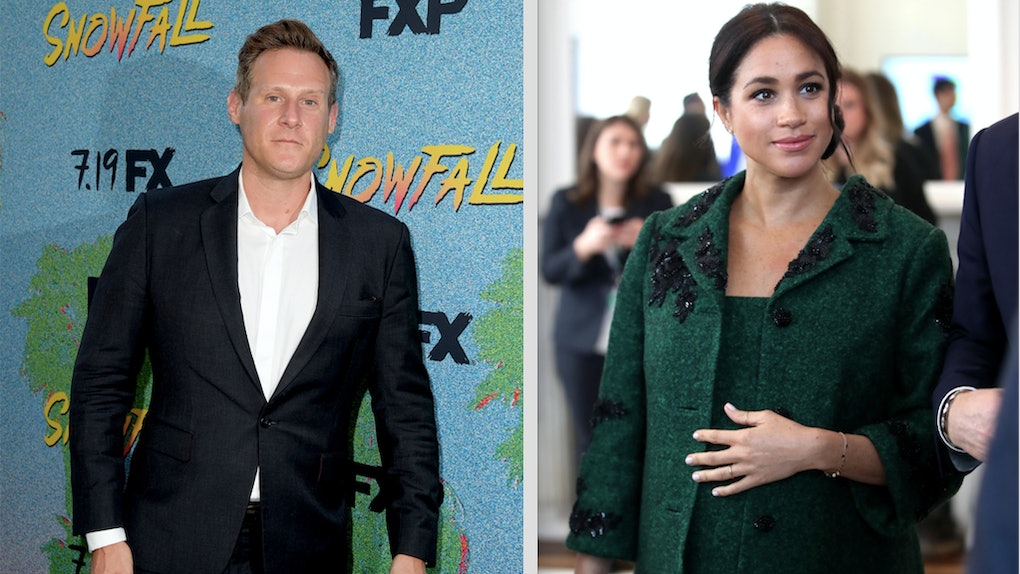 One of my favorite pearls of wisdom via Sex and the City was dropped ever so eloquently by Samantha Jones in the season 3 episode, “Easy Come, Easy Go” after a drunk Mr. Big comes on to Carrie (who has moved on and is in a happy, healthy relationship with Aidan). “There's always a contest with an ex,” she explains. “It's called 'who will die miserable.'" Let’s be real — deep down, many of us are petty AF (myself included). As such, it's safe to say I had some feels when I found out Meghan Marke's ex Trevor Engelson just celebrated his second wedding. Because whether the Duchess of Sussex knows it or not, she’s been in a contest with ex-husband — and winning for quite some time now. Now, things just got interesting, to say the least.

According to Entertainment Tonight, Engelson, a Hollywood producer, celebrated tying the knot with Tracey Kurland, a nutritionist and heiress to a multimillion-dollar empire (NBD) in Montecito, Calif. on May 11 — just one day after Baby Sussex was born. And that’s not the only instance in which Engelson’s timing has been questionably coincidental. He became engaged to Kurland just two weeks after Markle casually said “I do” to Prince Harry at Windsor Castle. Oh, and BTW, Engelson's recent wedding party also took place almost exactly one year to the day after the royal wedding. Competitive much?

Still, it seems that Engelson wasn’t attempting to compete with how delightfully extra the extravagant royal wedding was, and TBH, why would anyone even bother trying? Entertainment Tonight reports that the whole affair was pretty laid-back. Guests spent the day chilling at the beach, hanging by the pool, and playing some casual cornhole. Then, they partied the night away under a tent at Rosewood Miramar Beach.

“It couldn’t have been more different than the royal wedding,” a source told the news outlet. “This was not stuffy! It was fun and casual and absolutely beautiful.”

Admittedly, I was a tad confused when I read the headlines, given that multiple outlets reported that Engelson and Kurland already said “I do” at a private home in Hidden Hills, Calif., back in October of 2018. (Elite Daily has reached out to Engelson’s rep for a comment, so this story will be updated with any clarification that's provided). However, a source told Entertainment Tonight that the wedding happened this past Saturday, and guests were posting pictures of the wedding festivities to prove it. So, it's possible that the events on May 11 were merely a celebration for the wedding that already occurred.

While it’s never easy to watch your ex move on, something tells me Markle is probably managing just fine. After all, she’s reportedly the one who initiated the separation with Engelson in 2013, a year before they eventually divorced. Not to mention, she’s got something new to distract her: Archie Harrison Mountbatten-Windsor, her and Prince Harry's new son, who was born on May 6. Now that she and the Duke of Sussex are busy raising their first child together, I doubt she’s dwelling on Engelson’s recent nuptials. Still, she and Engelson did date for a whopping seven years (and were married for more than two), according to People, so they obviously have some substantial history together. Given that his proposal to Kurland was publicly reported back in June of 2018, at least Markle has had some time to get used to the idea.

If you’re wondering who TF Trevor Engelson is (besides Markle’s ex, of course), the producer is known for his work on films like Remember Me and License to Wed. Oh, and he’s also working on a new TV show about a guy whose ex-wife marries into the British Royal family, and how they navigate raising a kid together while also dealing with the media. Sound familiar? While Engelson and Markle don’t have any children they share custody of, it’s pretty obvious that the show draws inspiration from real life events.

But while her ex-husband may be digging up the past in his upcoming “divorce comedy” pilot, Markle seems to have happily moved on. I kind of doubt that Markle has an ounce of pettiness in her — she seems to remain ever so gracious, classy, and mature, no matter the circumstances. But still, if raising a bundle of joy with a dreamy prince isn’t the definition of #winning, what is?

More like this
When Are Ariana Grande & Dalton Gomez Getting Married? Here's The Reported Tea
By Corinne Sullivan
18 Celebrity Couples Who Got Married In Secret
By Corinne Sullivan
Travis Barker Tattooed Kourtney Kardashian's Name On His Chest
By Joyann Jeffrey
Stay up to date