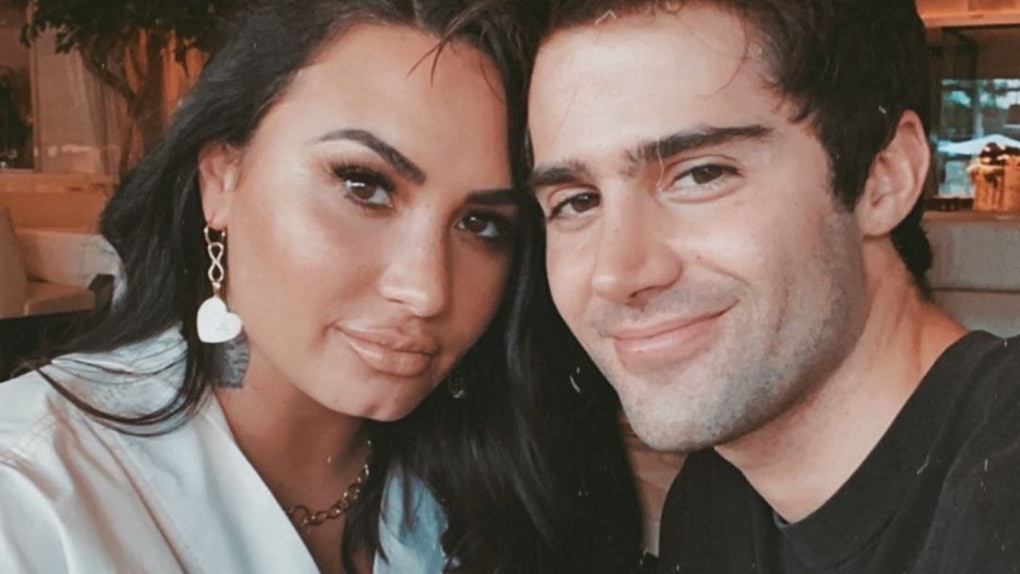 Max Ehrich Said Demi Lovato Exploited Their Breakup At The PCAs, Which, Ew

As if 2020 was not stressful enough already, Max Ehrich is out here leaving the messiest comments on Demi Lovato's Instagram. On Nov. 19, she posted a series of photos of herself rocking a pink sequined suit and a 🔥 new haircut, which somehow prompted her ex to spill some thoughts. Ehrich called out Lovato for "exploiting" their breakup during her iconic speech at the People's Choice Awards on Nov. 15.

"Stop talking about me on awards shows. thanks," he wrote, according to Cosmopolitan. He added, "Exploiting our breakup for clout at PCA is not chill.”

While it's true Lovato joked about her whirlwind relationship with Ehrich at the PCAs, I'll leave it to you to judge her remarks — and who's really chasing "clout" in this situation.

"Honestly, this year has been the longest three years of my life," she said, name-checking a few casual accomplishments like performing at the Grammys and singing the National Anthem at the Super Bowl. "But then COVID hit and everything shut down, so I did what everyone else did, I went into lockdown mode and got engaged," she said. She added, "I binged seven seasons of Pretty Little Liars, got unengaged, and then I went looking for aliens in the desert, so basically the same as everyone else."

Look, I've never ended an engagement with a multi-platinum recording artist who happens to have 14 Teen Choice Awards and two Grammy nominations under her (sequined) belt, so I can only imagine it's tough. If Ehrich wants his privacy, that's understandable.

But! Considering his shenanigans since their split in September, his Instagram comments look pretty sus. May I remind you of a few things? After the breakup, he was photographed crying on the beach where he proposed — a move some believed he orchestrated himself. He also claimed he only learned of the breakup through the tabloids (though a source reportedly claimed to E! News that Lovato broke the news to him first). Then, he seemingly accused Lovato of "using [him] as a pawn and a PR stunt" and dropped a song about their split. Ehrich also posted photos that prompted speculation he was moving on with American Idol alum Sonika Vaid... even though she reportedly lives with her boyfriend. Most recently, he appears to be linked to singer Mariah Angeliq.

Meanwhile, Lovato is reportedly extremely over Ehrich. “Demi wants no contact with Max at this point,” a source reportedly claimed to E! News in September. “She is completely embarrassed at the way he’s been acting and putting their relationship on blast via social media. She wants nothing to do with him. Demi is completely done and doesn’t want to see him again at this point. She can’t believe she fell into his trap and is really upset over it.”

It seems like it's time for everyone to move forward, no?