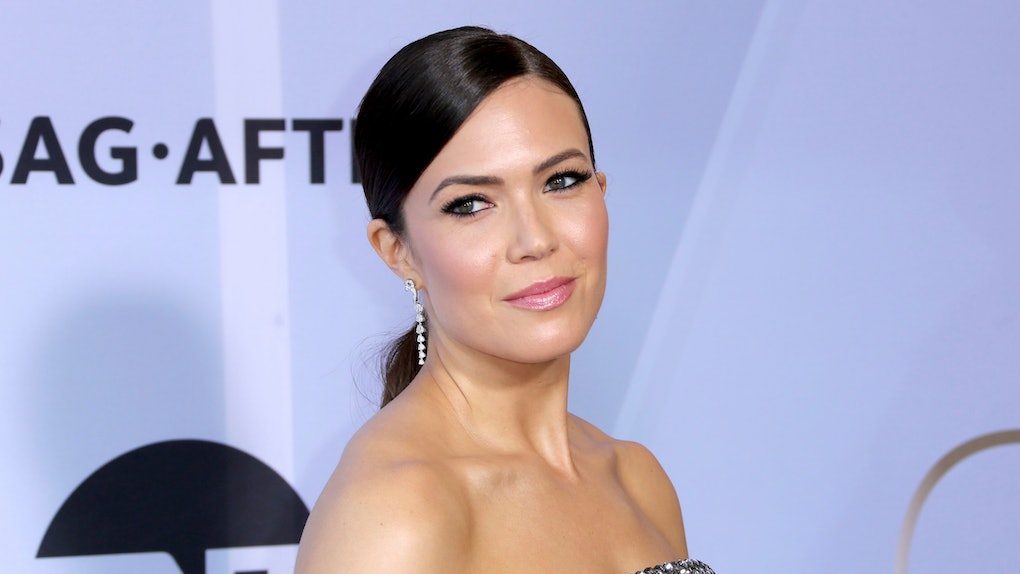 Awards season is officially underway, and the 2019 Screen Actors Guild Awards are here to prove that celebrities are taking their red carpet fashion and beauty looks to the next level this year. One of the fashionable faces gracing the red (well, silver, thanks to Reynolds Wrap) carpet this year is none other than everyone's favorite actress, Mandy Moore. This pretty much goes without saying, but Mandy Moore's 2019 SAG Awards dress is so unbelievably stunning, it's almost unfair.

For this year's awards ceremony, the 34-year-old actress was styled by Kevin Ericson and Cristina Ehrlich and donned a gorgeous, long black Jason Wu Collection gown that looked like it was made for her. The dress was fitted at the bodice and fanned downward to include a long train and a thigh-high slit, while the upper portion of the gown featured off-the-shoulder sleeves and a silver rhinestone neckline. As for accessories, Moore rocked minimal jewels, apart from sparkling Niwaka drop rhinestone earrings, and shoes by Jimmy Choo.

The star's iconic chocolatey brown locks were slicked down into a low ponytail with a side part by celebrity hairstylist Ashley Streicher. Pardon me, but I literally can't stop swooning:

When it came to the This Is Us star's makeup, celebrity makeup artist Kindra Mann gave Moore a beat to die for. A relatively simple yet still bold look, Mann used several Burt's Bees beauty products, heavily lining Moore's eyes in black and giving her lashes for days to boot. The rest of Moore's look embraced pastel pink, with a light dusting of blush and glossy pale pink lips.

This year, Moore is making her appearance at the 2019 SAG Awards alongside the rest of her This Is Us castmates, as the team was nominated for the award for Outstanding Performance by an Ensemble in a Drama Series. And after all of the talk about the series being seriously snubbed at this year's Golden Globes, fans of the Pearson family are undoubtedly very excited to see the crew all together again for the SAG Awards, and are hopeful for the fam to take home the win.

In addition to Mama Pearson's ensemble, the rest of the This is Us clan came out in full fashion force as well. Chrissy Metz, Justin Hartley, Susan Kelechi Watson, and Milo Ventimiglia all looked positively radiant in their respective ensembles. And of course, we can't forget Sterling K. Brown, who is also nominated for Outstanding Performance in a Drama Series for his individual role in This Is Us, and who looks so damn handsome in a sleek black suit.

After all of the heartbreak that This Is Us has already brought us, here's to hoping that Mandy Moore's and the rest of the casts' glamorous looks will bring us all the luck we need for this cast to bring the SAG Award home.