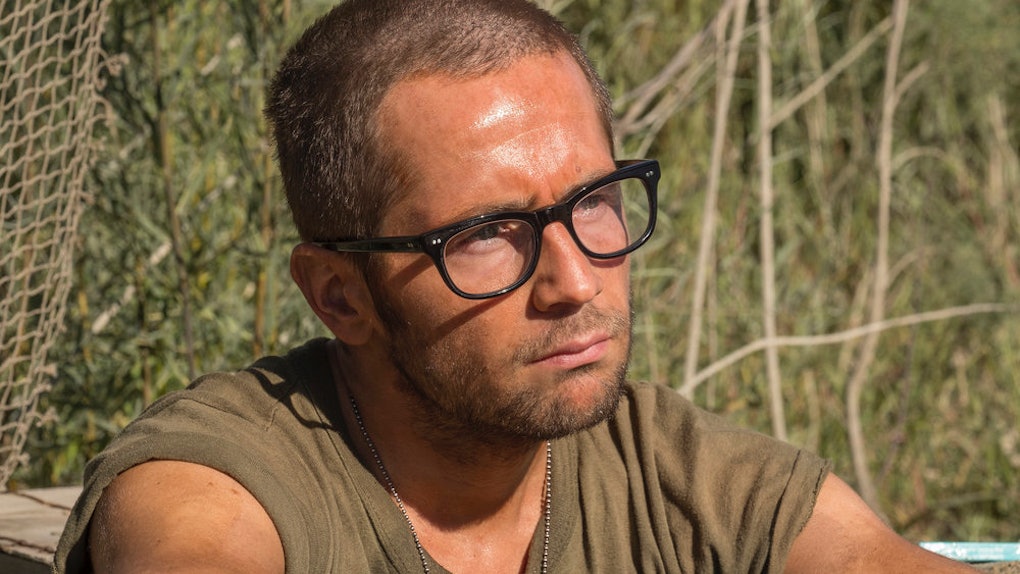 Nicky's Vietnam Story On 'This Is Us' Was Finally Revealed

This Is Us loves family reunions as much as Randall loves bringing people home, but when the Big Three tracked down their long-lost uncle Nicky on Jan. 22's episode, the meeting definitely wasn't a Hallmark-worthy moment. Still scarred from his last encounter with Jack in the '90s, Nicky was initially reluctant to open up to the Pearsons, but he finally revealed the details of his breaking point during the war. Nicky's Vietnam story on This Is Us was heartbreaking, but it looks like Randall might be readying a new bed at his house for Uncle Nicky soon.

Forever the subject of surprise reveals and cliffhangers, the existence of Nicky (Michael Angarano) was first revealed when Jack (Milo Ventimiglia) studied an old photo from his service in the Vietnam War that included a soldier with "Pearson" on his uniform. As the brothers grew up, Jack often protected Nicky from the wrath of their alcoholic father, but his watchful eye over Nicky proved even stronger when the younger Pearson was drafted into the war. Jack enlisted to help Nicky reel back from his worsening state of mind, but after securing a place for him in his own unit, he realized that Nicky was more damaged than he believed.

In the fall finale's Vietnam flashbacks, Nicky was seemingly caught in a boat explosion, which fans would've interpreted as his anticipated death if the same episode hadn't confirmed that Nicky didn't actually die during the war. Amidst Tess and Annie wondering if Randall would once again bring a strange relative home, Kevin, Kate, and Randall used one of Jack's old postcards from Nicky to find his home and question why Jack never told them the truth about him. It turns out that the details of the boat explosion were far more traumatic than fans could have predicted.

Fresh off his belief that a soldier couldn't trust the local women and children, Nicky woke from a nap to see a village boy above him. The boy stared him down, prompting Nicky to initially taunt him, but two could play at that game. The kid, also the son of the Vietnamese woman who gave Jack her necklace, stole Nicky's glasses, creating a tentative bond between them. Nicky invited the boy out on a fishing boat, showing him how to toss a hand grenade into the water to force the fish to the surface.

Nicky's hand then slipped when he tried to set off a second grenade, which fell onto the floor of the boat. Although Nicky managed to jump off the boat in time, the boy didn't understand his demands to abandon ship. When Nicky surfaced after the grenade exploded, all that was left of the boy was his sandals, but Jack believed that the incident was a result of Nicky's distrust of the Vietnamese. His little brother was rushed into a helicopter for a psychiatric evaluation before he even managed to find the words to explain himself.

As a distraught, present-day Nicky explained to the Big Three after they returned to his trailer, he never got to tell Jack that the boy's death was an accident. Now knowing that Jack died more than 20 years ago, any guilt Nicky still had about the mistake has intensified, but Kevin's decision to return to him seems like we're due for the rest of the Pearsons to meet Jack's brother soon. Based on Kevin's silent support of Nicky, Randall clearly isn't the only family member who may love bringing new people home.

More like this
Here's How To Vote For The Next 'American Horror Story' Theme Among 6 Options
By Cianna Garrison
This Reported Update About HBO Max's 2021 'Friends' Reunion Is Great News
By Cianna Garrison
Is Meredith Actually Recovering On 'Grey's Anatomy'? She Finally Woke Up
By Abby Monteil
Stay up to date