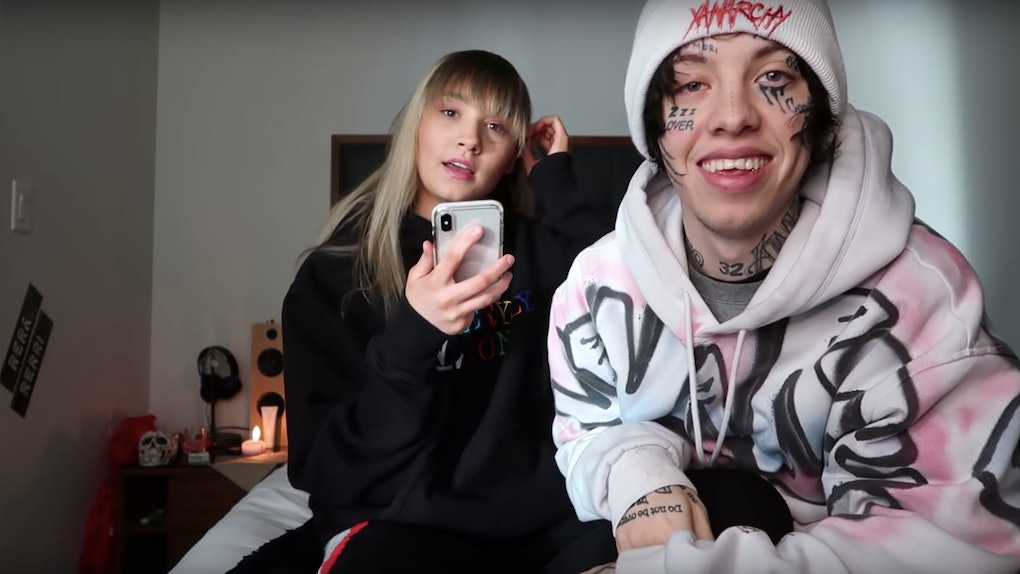 Since announcing their engagement and pregnancy, Lil Xan and Annie Smith have had their fair share of backlash from followers. From criticizing how quickly Lil Xan moved on with Annie after his breakup with Noah Cyrus, to fans accusing Annie of faking her ultrasound photos and her pregnancy all together, it's safe to say this couple has been through the ringer, and it looks like it's starting to affect their relationship. Lil Xan says he and Annie Smith are "in limbo" following her miscarriage, because he's not certain she was ever actually pregnant to begin with, he revealed.

"I hope, like, we're supposed to be getting some documentation from Kaiser Permanente, a hospital, but I was like I need the paperwork of the miscarriage that you had," Lil Xan said during an interview with No Jumper. "And then because I sent her — this is another suspicious thing — I was like, 'Go down to the hospital because it's on our street and get the paperwork that — same hospital she went to — get the paperwork saying you had a miscarriage,' but she came back saying, 'Oh I have to do this process and sh*t'," he explained. "So I was like, it really gets you thinking, you know what I mean? I want to give her the benefit of the doubt."

Lil Xan continued, saying not knowing whether or not Annie actually was pregnant upsets him because he doesn't know the truth. But while he may be having doubts about her honesty, Lil Xan said he still loves Annie, even though it's "complicated as f*ck," he continued. "We in limbo or some sh*t." As he and Annie are working to fix their relationship, Lil Xan said he's "holding back" from hooking up with other women, which he revealed he does often, though he won't tolerate Annie doing the same. "It's the biggest double standard," he admitted on the podcast.

His tendency to sleep with other women is part of the reason why he was excited to become a dad, Lil Xan said. He thought, "This is going to calm me down from f*ckin' b*tches... and living a crazy lifestyle." But he stressed that his infidelity doesn't make him "like a bad person," because Annie supposedly knows about it and he said she can leave at any time.

In response to all of this relationship drama, Annie posted a picture of Lil Xan on her Instagram story with a statement about them written over it. Her post read, "All I can say is love is hard. True, passionate, unconditional, eternal love will never be easy. Ever. Love sucks and it is the most beautiful, magical feeling in this world. Judging people via the internet about who they fall in love with and what they choose to do in their relationship is so sad because you can NEVER understand another couples relationship."

Then, she transitioned into talking about her relationship with Lil Xan, specifically. She continued, "This beautiful angel is the love of my life. My heart and soul. This morning when I woke up he just looked at me and said 'Annie you know you are the most incredible person I've ever met right? You know I would do anything for you and I promise to give you the world.' My eyes were barely open from sleep. This is true love. You can love us or hate us, but we have each other forever and that is all any person could ever dream of. A love like this."

Even though Lil Xan feels like he and Annie are "in limbo," it looks like she's ready to fight for their relationship, so who knows how long they'll be in this funk? For now, all we can do is wait and see what comes next for these two.