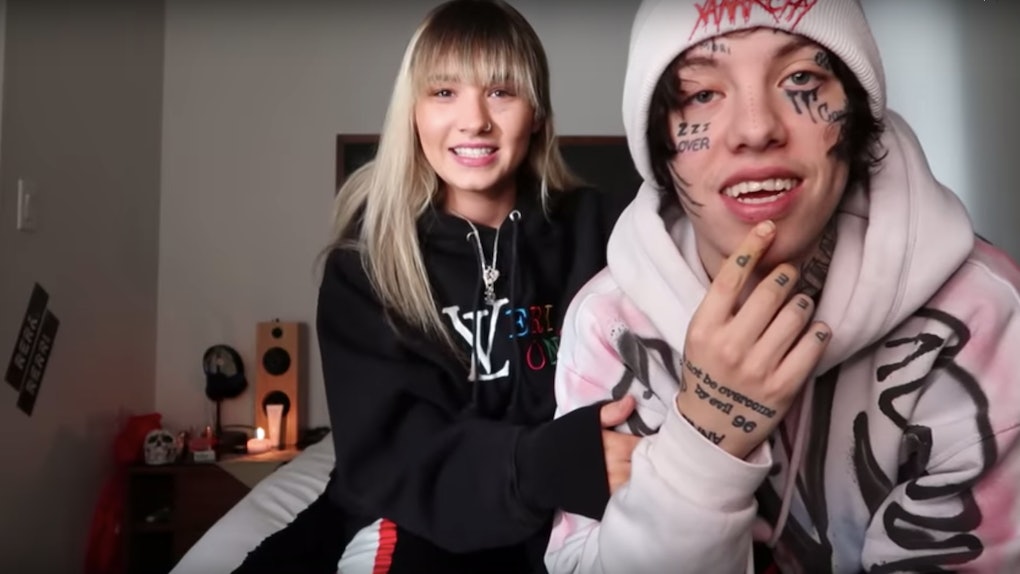 Since Lil Xan's relationship with Noah Cyrus went south in September 2018, the 22-year-old rapper has continued to make headlines, especially following the January 2019 announcement of his engagement to Annie Smith. In February, they announced they were expecting a baby together, but a recent comment he left on one of Annie's Instagram posts might confirm they took yet another step in their relationship. So, are Lil Xan and Annie Smith married? It's a little unclear, but here's what we do know.

On March 16, Annie posted a picture with Lil Xan in front of the Eiffel Tower in Paris, and captioned it, "my heaven on earth" — which led to a very flirty comment from Xan that said, "My beautiful wife ❤️ I love you 😘." Hello! Granted, "wife" could be used as a term of endearment, so he could've meant it as such, but they are engaged, and they are expecting, so what if it means they low-key tied the knot?

Whether or not Annie and Lil Xan have said "I do," their relationship seems like a strong one if their constant, supportive and heartfelt Instagram posts are any indication. The couple made their relationship official in November 2018, when Annie posted a picture with Lil Xan on Thanksgiving, expressing her gratitude for him. In her caption, she wrote, "God chooses people to come into your life to fulfill a purpose. your purpose in my life is to make me the best version of myself. i thank Him everyday for choosing you to be by my side in this life. you are my happiness, my most favorite person, my whole heart. thank you for sharing your life with me and allowing me to love you, always ♥️." Since then, they've posted one adorable picture after the other. (See: here, here, and OMG, here, too.)

When they announced Annie was pregnant, Lil Xan posted a picture of the two hugging on a balcony in downtown Los Angeles, telling the world that he was going to be a father. He wrote, "i wanted to wait but i just can’t leave my fans in the dark, it’s official im going to be a father 😭💔 i love you guys so much and hope you stay along for this crazy journey and i’ve never felt more happy in my life💔." Shortly after, they shared their first ultrasound photo on Annie's Youtube channel, but they were not well received. Fans insisted that the pregnancy was fake because the ultrasound photos seemed identical to ones you would easily find on Google. Annie was quick to shut them down in another Youtube video explaining that, yes, her pregnancy is real, thank you very much.

It sucks that celebrities have to deal with so much internet drama, and even more so when it's about pregnancy, which is such a personal subject that neither Annie nor Lil Xan really had to share with their followers. But it seems like they bounce back from hate with grace, and while there hasn't been any official confirmation that they're married, here's hoping they make it work in the long run. I, for one, can't wait to see photos of their baby!