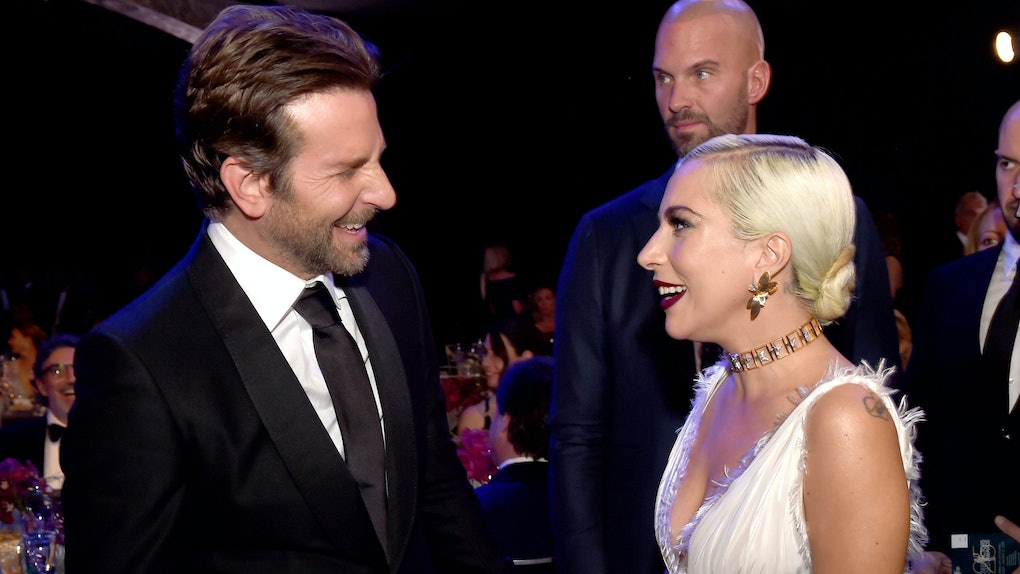 When A Star Is Born hit theaters in October 2018, the internet got plastered with opinions about Lady Gaga and Bradley Cooper, begging them to take their love offscreen even though they were both in relationships IRL. At the time, Gaga was engaged to Christian Carino, and Cooper had been dating long-time partner Irina Shayk (also the mother of his daughter). Now that both Gaga and Cooper are reportedly single, fans are convinced they're finally going to be ~A Thing~, but Lady Gaga reportedly isn't going to date Bradley Cooper, a source reportedly told Us Weekly. So, don't hold your breath.

According to the source, Gaga reportedly "felt bad" about the romance rumors surrounding her and Cooper, and added the singer "isn't going to get together" with him after his recent reported breakup with Shayk. Elite Daily has reached out to representatives for Lady Gaga for confirmation of these reports, but did not hear back by the time of publication. Though the actors have incredible chemistry, onscreen and off (and a source did reportedly tell PEOPLE that Cooper has a "huge and overwhelming connection" to Gaga), they've already said there's nothing romantic between them.

Most recently, at one of her Las Vegas shows, Gaga reportedly went on a rant after fans in the crowd reportedly kept asking her where Cooper was, The Mirror reported. Instead of ignoring them, she went on an "expletive-filled rant," according to the publication, and ended with, "And one more thing, be kind or f*ck off." That wasn't the first time she spoke out about her non-romantic chemistry with Cooper. During an appearance on Jimmy Kimmel Live in February 2019, Gaga set the record straight about their steamy performance of "Shallow'" at the Oscars. "People saw love, and guess what? That's what we wanted you to see," she said. "I'm an artist, and I guess we did a good job. Fooled ya!"

While Gaga and Cooper weren't actually involved, the rumors about a possible romance between them reportedly may have played a part in Cooper's split from Shayk. "The movie had a major impact on Bradley and Irina's relationship," another source reportedly told Us Weekly. "Even though there was nothing romantic between Bradley and Gaga, the noise was difficult for Irina to deal with." Cooper also reportedly became "emotionally absent" while filming A Star Is Born, a source told PEOPLE on June 10. "They tried to save the relationship [after filming ended,] but it had changed," the source added. Elite Daily has reached out to representatives for both Cooper and Shayk for confirmation on these reports, but did not hear back by the time of publication.

For the sake of their 2-year-old daughter, Lea De Seine, Cooper and Shayk are reportedly maintaining a civil relationship. They reunited on June 16 to celebrate Father's Day together, PEOPLE reported. A source told the publication Cooper and Shayk "were friendly." "It's clear that Bradley and Irina have the same goals for their daughter," another source added. "They are both wonderful parents." Despite the end of their long-term relationship, Cooper and Shayk seem to be on friendly terms, and honestly, good for them!

For all you Gaga-Cooper 'shippers out there, sorry to break it to you, but this is one fantasy that might not ever come to fruition. (At least not right now.) It might be time to find another celeb couple to get behind.