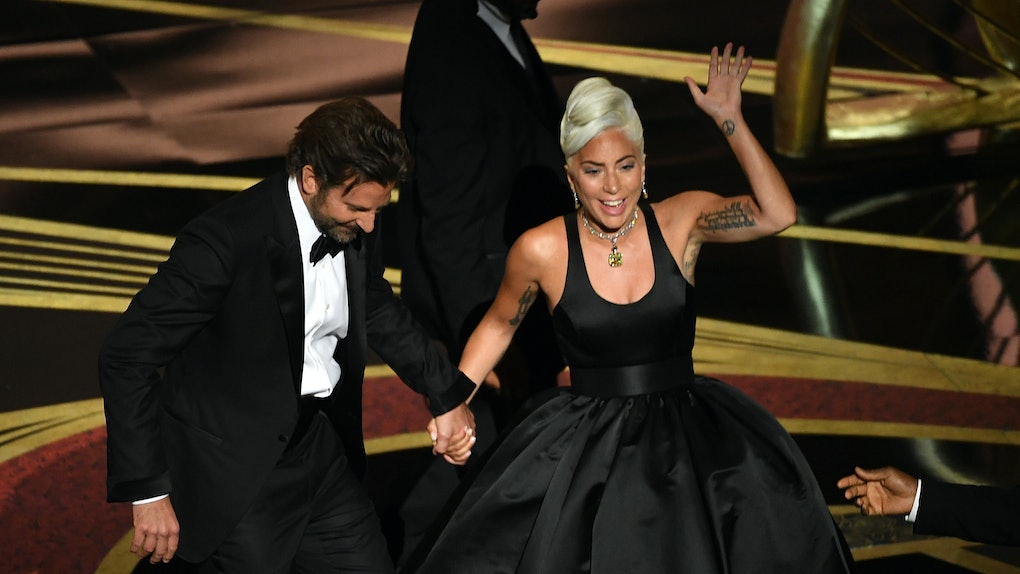 It's no secret that one of the greatest movies of 2018 was A Star Is Born. The chemistry between Lady Gaga and Bradley Cooper was so palpable, fans couldn't stop shipping them and making comments about how in love they seemed. This was, of course, impossible, considering Cooper was dating supermodel Irina Shayk, the mother of his daughter and his serious girlfriend of four years. Now that their relationship has reportedly come to an end, the tweets about Lady Gaga after Bradley Cooper and Irina Shayk's breakup are breaking the internet, and they all imply one thing: These two should get together.

Obviously, a breakup is a very real, intense thing, and the feelings of everyone involved are totally valid. This can't be an easy time for anyone. But, that doesn't mean that A Star Is Born shippers are going to stop imagining Cooper and Gaga finally getting together. After all, even they both know that they have undeniable chemistry. In an interview with Entertainment Weekly, the two were asked about their chemistry, and Cooper simply responded they felt it "From the moment [we met]." Nevertheless, on-screen chemistry does not mean that two actors are in love in real life. It just means they're d*mn good at their jobs.

During Cooper and Gaga's very intimate performance of "Shallow" at the Grammy Awards in February 2019, fans were freaking out at how up close and personal the two actors were getting. But when asked about it on Jimmy Kimmel Live!, Gaga told everyone to chill TF out. "People saw love, and guess what? That's what we wanted you to see," she said. "I'm an artist, and I guess we did a good job, and, fooled ya!"

Fooled us, indeed, which is why the news of Bradley and Shayk's breakup comes as a bit of a surprise. PEOPLE confirmed the news on June 6, and Elite Daily has reached out to representatives for Cooper and Shayk but did not hear back by the time of publication.

Now that Cooper is reportedly a single man, and Gaga ended her engagement to Cristian Carino, fans can't stop imagining all the possibilities that come with a real-life relationship between these two talents. Here are all the shadiest tweets about the breakup:

1. This might be a bit dramatic, but fans can dream, right?

3. Honestly, it feels like a long time coming for shippers.

5. This one is highly doubtful, but still, LOL.

Sing it with me now: We're far from the shallow nowwwww!

9. That Oscar's performance though...

"I love her so deeply,” Cooper told TIME. "It’s because we were at our most vulnerable together."

16. There's a "The Office" meme for everything.

Not likely, but still hilarious.

At the end of the day, a relationship came to an end for reasons the world may never know, and quite frankly, doesn't have to. What happens in a relationship (celebrity or otherwise) is between the people in it, and to imply that it has anything to do with Gaga is unfair. No matter what kind of connection the two had while filming ASIB, the one thing we know for sure is that Gaga and Cooper are two talented actors, and their love for each other, while real, is purely platonic.

Whatever happens, it's worth repeating: We are far from the shallow now, folks.