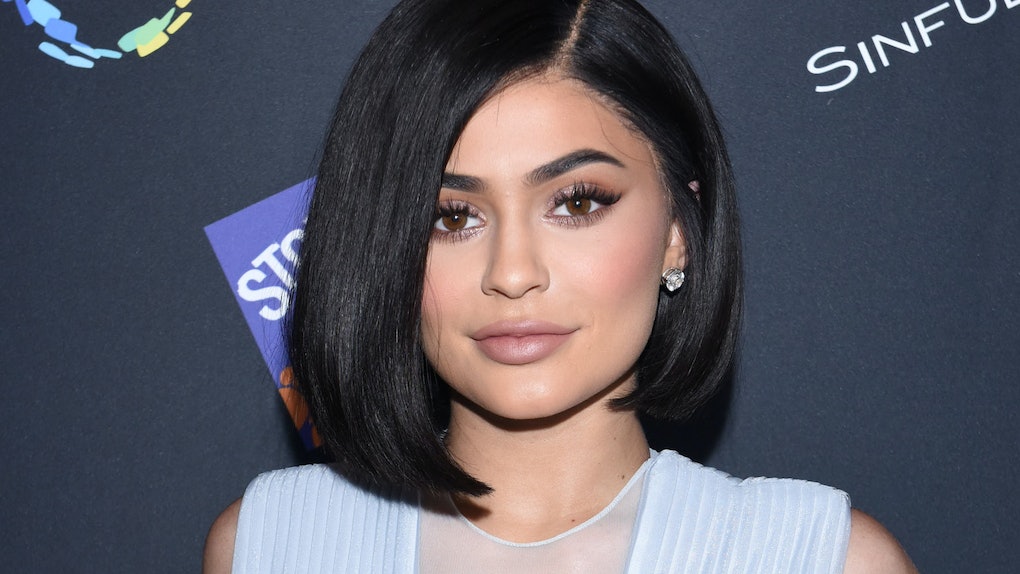 It's already been three months since we learned Kylie Jenner actually was pregnant during her social media hiatus. Can you believe?! Jenner announced the birth of little Stormi Webster on Sunday, Feb. 4, revealing she was born three days before on Feb. 1. That made Tuesday, May 1, Stormi's 3-month birthday! Her mom posted a photo of her to commemorate it, naturally, and Kylie Jenner's photo of Stormi Webster at 3 months old is just the cutest little thing.

Kylie Jenner, Travis Scott, and Stormi are currently on a vacation to Turks and Caicos, where Kim Kardashian and Kourtney Kardashian took their kiddos just a few weeks prior. Jenner posted a couple of photos from the vacation to her Instagram on May 1, and one of those photos included a pic of a sleepy Stormi lounging on a yacht. (Stormi's life is already so much more interesting than mine, JFC.) The baby's laying next to Scott, and Jenner captioned the post "my pretty girl is 3 months old today." The other photos Jenner posted showed her and Scott on a beach, her and Scott lounging on the yacht, and one of just Jenner walking down a set of stairs on the yacht (say yacht one more time) captioned, "MIA."

Will you just look at this little nugget!

Kim Kardashian interviewed Kylie Jenner for Evening Standard magazine, which was also published on May 1. In the interview, Kardashian and Jenner talk about being mothers (their daughters were born just two weeks apart), Jenner's career, and of course, Stormi. Kardashian asked how Jenner and Scott settled on the name Stormi. As it turns out, the original name idea was Storm, but Jenner said that just didn't click. "I really don’t know how we thought of Storm," Jenner responded. She continued,

Her dad insisted it was him, but I feel like it was me. And that kind of just stuck with us. And then I didn’t really like just Storm — I didn’t feel like that was her name. So then it became Stormi. And it just stuck.

Jenner also said that Stormi wasn't even her favorite name out of all the ones she thought of, but it was just the right one. "I feel like there were a lot of other names that I might have even liked better to be honest," she said, "but I feel like Stormi picked her own name, like it was just her name."

Jenner's photos from her Turks and Caicos vacation with Stormi and Travis Scott are making me want to drop all of my money on a cruise like, right this instant.

It looks like she's about to throw her phone overboard here. Stop!! There are still so many pictures of Stormi we haven't seen yet!!

Is this an ad, or just Kylie Jenner's life? Don't answer that.

In her interview with Kardashian for Evening Standard, Jenner also talked about the closeness in age between Chicago West and Stormi Webster. Kardashian said, "Our daughters are two weeks apart, so that’s really cute, and they’re like best friends." "[Stormi and Chi] hang out all the time," Jenner said, continuing,

It’s crazy how fast they grow, because Chi is just, like, two weeks older, but you can tell she’s a little bit more advanced. And then, right when Stormi hits two weeks, she’s doing the same things Chi was doing, and they’re like… it’s just crazy to see them grow up together.

It's definitely wild to think that it's already been three months since Chicago West and Stormi Webster were born. (Chicago West was born on Jan. 15, 2018, and Stormi was born two weeks later on Feb. 1.) Their cousin, True Thompson, was born on April 12, 2018, and hasn't made her photographic debut to the world just yet, but Khloé Kardashian will hopefully reveal her baby girl soon so we can all start swooning over our new favorite Kardashian family trio.