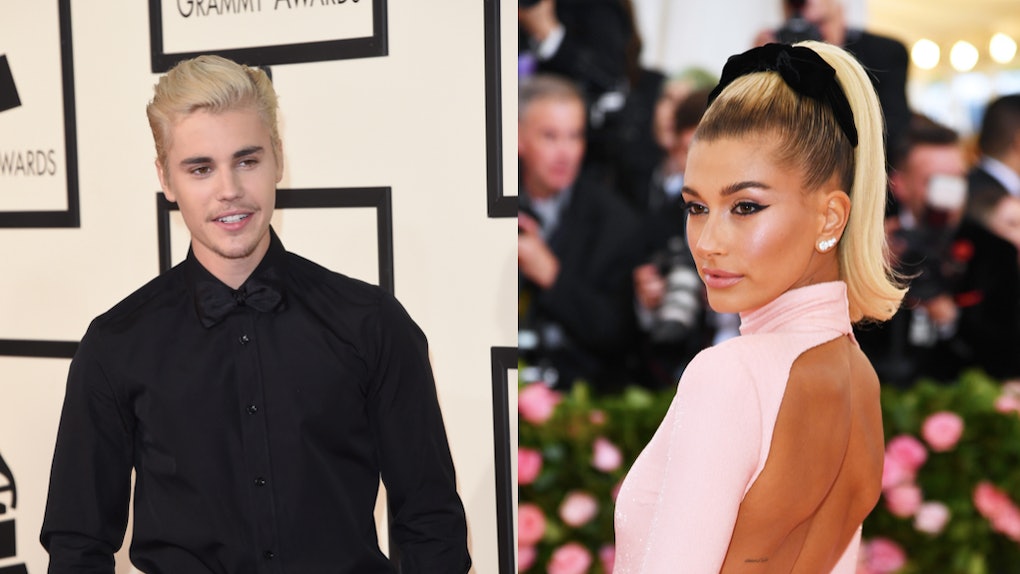 Justin Bieber's Pet Name For Hailey Baldwin On Instagram Is Just So, So Much

Justin Bieber and Hailey Baldwin have been a married couple for almost nine months now, and their public declarations of love have only gotten cuter. Safe to say, the Bieber's are very much in the honeymoon phase of their relationship, and they're not slowing down. After Baldwin walked the Met Gala pink carpet in a pink, backless Alexander Wang dress, Bieber posted a photo of her to his Instagram story, and um... let's just say Justin Bieber's pet name for Hailey Baldwin on Instagram was interesting.

I'll be the first to say that I love pet names. They're usually so cute, and can sometimes really give you insight to the couple's dynamic. But Bieber's pet name for Baldwin on his Instagram story was so much... captioning the photo, "Stunning Goo Goo." Um, I'm not entirely sure what "Goo Goo" means, besides the sound you make when trying to imitate a baby, but hey, if it works for them, then it works for them, right? Right?!

This year, Baldwin walked the Met Gala carpet alone, and while it would've been great to see Bieber alongside her, she was more than OK without him there.

"Goo Goo" is just one of the many pet names Bieber and Baldwin have called each other. Over the course of their relationship, they've posted pictures on Instagram with the pet names, "bubba," "bean," and "Hunny buns punkin," to name a few.

While their pet names certainly show the love they have for each other, Bieber and Baldwin also show their love with romantic Instagram shoutouts to each other on the reg. On April 17, Baldwin posted a picture of Bieber in what looked like a studio, with a sweet caption that read, "my love 😩😍😍 you are an incredible man, you make me a better human being, you make me happier than I’ve ever been. Insanely proud of who you are and who you’re becoming.. I love you more every single day." Definitely swoon-worthy.

On April 8, Bieber posted a picture of Baldwin in Paris and wrote her a whole poem in the caption. Was it Shakespearean-level prose? No, but it felt sincere. He started, "Sunlight falls into the Abyss, Just like i fall into your lips, Waves crash onto the shore, My love for you grows more and more, Sound of the crickets a true meditation, I think about you, Gods greatest creation. As i fall into this blissful state I ponder on how you’re my one true SOULMATE."

He continued by talking about how he's seeing stars and how grateful he is for his faith. It was a lot. Cute, but a lot.

Needless to say, Bieber and Baldwin's pet names for each other on Instagram aren't the only ways they express their love. These two were one of the most whirlwind romances of 2018, and they've been open and honest about having to work at their marriage, but they seem genuinely happy together. If they want to call each other "Goo Goo" and "Hunny buns punkin," then save me a seat in the front row!