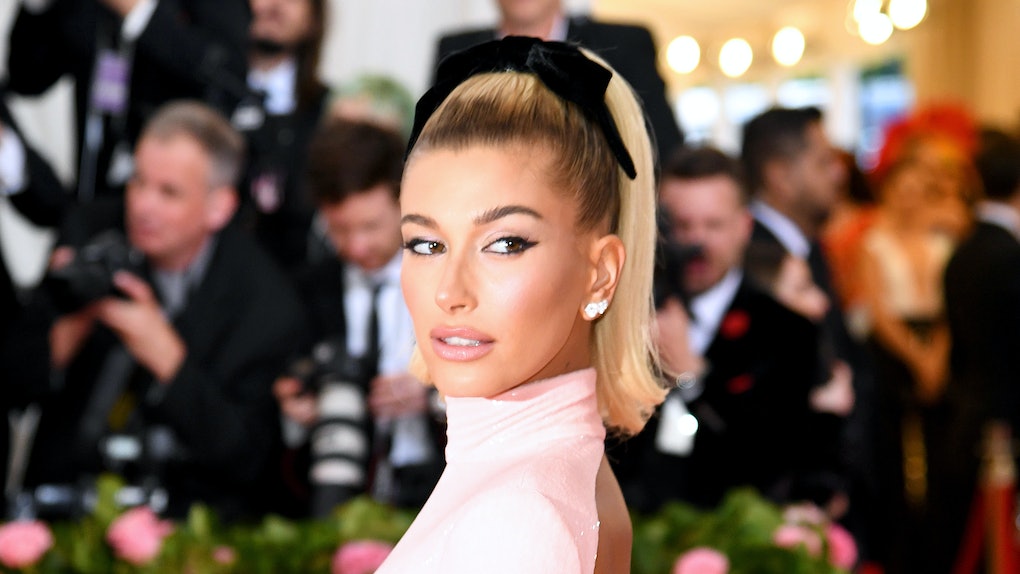 It's the fashion industry's biggest night of the year, as celebrities from all over the world descend upon the Metropolitan Museum of Art to show off their sartorial works of art at the Met Gala. This year's theme is "Camp: Notes on Fashion," and the entire A-list made it out to show off their most over-the-top looks. Model Hailey Baldwin has been a mainstay at the Met Ball since she first attended in 2015, but why isn't Justin Bieber at the 2019 Meg Gala with her? The newlyweds didn't make it out together, and instead Baldwin walked the Met Gala's pink carpet with designer Alexander Wang as her date.

Although Bieber and Baldwin got married in September 2018, they haven't made a red carpet appearance together yet. The 2019 Met Gala would have marked their first time walking a red carpet as husband and wife. But, unfortunately fans will have to wait a little bit longer to see them make their public debut.

In April, Baldwin spoke to Refinery29 about her plans for this year's gala. At the time, she was bouncing around some pretty playful ideas for her look. She said:

Her actual look was far off from a camping vibe, since she showed up in a sleek Alexander Wang pale pink gown. Of course, she gave a little nod to the theme of camp with an over-the-top flash of a bedazzled whale-tail thong. But where was her hubby?

It's not super shocking that Bieber didn't walk the carpet. In 2016, he explained that he's not that into award shows in general, so fans rarely expect to see him walking the red carpet.

While Baldwin was getting ready for the Gala, Bieber was busy having a far less glamorous night. He posted a video to his Instagram story showing him enjoying a takeout dinner.

Bieber isn't just hanging out at home, though. The singer has been dropping hints that he and Ed Sheeran are releasing a collaboration later this week. On May 1, Bieber posted a side-by-side photo of Sheeran and himself with the number "10" as the caption, leading many fans to speculate that he was revealing a release date. On Monday, the same day as the Meg Gala, Bieber posted a video on Sheeran with a laptop, along with footage and audio of an untitled track. Sheeran is tagged in the video, and the word "Friday" is plastered across the shot. Basically, it's all making it very clear that something big is coming from Bieber and Sheeran on Friday.

It all makes sense that Bieber didn't have the time or energy to walk the Gala's pink carpet while he's also prepping for a big new song release. Even still, it would have been a treat for fans to see the couple make an appearance together. The last time Bieber attended the Met Gala was in 2015 with then-girlfriend Selena Gomez, and Baldwin attended last year with Shawn Mendes. Maybe in 2020 fans will get to see the Baldwin-Biebers finally walk the Met Gala red carpet together.