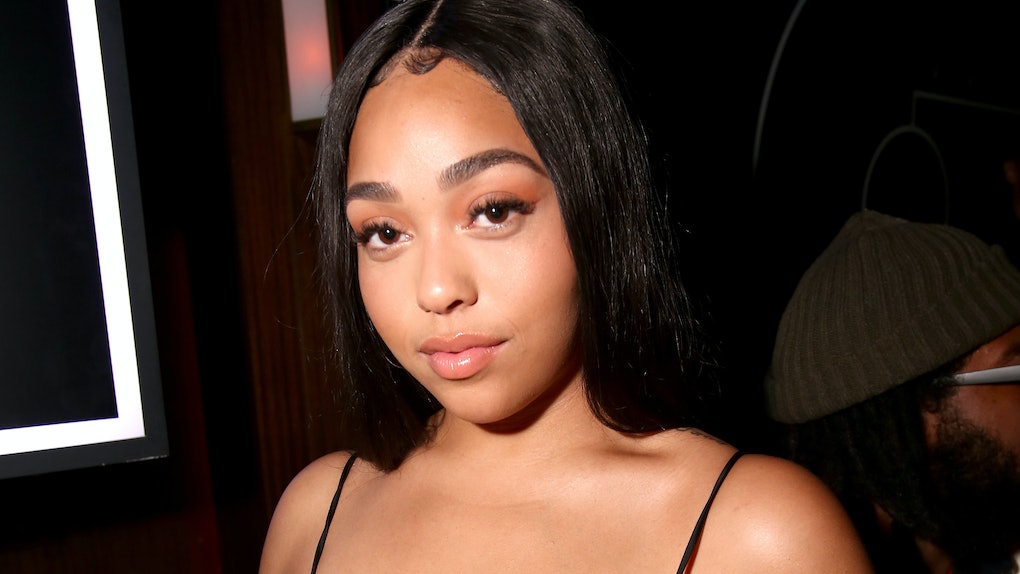 Since her name has been in the news a lot lately, you might be wondering more about Jordyn Woods' dating history. After TMZ reported that Tristan Thompson allegedly cheated on Khloé Kardashian with Woods, new deets, shifting stories, memes, and general chaos have splashed across our feeds and timelines. Elite Daily previously reached out to reps for Woods and Thompson for comment on the rumored hookup, but did not hear back by the time of publication.

A key thing to know about Woods: Apart from the coveted title of Kylie Jenner's BFF, Woods is also a model and fashion and beauty influencer. Woods has been in campaigns for Express, Boohoo, and Barneys New York. She's collaborated with Kylie Cosmetics. (Although, there's a strong chance those sweet Kardashian money days are over.) Woods has also done a makeup collaboration with Too Faced. And last but not least, Woods launched a size-inclusive activewear line SECNDNTRE last year. It follows, then, that the men Woods has reportedly dated would be fit for a boss b*tch model, designer, and beauty guru as far as status goes.

While Woods hasn't publicly claimed any of these men as her partners — Elite Daily reached out to a rep for Woods for comment on these three and didn't hear back by the time of publication — these are each people Woods have hung out with or gone on dates with that made fans take note. Here's some freshly brewed tea on Woods' dating history.

On May 31, 2018, Kendall Jenner and Woods were spotted on a possible double date at The Nice Guy in West Hollywood, CA. Jenner was with her rumored bae at the time, Phoenix 76ers point guard Ben Simmons, though they've never commented publicly on their rumored relationship. Woods was reportedly there on a date with Devin Booker, who is a Phoenix Suns shooting guard. There aren't many good pictures of them together, but there is paparazzi footage of the two arriving at The Nice Guy. While it seemed like a one-off date and casual pairing, sources confirmed to Us Weekly that Woods and Booker split up just before the alleged Thompson incident in mid-February.

When Woods posted a picture of her and Jaden Smith to Instagram on Feb. 18, 2018, rumors that the two were dating began to fly. Smith has been in Jenner's inner circle almost as long as Woods has. The two have long been in the public eye together as long-time pals, a rumored couple, and friends on the rocks. (Smith caused a ruckus when he released his song "Fast," which was reportedly about Jenner and a strained relationship with her; Elite Daily has reached out to Smith's reps for comment and has not heard back in time for publication. And in 2015, sources told E! News that Smith and Jenner's rekindled friendship was part of the reason Tyga broke up with Jenner, but no one publicly confirmed or denied that rumor.) But just like with Booker, nothing concrete was seen or heard about Smith after the initial dating rumor buzz.

Speaking of splits, The Daily Mail reported on April 3, 2018 that Woods and Chris Brown had gone bowling together. There are no pictures of them together on this night — just separate, grainy paparazzi shots of Woods, Brown, and, randomly, French Montana outside Pinz Bowling in Studio City, CA. The only clue is a twinning picture of Woods bowling taken by photographer Kevin Wong, who also took Brown's bowling flick, on Woods' Instagram. Outlets such as Hollywood Life and Hot New Hip-Hop hinted at a possible romance blooming between the two, but fans didn't hear anything about the two dating after this roll down the lanes, and Woods and Brown never commented on it.

It's intriguing that for someone whose career was jumpstarted by social media, Woods truly keeps the romantic part of her life under wraps. Save for the Friday, March 1st, upcoming, tell-all Red Table Talk with Woods, it seems like fans will have to look very closely for clues about who's in Woods' heart.

More like this
Are Demi Lovato & Noah Cyrus Dating? They're Reportedly "Hanging Out"
By Joyann Jeffrey
Clare Crawley's Tweet About Matt James Reportedly Dating Grace Amerling Is Shady
By Candice Jalili
Who Is Ella Emhoff Dating? She's Reportedly Hanging Out With A 'GQ' Editor
By Corinne Sullivan
Stay up to date