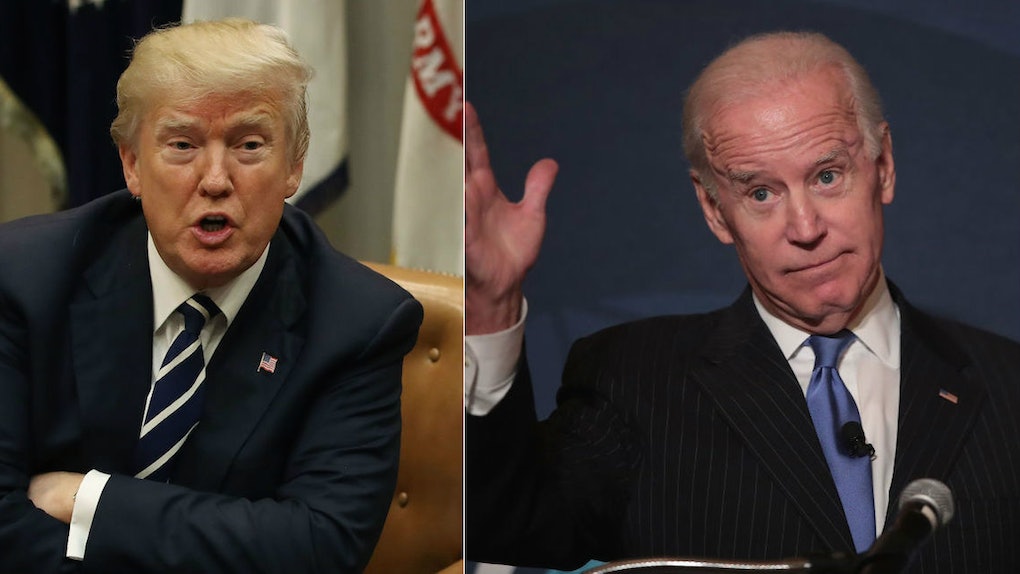 Not even two weeks into it, 2018 already feels interminable. This is thanks in large part to the incendiary comments the president insists on making, apparently to waste the country's time in disbelief, rage, and arguments. The latest such reported comment includes the term "sh*thole," and based on Joe Biden's tweet about Donald Trump's immigration quote, the former vice president is none too pleased with that kind of language.

This was prompted by a report from The Washington Post that was published on Thursday, Jan. 11. The report by Josh Dawsey alleges that Trump referred to Haiti, El Salvador, and African countries as "sh*thole countries" during a meeting about immigration. Trump reportedly asked why the U.S. is accepting immigrants from those "sh*thole countries," saying immigrants from, say, Norway would be better.

In a tweet sent on Friday morning, Trump denied using that term, saying, "The language used by me at the DACA meeting was tough, but this was not the language used." Illinois Senator Dick Durbin, who was in the meeting, however, claimed that Trump did, in fact, use that language.

"In the course of [Trump's] comments, he said things that were hate-filled, vile and racist," Durbin told reporters on Friday, according to USA Today. "I cannot believe that in the history of the White House and that Oval Office any president has ever spoken the words that I personally heard our president speak yesterday."

It appears as if former Vice President Biden has similarly strong feelings about the language Trump reportedly used while discussing immigrants on Thursday. It should be noted that Biden is not exactly known for using the cleanest language himself, so it's probably less the "sh*thole" that's bothering him and more the context for it.

As a Democrat, Biden has been generally progressive when it comes to immigration. The Thursday meeting where Trump supposedly used that language was supposed to be about the Deferred Action for Childhood Arrivals (DACA) program. DACA was introduced in the Obama era and protects young immigrants who came to the United States illegally, known as Dreamers. It allows these people to work and go to school. Trump announced this past fall that he is ending it, and Congress is working on figuring out a policy to handle the hundreds of thousands of Dreamers in the country.

"You know, 11 million people live in the shadows," Biden said in 2014 to the U.S. Hispanic Chamber of Commerce. "I believe they're already American citizens."

Biden supported immigration reform that would grant more protections to Dreamers. Referencing the benefits these people bring to America, Biden said in 2014, "We should be stapling a green card to each one of those degrees as they walk across the stage."

This is far from the first time that Biden has come out against Trump. In June 2017, Biden targeted Trump's inaction on protecting the LGBTQ+ community. In early January 2018, Biden said he was "disappointed" in how Trump was speaking (well, tweeting) about North Korea. In the weeks before Trump's inauguration in January 2017, Biden advised Trump to "grow up."

That paled in comparison to how Biden spoke about Trump during the 2016 presidential election. In October 2016, following the release of the infamous Access Hollywood tape, Biden said he wished "we were in high school and I could take him behind the gym." Clearly, Biden was showing restraint in his most recent tweet.