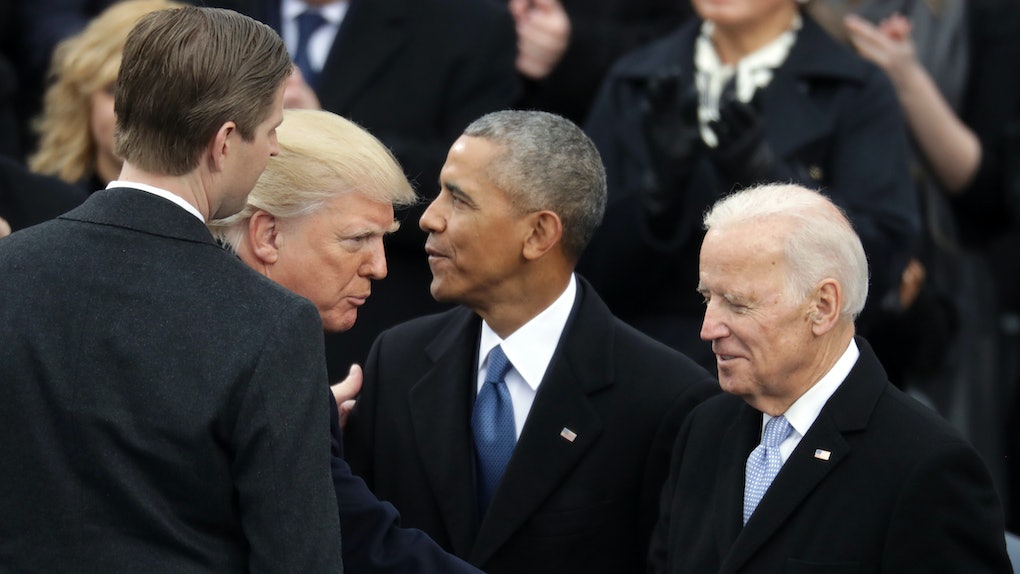 It's no secret that Vice President Joe Biden isn't a fan of President Donald Trump. Since Trump claimed the presidency in 2016, Biden has criticized the president multiple times, taking aim at his comments and strongly rebuking some of his policies. If you somehow missed it or maybe just want a refresher, let's take a look at a few of Joe Biden's quotes about Trump. They might convince you that these two will never be cordial.

It's a shame, too, because Biden appears to have much friendlier relationships with other presidents, whether they shared a political party or no. He's laughed with President Jimmy Carter, shared moments with President George H.W. Bush and developed a full-blown bromance with President Barack Obama. I mean, he and Obama are seemingly so cool that they tend to grab lunch together, trade jokes with each other, and spread warm words and praise for each other.

It's nothing like the relationship (or lack thereof) that he has with Trump. Things have gotten so heated between these two at times that Biden has appeared to be ready to go to blows. And it seems likely that things will get worse on the campaign trail now that he's a 2020 contender.

For now, though, check out some of his past statements about the president:

So, nobody was really happy with Trump's infamous p*ssy-grabbing comment, for which Trump later apologized, but Biden especially took issue with it. While speaking at an anti-sexual assault rally at the University of Miami on March 20, 2018, the former vice president slammed Trump, saying he would have "beat the hell out of" the commander-in-chief if they'd gone to high school together.

"A guy who ended up becoming our national leader said, 'I can grab a woman anywhere and she likes it,'" Biden said. "They asked me if I’d like to debate this gentleman, and I said 'no.' I said, 'If we were in high school, I’d take him behind the gym and beat the hell out of him.'" Biden later said he regretted the remarks, telling the podcast Pod Save America that “I shouldn’t have said what I said.”

Elite Daily reached out to the White House for comment on the remarks, but did not immediately hear back. Representatives for Biden also did not return Elite Daily's request for additional comment by the time of publication.

According to USA Today, Biden called Trump a "tragedy in two acts" in a speech to union workers on April 5 because of the way Trump "characterizes people and is consumed with personal grievances." What he said afterwards wasn't so nice, either.

Is Trump Serious? He Can't Be Serious...

In February 2018, Biden flat-out called Trump a "joke," according to People. His comment was in response to Trump reportedly calling Democrats who didn't clap during his State of the Union "treasonous."

And he didn't stop there. Biden followed up saying that he “marvels at some of the things [Trump] says and does.”

This Is Obama's Country — Trump Just Inherited It

To let Biden tell it, Trump inherited the economic success he loves to take credit for from President Barack Obama, and is actually close to ruining it. While speaking about the economy at a rally on May 18 in Philadelphia, the former vice president said:

Needless to say, Trump probably didn't like that one, but Biden may have been on to something. While there have definitely been some positive jobs numbers and economic indicators during Trump's presidency, NBC News said in a 2018 report that Trump did not pull off an economic turnaround because the economy "absolutely [was] not" struggling when he took control over the country. "Trump inherited a booming economy with low unemployment and steady job growth," the report reads. The report goes on to say that there has been consistent growth in the past 10 years, all thanks to Obama. "The bulk of that decade of growth was under Obama’s presidency, and can fairly be credited to him," the report continues.

Trump Should Step His Credentials Up

Yeah, Biden laid it on thick with this one. During a campaign stop in August 2016 with then-Democratic nominee Hillary Clinton, the vice president let loose on Trump, saying, "This man is totally, thoroughly unqualified to be president of the United States of America.”

He continued to say that Trump's "cynicism is unbounded" and that Trump "doesn't care" about the middle class, according to The Huffington Post.

And, like I said, his comments may worsen once the election cycle really kicks off. Stay tuned.