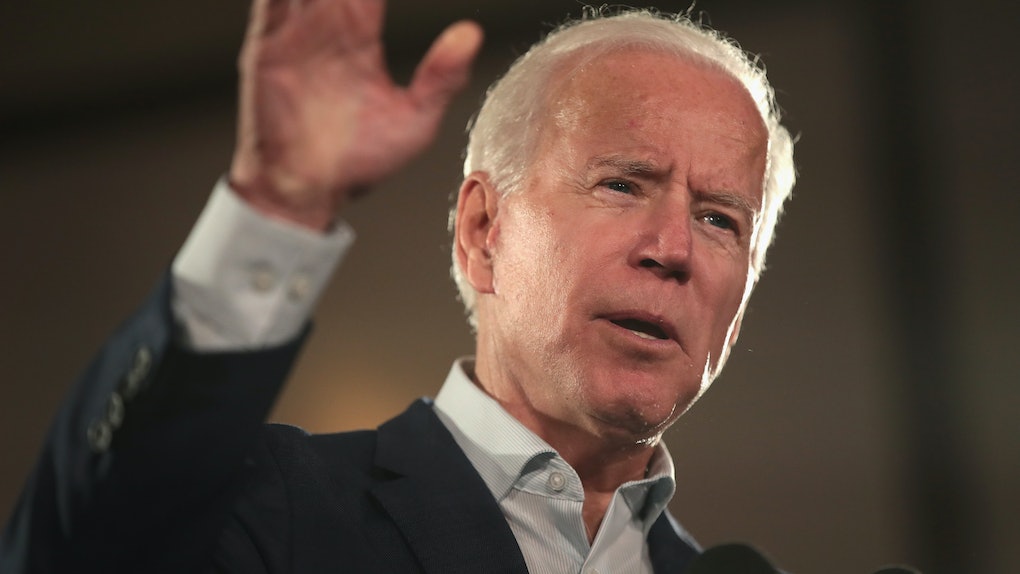 You likely knew this was coming, and you were just waiting on the confirmation. I'm talking about Joe Biden running for the White House, guys. On Thursday, April 25, the former vice president announced he is entering the 2020 race. Leaving no question about what his motives are, Joe Biden's 2020 presidential campaign announcement calls the upcoming election a "fight for the soul of a nation."

In an almost three and a half minute video on the Joe Biden 2020 YouTube channel posted on Thursday, Biden announced he is throwing his hat in the ring for 2020 with the help of some pretty powerful images. Revisiting one of the more tense times in the country, Biden talked about the white supremacist rally in Charlottesville, Virginia, in August 2017 that resulted in the death of Heather Heyer, who was protesting the white nationalists. Facing this crisis during his first year in office, President Donald Trump famously uttered a line during his speech about the rally that pitted white supremacists protesting the removal of Confederate statues against protesters standing up against racism. After placing blame on "both sides," the president said in reference to the white nationalists, "You had some very bad people in that group. But you also had people that were very fine people, on both sides."

In his announcement video, Biden pushed back and said Trump's comments "assigned a moral equivalence between those spreading hate and those with the courage to stand against it." He refers to that time as the moment he knew "we are in the battle for the soul of this nation," and Biden warns giving Donald Trump another four years in office will "forever and fundamentally alter the character of this nation."

His announcement comes after Biden fueled speculation of a potential run at a Jan. 28 event called “An Evening with Vice President Joe Biden.” During a question-and-answer segment, the politician said he was “a lot closer” to deciding to take on President Trump in 2020 and plans to make “the decision soon," per Politico. "I’m a lot closer than I was before Christmas and we’ll make the decision soon," Biden added.

Around Christmas 2018, Biden made comments that suggested he was considering tossing his hat in the ring for the White House, but expressed some hesitancy. While speaking at an event on his book tour, he boasted about his ability to do the job, saying, per the Missoula Current, "I’m the most qualified person in the country to be president. The issues that we face as a country today are the issues that I’ve worked on my whole life — the plight of the middle class and foreign policy." However, he said that he and his family needed to figure out "whether we’re ready" for a presidential campaign.

With Thursday's announcement, that answer is clear. Biden is running for president, and he's not holding back any criticism of the current occupant of the office.