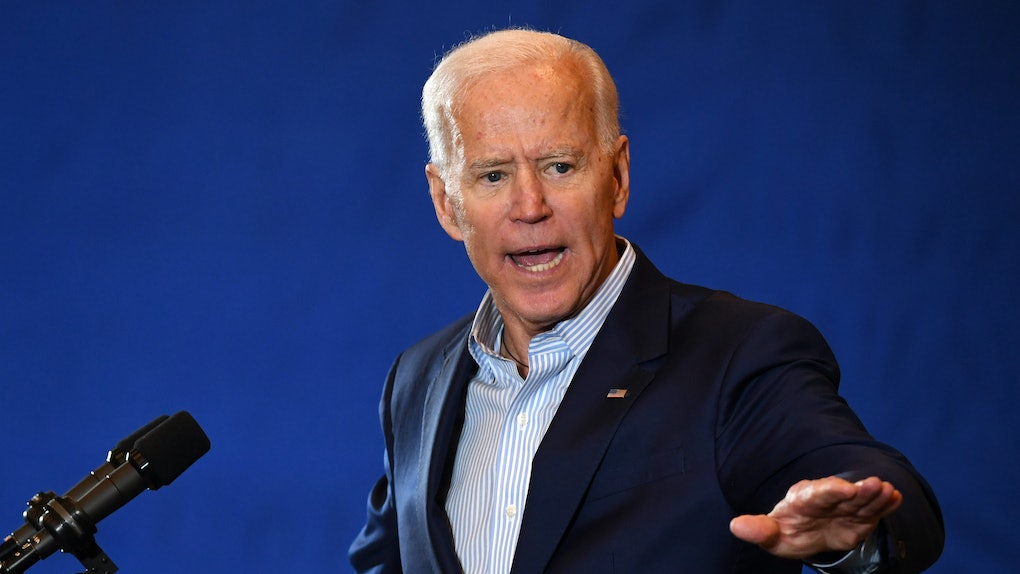 Since the earliest days of his presidency, President Donald Trump has claimed responsibility for everything from stock market gains to unemployment rates — even when reports have shown that the economic boom started under President Barack Obama. While many people leave Trump and his claims be, Joe Biden is speaking out about it, and he's not holding back. Joe Biden's response to Donald Trump's economic talking points gives all of the credit to Barack Obama, and I can't get over how bold that is.

Biden sounded off on Trump during a speech at his rally on Saturday, May 18 in Philadelphia, Pennsylvania. Responding to claims made by Republicans regarding economic achievements during Trump's tenure, Biden said it was actually Obama who saved the United States from a recession and passed on a strong economy to Trump.

According to The Philadelphia Inquirer, Biden said:

Elite Daily reached out to the White House for comment on Biden's remarks, but did not hear back at the time of publication.

Wow. So, Biden clearly didn't hold back on that one — and he may be on to something. While Trump's tenure thus far has definitely seen positive jobs numbers and economic indicators, a September 2018 report from NBC News says Trump did not pull off an economic turnaround because the economy "absolutely [was] not" struggling when he took control over the country. "Trump inherited a booming economy with low unemployment and steady job growth," the report reads. The report goes on to say that there has been consistent growth in the past 10 years, all due to the former commander in chief. "The bulk of that decade of growth was under Obama’s presidency, and can fairly be credited to him," as stated in the report.

Even Obama and Trump have gone back and forth over this. Back in September 2018, Obama maintained that he should be credited for the state of the country while speaking at the University of Illinois.

"When you hear how great the economy is doing right now, let's just remember when this recovery started," he said, per NBC News. He continued:

I'm glad it's continued, but when you hear about this economic miracle that's been going on, when the job numbers come out, monthly job numbers, suddenly Republicans are saying it's a miracle. I have to kind of remind them, actually, those job numbers are the same as they were in 2015 and 2016.

Meanwhile, Trump has made multiple claims that the U.S. economy is the best it's been — a claim that has been proven false by fact-checkers.

"The Economy is soooo good, perhaps the best in our country’s history," tweeted Trump in September 2018.

While reports agree unemployment numbers under Trump are very good, they also show that periods in the early '50s and late '60s actually touted slightly lower unemployment figures, along with pointing out that the unemployment rate began steadily falling under Obama's tenure.

In a tweet from April 2019, he even seemed to suggest he should be immune from criticism, as presidents supposedly were in the "old days" because of how strong the economy is.

While that might sound like a reach, his confidence is, at the very least, pretty commendable. As for avoiding criticism, it seems pretty clear that as long as Biden is on the campaign trail, Trump might want to steel himself for pushback on one of his go-to talking points.

More like this
These Tweets & Memes About Matt Gaetz's Venmo All Make The Same Joke
By Cianna Garrison
The More Contagious B-117 COVID Variant Is Now The Most Common Strain In The U.S.
By Rhyma Castillo
General Mills' 'Ghostbusters' Cereal Is A Fruity Bite With The Cutest Ghost Shapes
By Daffany Chan
Stay up to date