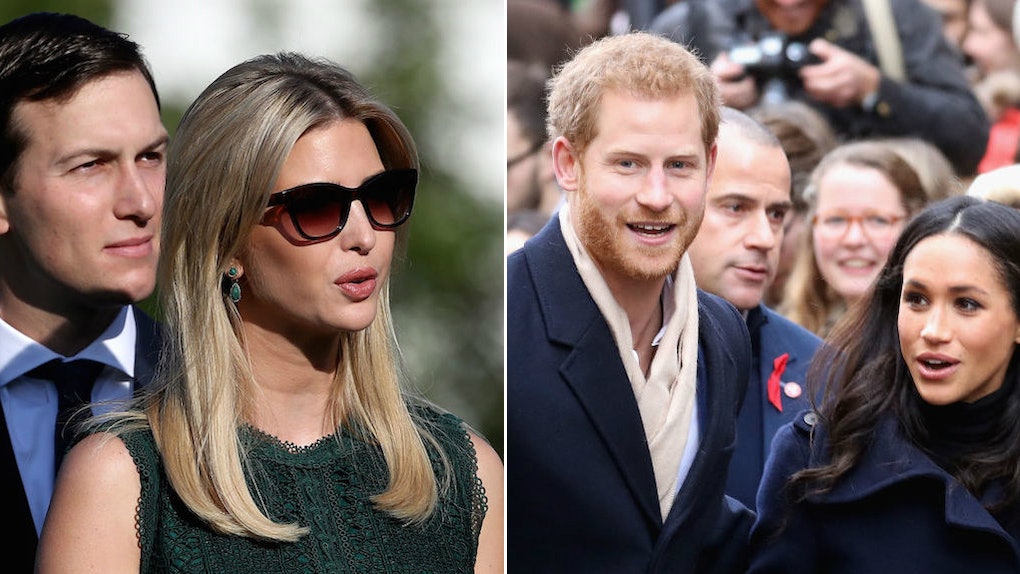 President Donald Trump's daughter endured another round of backlash on Friday, Dec. 15. An attempt to celebrate love was shot down when Ivanka Trump's tweet to Meghan Markle and Prince Harry got called out on Twitter. Users overwhelmingly claimed the first daughter was trying to buy herself a ticket to the wedding, though it wasn't clear what she meant by it, Twitter wasn't having it.

"Wishing Meghan and Prince Harry a lifetime of love, laughter and happiness together," wrote Trump on Twitter. "I have no doubt that this couple will do extraordinary things, both individually and collectively. Congratulations!"

The pair of congratulatory tweets came just after the British royal family announced the couple's wedding date, which is set for May 19, 2018 at Windsor Castle. Meghan Markle, the biracial American actress and humanitarian, announced her engagement to Prince Harry of Britain on Nov. 27, confirming rumors that the couple was going to tie the knot soon. The couple had kept their relationship under wraps for months, but they'd been dating since summer 2016, and apparently met on a blind date set up by a mutual friend, according to Town & Country. The widely-anticipated engagement received congratulations by people from around the world.

But Trump is getting trolled for her well-wishes. Many people have speculated that she was publicly expressing her congratulations to the couple in order to fish for an invite to the wedding.

"Dear Kremlin Barbie: still not getting an invite," tweeted one user.

"Aww how sweet but I don’t think y’all are gonna get invited," said another user.

Let's be clear: All we know for sure is that Trump sent a message of well-wishes to the happy couple.

It's all speculation as to whether she had any angle with it or simply meant to congratulate them. As Newsweek points out, the fact that Trump sent a public congrats at all might get on her father's nerves, as it's no secret that Prince Harry is chums with Obama.

And to be fair, lots of celebrities have wished the two a happy marriage. Former President Barack Obama also congratulated the couple on their engagement, along with a host of other big names on the international stage. But Trump has come under fire for her congratulations while others didn't. The reason for that may be simply her affiliations.

It appears that some people trolling Trump were assuming that the first family wouldn't be invited to the wedding. It's not clear whether the Trumps will in fact be on the guest list, and the question of whether to include them poses a dilemma for the royal family (including a question of finances — Trump's attendance could raise security costs). The Trump family name carries particular weight in the world leadership circle these days, so it's not hard to imagine they won't get an invite. Though they wouldn't be the first; Obama didn't attend Prince William's wedding to Kate Middleton.

"Meghan and Prince Harry, all rational Americans, as well as every person throughout the rest of the world, see your family as this," wrote one user on Twitter, sharing a photo of people waving a Confederate flag.

Data by Pew Research in June 2017 found that the American image was suffering a decline thanks to unpopular policies of the Trump administration and the president's character. Just 22 percent of respondents internationally — out of a sample of 37 countries — had confidence in the current president, compared with 64 percent for his predecessor.

It doesn't help that Markle is no fan of Ivanka's father. The Suits actress has publicly called the president a misogynist, and joked about staying in Canada if Trump got elected. And sources told Us Weekly that Prince Harry is privately critical of the president as well, saying Trump was a "serious threat to human rights," though The Independent reports that Kensington Palace denied that claim. But Markle was a fan of Ivanka, at least at one point in time.

Whether or not the first daughter — or anyone in the Trump family — will get an invite remains to be seen.